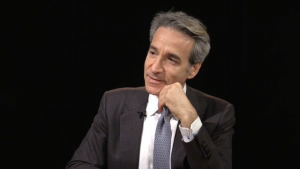 Andrew Blauner is a busy man. Head of his own successful literary agency for 25 years, he represents authors you might recognize from the New York Times bestseller lists as well as award-winning Jewish Book Council favorites. His agency is particularly known for representing groundbreaking works on sports in American culture. On the side, he’s edited six anthologies on a variety of current topics.
His latest, “The Peanuts Papers: Writers and Cartoonists on Charlie Brown, Snoopy & the Gang, and the Meaning of Life,” has quickly gained national attention. Blauner has appeared onstage and in conversation with some of the book’s well-known contributors like Jonathan Franzen and Mona Simpson. He has also presented in a particularly hallowed place for “Peanuts” fans, The Charles M. Schulz Museum and Research Center in Santa Rosa, CA, which he calls “in a word, awesome.” In this interview, his comments have been lightly edited and condensed for length.

Why “Peanuts” and Charles Schulz?
In the main, I’m a literary agent, but once in a while, as labors of love, pet projects, I put together these anthologies on topics and themes that are near and dear to me. Very little has been so consistently near and dear to me, for 50 years now, as “Peanuts” has.
Since its inception in 1950, “Peanuts” has become one of the most enduring and endearing things that we have, and something precious and rare on which we can almost all agree, irrespective of all else on which we may diverge.
When Schulz died in 2000, “Peanuts” was being read in 75 countries, 2600 papers and 21 languages. In all, well over 18,000 strips appeared over the course of almost a half-century, making it, according to Robert Thompson, a professor of popular culture at Syracuse University, “arguably the longest story ever told by one human being.’’

Can you give us some background on how you grew up?
How I grew up? Good grief, where to begin? Well, in the beginning…and throughout, really, up to this day, I was and am a secular Jew, culturally Jewish. But I was also the first male in my family not to have a Bar Mitzvah. And it was something of a rite of passage of its own, finessing and finagling that. I was born and raised in Manhattan, and went to Collegiate School, as did my two older brothers.
Were you always a “Peanuts” fan? And do you have a personal favorite strip?
Oh, comic strip-wise, this may surprise, but I was not a fan, never got into it. The lone exception was “Peanuts,” and even with that, my gateway was, as it was for so many, the holiday television specials.

You actually met Charles Schulz in person. What was he like?
He was warm, welcoming, wonderful. A bit shy, a bit sad-seeming, but sweet, humble, thoughtful, genuine, winning.

Do you think any of the biographies or documentaries that have come out since his death in 2000 portray him well?
My friend David Michaelis wrote the definitive biography of Schulz; it is far from hagiography, but David is one of the best writers, and specifically biographers, of our time.
How did an anthology on “Peanuts” get so serious?
“Peanuts” was serious from the outset, really, when you look at the strip and think about it. It was a strip created more for grownups than children, even though it’s populated exclusively by little kids, a dog and a bird. The topics and themes are serious, even if the characters are comic and comical so often, in so many ways.
Why do you think Schulz, more than other early comic strip artists of the Sunday funnies era, inspires people to this level of analysis?
In the 70 years since the comic strip “Peanuts” first appeared, countless other comic strips have come and gone. All the while, seamlessly, utterly unconsciously, some of the themes and touchstones of “Peanuts” have woven their way into our vocabulary, our views and voices, our senses and sensibilities. It’s a talisman we take with us, all of us, wherever we go, celebrate with, and perhaps cling to all the more tightly in times of trouble.
Until “Peanuts” came along, comic strips were largely populated by grownups acting like children. One of the refreshing revelations, part of what’s made it resonate so strongly for so long and for so many, is that it’s a world of children who act, talk, think and feel more like adults.

How did you choose contributors for this book? Did you know you wanted cartoonists in it from the start?
The word “anthology” comes from the Latin word, loosely translated, for “bouquet.” I wanted this book to be that. A love letter, really, to “Peanuts.” But in order for it to work, it needed a diversity of voices, otherwise it might end up homogeneous, monotonous.
I started with the archival material that I wanted to include, the pieces by Sarah Boxer, Umberto Eco, Jonathan Franzen, Maxine Hong Kingston, George Saunders, and built out from there. Some contributors, such as Gerald Early, Adam Gopnik, and Rick Moody, have become sort of go-to people for me, as they have so much to say that’s interesting that I’d go to them for a collection on almost any subject. They always deliver, never disappoint.
Then, there was a conscious effort to go to some cartoonists/illustrators who write well in addition to drawing. I just thought, or hoped, visual artists could manifest contributions in their prose that those who typically deal only in prose would not.
One of the quirks of the book is that I never intended for there to be any actual “Peanuts” strips in it, in part because readers see the iconic touchstones in their minds’ eye—Linus’s blanket, Charlie Brown’s shirt, Snoopy’s doghouse, Schroeder’s piano, Pigpen’s cloud—and I liked the challenge, if there was one, the gauntlet for the contributors was to write about “Peanuts” without using those actual visuals. Anyway, putting the premium on including cartoonists yielded the great fortune of getting Hillary Campbell Fitzgerald, Chris Ware, Seth (Gregory Gallant).

Were you striving for any particular balance of authors or topics?
I liked the idea of including great writers known primarily for fiction, so we have Ann Patchett and Mona Simpson. I went to others for pieces on specific aspects of “Peanuts”—for example, Peter Kramer on Lucy and psychiatry, Jennifer Finney Boylan on “Outsiders.” There are two poems in the book, one by Jill Bialosky and one by Jonathan Lethem, in part because there is a certain poetry to the strip. And, in some cases, I invited one person to contribute and that person suggested someone else, who turned out to be a terrific addition—for example, Susan Cheever led me to Clifford Thompson.

Was there anyone else you wish you could have included?
Yes, plenty of people, including President Obama.
What surprised you most about this book, both when you were putting it together and reading contributions?
That not everybody loves Snoopy. That there is more love out there than I realized for Charlie Brown and Linus. That so many different people wanted to write about so many different aspects of the world of “Peanuts.” That so many people said yes when invited to contribute.

Has the success of this anthology surprised you?
On one hand, yes, it has surprised me, very happily so, because I know what a Sisyphean task it is for publishers to sell books and especially sometimes anthologies. But then again, it’s “Peanuts,” and it has one of the best publishers and some of the best writers in the world.

Did any of the contributors tell you personally why they wanted to put their five cents in?
Sure, but better to put the nickel’s worth in the book than in Lucy’s jar.
What do you see as the lasting value of “Peanuts” for the next generation?
That is hard to answer. But I have a son, who is five and five-sixths, and he already loves “Peanuts,” so, hoping that, that continues with him, his children…
Andrew Blauner will be appearing online at the 2020 Jewish Book Festival on Tuesday, December 1 at 7:00 p.m. For more information, or to register for this event and order signed books, visit www.jewishsgpv.org/jewish-book-festival or call the Jewish Federation office at 626-445-0810.

Deborah Noble is a contributing writer to Jlife magazine.

Join a Virtual Tour of Israel