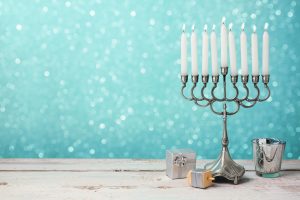 I had a determinedly blasé attitude toward Hanukkah growing up: America’s retailers were not going to cause me to accord this minor Jewish holiday with the equivalent importance of Christmas for Christians.  Hanukkah was going to be for me what it had been for Jews throughout the centuries: lighting the Hanukkah menorah each night for an 8-day period during the darkest time of the year, and eating potato latkes.
To get an understanding of how minor a religious holiday Hanukkah is, one just needs to open a traditional siddur and look at the tiny letters introducing “al hanisim” (“for your miracles”), the special Hanukkah insert recited during each of the 3 daily Amidah prayers. The introduction says that if you forgot to put in the special insert, you do not repeat the prayer. Apparently due to the fact that Hanukkah has none of the restrictions of the Sabbath or the major holidays, it is close enough to weekday time so that if you prayed a completely “regular” Amidah, you fulfilled your religious obligation (whereas if one forgets to give the Sabbath or major holiday its due during the Amidah, one needs to repeat the whole lengthy prayer again). A person taking their cue from the siddur, then, would not be overly persuaded of Hanukkah’s relative importance in Judaism.
All this goes to explain why it has taken me almost a quarter of a century to see the obvious: Hanukkah is “the favorite religious holiday of secular Jews” (as a writer in Haaretz put it).  Hanukkah in Israel has managed to capture the hearts of all Israelis, religious and non-religious.  How did this happen? The answer starts as early as infant care: In almost every one of these programs, even in the heart of secular Israel (where I now live), children as young as a few months old come home with menorahs with their names on it and are taught all the various Israeli Hanukkah songs (and there are a lot of them!). These songs and customs get repeated all throughout grade school and beyond—so that by the time an Israeli turns into an adult the Hanukkah tradition touches some warm place in their being.
Israeli society in general promotes Hanukkah by the following: donuts (not just jelly but also fancy ones) start appearing in bakeries more than a month before the holiday, children are off from school (which often means that parents will take at least some vacation days during Hanukkah), there are candle lightings at most public events and workplaces, and if you are going to a private lighting at the home of friends or family, it is totally acceptable to leave work at 3:00 or 4:00 in the afternoon—and no eyebrows will be raised if this occurs several times during the holiday.
At the communal lighting I organized in my building on Hanukkah last year, I was glad to see several people who obviously had left work early in order to make it to our apartment by 6:00 p.m. When I explained that we followed the Ashkenazi custom and that everyone could light a menorah (traditionally, Sephardim just have one menorah per household), I was happy to see that all present wanted to light—and knew the blessings in Hebrew. Okay, okay, so the Israeli melody for Hanukkah candle-lighting is not as good (to my ears) as the American one, and many Israelis mistakenly say “amen” at the end of their own blessing (a redundancy), but the point is: here was a group of primarily secular Israelis engaged in the key religious ritual of the holiday.  Who wudda thunk it? Even without any association with Christmas, Hanukkah has achieved fabulous popularity in Israel. Maybe there is something special about this holiday after all.