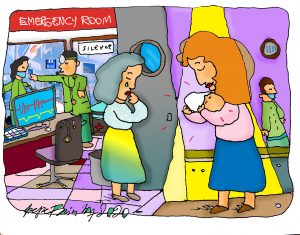 Perhaps an understatement, 2020 has been a year of surprises. “Know-it-alls” have been outed as “know-nothings.” Primary and secondary education is piecemeal and unstructured. Standards of living are being reassessed. Many relationships have grown strained. And we hope, hope, hope that our efforts toward protecting our health and the health of loved ones is sufficient.
The husband and I try not to talk too much about the near seismic shifts that have affected our lives. My car sits dusty and undriven in the communal lot with nowhere to go. After seven months of no in-person interaction with family members, the on-line meeting experience has grown stale. Instead of sharing, emoting, growing in our relationships, we now relate information and statistics.  “What did you eat today, Mom?”; “Do all of the girls in your class do their Zoom assignments?”; “I won’t talk to you until you see ‘The Queen’s Gambit!’” I work sporadically, whenever the government shouts “Go!” and shut down with equal haste. Even the resident spinning-bike and bench press are beginning to rust. If not for the recent acquisition of a lively two-year old Border Collie/Saluki, I would probably not switch out of house-slippers. The best walks are at 5:00 a.m.  The world smells sweet, the streets are clean, empty, and reverie comes easy.
During the pre-dawn walks, I think of my grandson, the “one who is sick.” The one for whom Whatsapp tehillim/psalm groups were formed. The one who is the topic of medical study in research institutions. The one who was not expected to live. Yes, that’s the one.  “Y” is the child who defied odds, lived past expectations, met and surpassed typical milestones and melts hearts with his infectious smile and boisterous laugh. He is the child who I only held twice because in those pre-Covid days—even while masked – I feared infecting him. I would not hold him despite my daughter’s encouragement.  I feared that I would love him so much that I couldn’t bear an unbearable outcome. My strong-as-iron, wise and mysterious daughter seemed to understand. She understood so much. She carried so much.
I cannot imagine what her 5:00 a.m. mornings must have felt like.  Shielding three other children from the uncertainties, the “what ifs,” comforting them when they returned home from school deeply upset because of something they overheard from classmates about their sick baby brother.  She was the embodiment of clarity and strength in a world of IV drips, hospital beeps and whispers. Her soft, vulnerable underbelly remained hidden from me,  cowering, powerless, pained.
And so it was that on the eve of the Festival of Light, our multi-nation prayer-group, initiated on May 7, 2018, was stunned with the blessed news that all of Y’s benign tumors, save one, are gone. He can live a long and healthy life. We were encouraged to keep him in our prayers but the group is being disbanded.
Many women wrote to say “Thank G-d! You must be so relieved!”  I continually reply with, “Yes.  It is a miracle.  I am so grateful.”
What I do not say is that it was never about me and that the terror, sadness and impotence born of not being able to “fix it” rendered me numb. And ashamed.  That I could not wrest the pain from my daughter’s home, bake cookies, kiss the boo-boo and promise illness-free tomorrows but, instead, merely sat on the sidelines and observed what I could not repair. An overseas grandma can, at best, provide cyber-succor when a holy family is in crisis.
Forget the gaudily wrapped presents.  Take or leave the sufganiyot and potato latkes. Hanukkah is all about light.  Light that dispels darkness, regaling us year-in-year-out with a message about illumination when days are bleak. Hanukkah is meant to be lived, absorbed into our DNA and revisited at will when all feels hopeless.
A collective narrative is ours for the making. Despite pandemics, ugly politics and uncertainties where once we felt safe, it behooves us to remember that there is always a small, flickering flame that can be fanned with faith and a deep-seated understanding that hidden blessings are waiting to be both discovered and kindled.

New York native Andrea Simantov has lived in Jerusalem since 1995. She writes for several publications, appears regularly on Israel National Radio and owns an image consulting firm for women.