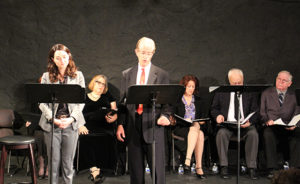 FINDING MEANINGFUL AND and accessible ways to commemorate the Holocaust poses a challenge for Jewish institutions.

Last year the Pasadena Playhouse partnered with the Jewish Federation of the Greater San Gabriel and Pomona Valleys to try something new – a staged reading of “Righteous”, a Holocaust remembrance play, as part of the “Remembrance Readings” program started four years ago by the National Jewish Theatre Foundation. This program encourages theatre companies in the United States to perform staged readings of Holocaust-themed plays around the time of Yom HaShoah, Holocaust Remembrance Day.

“It was an opportunity to be part of something bigger than us,” says Danny Feldman, Producing Artistic Director of the Pasadena Playhouse, a venerated theatre in Pasadena, celebrating its 100th birthday this season.

“Many people, including Jews, don’t commemorate Holocaust Remembrance Day anymore or feel that it is important. We don’t want them to forget. Events are held in synagogues and other Jewish organizations and few people attend, particularly the younger generations,” says Cantor Judy Sofer, the Jewish Federation’s Cultural Arts Program Coordinator.

“The idea of doing it in a play setting… has more impact because it’s also more open to the public. That makes it more unique than a traditional commemoration,” says Jason Moss, Executive Director of the Jewish Federation.

When Danny Feldman took over the reins at the Playhouse at the end of 2016, he sat down with Jason Moss to discuss various opportunities for collaboration. This partnership came to fruition last year when the JFed Players, the Jewish Federation’s community theater ensemble, performed “Righteous.”

Written by playwright Jeff Cohen, “Righteous” debuted the same day in Lincoln Center in New York. The response was huge. Patrons flooded the theatre to hear the story of a German industrialist who alerted the West to the Final Solution.

“We had such a great response – so many people wanted to see it – that the Playhouse sold out and had to turn people away,” recalls Sofer. “It was really wonderful to see that so many people cared.”

This year’s production will be held in the main theatre, which seats 650.

“Theater has this amazing power to bring community together, where you’re sitting in a room with strangers to experience something together,” says Feldman.

The opportunity to observe Yom Hashoah in this way, in this scale, is especially significant for Danny Feldman, who, like so many others in our community, lost several of his family members in the Holocaust.

This year, Sofer directs “Judgment at Nuremberg,” a courtroom drama adapted for Broadway from a successful 1961 movie, which tells the story of a military tribunal in Nuremberg, Germany, in search of justice after World War II.

The themes of justice and hope were important to Sofer and Feldman in choosing a play.

“We want them [patrons] to walk out feeling that at least there is some hope that justice will prevail,” says Sofer.

Jews in Israel and communities in other countries observe Holocaust Remembrance Day or Yom HaShoah on the 27th of the Jewish month of Nisan, one week after Passover and one week before Independence Day.

This one-time only performance of “Judgement at Nuremberg” takes place at the Pasadena Playhouse on Sunday, April 8 at 1:00 PM. Tickets can be purchased by calling 626.356.7529 or be visiting www.pasadenaplayhouse.org.