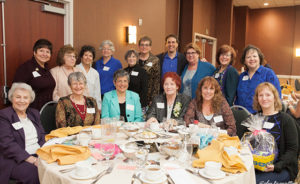 This year’s honorees do everything from leading oversight committees to greeting newcomers. Some are high-profile, some introduce new programs or address critical needs, others work to make sure nothing and no one falls through the cracks.

Pasadena Jewish Temple and Center (PJTC) Sisterhood honoree, Ginny Blitz, has worn many hats as a volunteer, helping her congregations consistently through several temple mergers—from Temple Shaarei Tikvah to Shaarei Torah (CST) to PJTC. She exemplifies the idea of making a difference both officially and behind the scenes, says Sisterhood President Judy Callahan. “Ginny is one of those people who will do whatever needs to be done. She’s the recording secretary for Sisterhood and she’s done a lot of onegs, and she also volunteers in the office. It’s easy to honor the showy people who lead board committees and so on, but the behind-the-scenes volunteers like Ginny keep things running.”

Anita Landau, a former Woman of Valor, agrees. “Ginny is very quiet but she’s extremely efficient, and she comes to all the events. When CST merged with PJTC, she really helped me on the Onegs Committee.”

Carol Ozer, Temple Beth David’s (TBD) Sisterhood President and a member of the Women’s Forum Committee, says that honoree Susan Ivory is another prime example of this dedication. “She always has a smile on her face. She’s helped spearhead our bagel breakfast series, as well as a program on Jewish relationships, and served as TBD’s liaison to the Jewish Book Festival Committee last fall. She’s a leader and TBD is very proud to have her as a member of Sisterhood.”

Joan Gerard, a longtime member of Temple Beth Israel-Pomona (TBI), started out as room parent and field trip chaperone for the religious school. As time went on, she co-chaired a major fundraising effort and served on the Youth in Israel and Campership committees. She joined the Rabbinic Transition Team, the Crown of a Good Name committee and served as Publicity Chair for the synagogue.

“The best way to describe Joan is that she’s a mensch,” says TBI’s Executive Director, Art Beckerman. “‘Mensch’ in the sense of being dedicated to all her activities for Temple. She’s extremely effective at getting things done, but she goes about her volunteer work for the congregation in a low-key manner.”

Christine Akin Tabac joined TBI only five years ago but in that time she has taken on big challenges. Deborah Pruitt, the director of TBI Preschool, says, “Christine has been a dynamo of energy and commitment.” As a preschool parent, Tabac chaired the Preschool Education Committee and organized children’s and family events for several years before joining TBI’s Board of Trustees, where she serves as Vice-President for Finance. Beckerman adds, “She’s very innovative, always looking for better ways to do things.” As an example, he explains that a series of security concerns last year led Tabac to join the TBI Security Committee. “She drove major improvements for the preschool with a new fencing system and closed-circuit cameras.”

Susie Ribnik, Temple Sinai of Glendale’s (TSG) Sisterhood’s honoree, is similarly proactive as Sisterhood Treasurer and Chair of the Fundraising Committee. She started by helping with the annual fundraisers and silent auctions but has taken on more responsibilities. Last month, she led the efforts for TSG’s 90th Anniversary Fundraiser. She also chairs the Sisterhood’s Rental Committee to help families coordinate logistics for b’nai mitzvah and other celebrations and created the position of Teen Helpers for events.

Two other valued and versatile honorees are Paula Rubin of Temple Ami Shalom and June Brodie of San Marino ORT. Rubin is Temple Ami Shalom’s Sisterhood President and serves on the Board of Directors, in addition she also runs the temple gift shop and works in the kitchen to make the kiddush lunch every Shabbat. Brodie, who joined ORT 35 years ago, is the organization’s longstanding tribute chairwoman, sending out condolence cards and certificates for tributes as small as five dollars, and has raised thousands of dollars for the ORT network of schools.

The Women’s Forum this year also has the unusual pleasure of presenting a double honoree. Rochelle “Shelley” Klein has been named as a Woman of Valor both by Temple Sholom of Ontario (TSO) and by the Sharon Group of Hadassah. One of Temple Sholom’s most recent members, joining in 2015, she has thrown herself into a variety of synagogue activities. She serves as Recording Secretary for the TSO Sisterhood Board and is one of the crew of women who prepare onegs and kiddushes. She’s also Recording Secretary for the Sharon Group of Hadassah and helps represent the group at regional meetings.

As PJTC’s Judy Callahan notes, “Even in this day, with a more egalitarian culture, there’s still an inherent value in groups of women getting together socially to make a difference for the Jewish community. So the Women’s Forum still has an important role in recognizing women’s contribution.”

The 2018 Annual Women’s Forum will celebrate the 2018 Women of Valor Thursday, March 22 from 9:15 a.m. – 1:00 p.m. at the Courtyard Marriott in Monrovia. The featured guest speaker will be Cheryl Temkin of Women of the Wall. For reservations and more information, contact the Jewish Federation office at 626-445-0810, federation@jewishsgpv.org, or visit www.jewishsgpv.org/our-community/community-calendar/2018-annual-womens-forum.