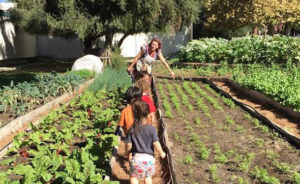 WELCOME TO OUR SERIES that takes a special look at “Women Over Eighty,” a project spearheaded by Janice Pais of Pasadena Jewish Temple and Center, (PJTC) that focuses on the unique qualities of the members of our Jewish community. Specifically, the lovely ladies that were recently celebrated at the Annual Torah Fund luncheon for PJTC to recognize “Women Over Eighty.” The Sisterhood of PJTC worked with the youth of its Louis. B. Silver Religious School on a special program designed to bring generations together. The students met with the women that were celebrated and interviewed them about their lives. We encourage you to learn more about these wonderful members of our community. Enjoy.

Henny Moskowitz: A Survivor Amongst Us

IN MY FAMILY we talk about being Jewish all the time. Whether it’s about which Seder is funnier the traditional Ashkenazi one or the Persian one which involves whipping each other with scallions during Dayenu, or how my grandparents lived in what is now Israel. We have pictures of them as the young Israelis–they look great against the backdrop that was their new country.

What we don’t talk about often is the Holocaust. It’s not on purpose like there is no rule that we can’t talk about it. But, I do notice that the topic is a dark one that is skipped at times when we focus on my grandparents and the great-grandparents heroism in building a homeland for Jews. However, if you look closely at those pictures from early Israel, where both of my grandparents were born, one can see what isn’t initially obvious; there are not many of them. Every picture seems to have the same people; my labor Zionist great grandparents who immigrated to Israel from Poland and my paternal great grandparents–also from Europe. Their offspring are pictured, but there are few “cousins” and no aunts or uncles. I now know why. They’re not pictured alive and well in Israel because they didn’t survive the Holocaust. This is a sad part of my family‘s history. It seems we focused on building and moving forward-my great grandfather served in the 1948 war of independence and my grandfather was in the 197 war-as a way to stay strong. We perhaps inadvertently kept the light off of the room that houses the Holocaust because it may be too much to think about. Too difficult and painful to experience. So, I decided that interviewing someone who escaped the Holocaust in my own community of Los Angeles was a way to turn the light on, bring the Holocaust into our lives and also allow us to visit the part of my family’s difficult history more often.

Henny Moskowitz was born in 1929, in Germany-just four years before the Nazi party would come to power and change the history of the Jews forever. Her life outside of threat was brief as they fled Germany when she was just 3 1/2 years old to Romania.

I guess it was safer for Jews, but she describes anti-Semitism at their home as well. Specifically, she recalls signs that read; “No dogs and Jews allowed“ Henry stated, “this was quite scary for me to see.”

Her family’s stay in Romania was brief as they decided to leave Europe altogether when she was seven years old, just as my great grandparents did in Poland and Hungary. However, Henny’s family did not immigrate to Israel, which would not officially be a country for more than a decade. Instead they made the long journey to the United States, a country that promised freedom and protection.

Henny and her family settled in the Los Angeles neighborhood of Boyle Heights in 1938 the same year that the Los Angeles Jewish Community Council the present day Jewish Federation of Los Angeles was incorporated. A wave of eastern European immigration between 1918 and 1924, resulted in a Jewish community in Los Angeles. The influx decreased with the Johnson-Reed Immigration act of 1924 which established annual quotas for immigrants from Europe. Nonetheless, Jewish immigrants like Henny and her family, continued to arrive in Los Angeles and were drawn to neighborhoods with established Jewish communities, like Boyle Heights. To illustrate the change in this neighborhood in the era of Henny’s immigration, it’s helpful to look at the number of Jewish families during the first half of the 20th century. By roughly 1910, they were only three Jewish families in Boyle Heights. This number grew to 1,800-plus in the next decade. By 1930, close to 10,000 families resided in the neighborhood where Henny’s family lived.

Despite living among a large Jewish community immigration was still a difficult process for Henny who describes learning English as the main challenge. “I would mix up words like a “soldier”and “shoulder.” My mother also immigrated to the US at the age of seven, not from Europe, but from Iran also due to persecution. She also had to learn English. The challenges of communicating seem to be a universally difficult aspect of immigration.

Like my mom though, Henny did learn English and made friends along the way that are still her friends. She describes meeting some of the house Hashomer Camp at 12, my age. I wonder if my friends from Kadima Kinnus will be my friends when I’m Henny’s age.

What I found interesting about Henny’s description of her childhood was although they were poor they seem to still have fun. She describes playing stoop ball on the sidewalks, jacks and hopscotch. She and her friends may paper dolls. They also celebrated Hanukkah differently by playing with nuts, shooting them across the floor. I think I would get in trouble for that. It doesn’t seem like they got it gifts as we do, but oranges for a special treat.

She also began roller skating around my age and moved on to ice-skating. I’ve been ice-skating since I was nine and play hockey, so it was neat to have this in common. She like me, went to Hebrew School after “normal” school. She told me she mostly got into trouble at Hebrew school. I wish I could’ve seen that.

World War II had an affect on her family, as it did on most families. Her brother joined the Navy after graduating from high school and served in the Medical Corp. Henny and her family were close knit and moved to the post that she was assigned to so they could be close.

I really enjoyed meeting Henny and seeing about what she remembered from Germany and Europe in the years leading up to the Holocaust. Having her here in our community and listening to her story reminds us all that Holocaust was not that long ago. If you don’t believe me, I can introduce you to my friend, Henny Moscowitz, who will tell you about the signs that said, “No Dogs or Jews.” The past is past, but it seems closer now after my afternoon with Henny. 

I really want to say thank you to Jan Pais for including me in this project. I play violin in the Jewish Youth Orchestra and we are playing “L’dor Vador,” generation to generation and being involved in this project makes one feel like I’m living those words and that music.

I really enjoyed speaking with Shirley Hoffman. I was very curious about her childhood. Shirley talked about playing with her friends and spending time with family. Friendships were always very important to Shirley, and still are. She and her friends like to play Monopoly.

I’ve talked with my own grandparents about how there were few opportunities for women in the 30s and 40s, and Shirley agreed, but she did work as a young woman. Her first job was working in a shoe store. Shirley is known being a very sharp dresser and she told me she always loved shoes. Later on, she worked in a bank. Shirley said, “it was difficult when my first child was young, I went through some difficult times. But I had my community around me and that always made me feel better.” This really made me feel good that the community I am part of was so helpful to Shirley.

It was very interesting to speak to Shirley about her different jobs. She told me, later in my life, “I owned a business with my late husband, and did end up taking over the company when he passed away, the company is Superior Chemical.” I can’t imagine running my own company I bet having so many years working different jobs raising children and being a strong voice at the temple give Shirley a lot of confidence to be a business owner.

I really wanted to know about how Shirley celebrated the Jewish holidays. Well she did celebrate the holidays, with Passover being her favorite because her family would all get together. They all still get together for Passover, so it is still her favorite.

So, I’m studying World War II right now so this was a time period that I wanted to talk about with Shirley, and she had a very dramatic story about that time. Her sister Thelma Berman, was a nurse and was on a ship at sea. That ship was torpedoed and many people lost their lives, but Shirley’s sister survived, and actually became a high-ranking officer. Of course, that must have been a very scary experience for Thelma, the whole family.

I am also reading the book, “Night,” by Elie Wiesel right now. I can’t imagine living during that time. I was relieved to hear that Shirley’s sister was OK, but sad to think of all the people who didn’t survive the war. Shirley and I spoke a bit about anti-Semitism, and as Shirley recalled, “it was all around us. My father worked for the Anti-Defamation League, so we would find out about all the stories and cases from his work.” My friends and I at my art school are quite aware of what is going on in the world, and we are as politically active as we can be as teens. Just as Shirley’s family work to make a better place for us, I hope my friends and I can do the same for future generations.

It was really nice to talk to Shirley about the Pasadena Jewish Temple and Center. I have been at the temple my whole life, and I know that temple life has always been so important to Shirley. She said, “I have always been very active in my temple. My whole family has. This is where I have my community, my friends.”

I wanted to know the best decisions Shirley ever made, and without any hesitation she said, “to marry my husband. And I am very grateful to have my children, and my daughter-in-law. She is always helping me. She is always here for me.” And for my final the L’dor Vador, I asked Shirley what piece of advice she would like to pass along to someone my age, she said very definitively spend time with your friends. Friendship is the most important thing in life friends and family are everything.

I feel so lucky to have had this opportunity to talk with Shirley I also found out that because of Shirley’s family being so involved in the temple, the cards in honor of mitzvahs and milestones are sent out under the Lena Berman Tribute Fund, named for Shirley’s mom… what a special legacy.