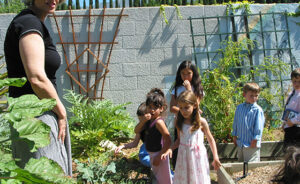 The news that Weizmann Day School will close its doors at the end of the current school year came as heartache for the alumni families and dedicated supporters who met in February with board President Avi Bilu after months of attempts to ensure sufficient enrollment.

“Weizmann was entering its ‘double-chai’ year when we started. It was a painful decision,” he says. “It wasn’t for lack of trying.” But, the board decided unanimously and wanted to give student families and staff as much notice as possible instead of waiting until summer, he adds. Head of School Lisa Feldman says Weizmann has already ensured placement for all its students in other schools for next year, and she’s working to find openings for her staff as well. Weizmann’s approach even in closing stands in sharp contrast to that of other schools in similar straits, says Bilu, and stems from its longtime culture of building community.

A handful of local families started Weizmann in 1983 as a Jewish community day school, nondenominational, coeducational, egalitarian and independent of any one synagogue. Alan Whitman, an early Weizmann parent and board president, says, “We wanted our kids to get a good Jewish foundation together with a good secular education. It was a way for all of us to reinforce our children’s Jewish identity beyond just the synagogue.”
The start was rocky, with only about 30 students and education to 4th grade. ”We came in with no funding and no facilities like a science or computer lab to really entice families,” Whitman says. “That came later.” Instead, Weizmann offered what other schools were starting to abandon—small class size and personal attention, hands-on and integrated learning, visual and performing arts, and at its core, Jewish values of character and community.

“We were big fans of Weizmann,” says Nancy Carlton. “It was a great environment. A kindergartner could play with a 6th grader, and every student got the personal attention they needed to grow as people.”
Her husband John adds, “One of the things we remember is how the parents actively supported the school, physically maintaining it and making improvements. Parents bought carpeting and blinds for the classrooms, and came to the school for paint days. There was a big community aspect to it.”

Feldman, who took over as Head of School in 2003, also credits Lori Serna, Weizmann’s longest-serving staff member, with attracting families through her After School Adventures program of crafts, mini-classes, games and theme days. The school stabilized, gaining both Builders of Jewish Education and Western Association of Schools and Colleges accreditation, and it grew. Despite its small size and budget, Weizmann had two expansions – one into a K-6 grade elementary school in the 1990s and again in 2009 when it added a middle school at family requests. It also welcomed the community’s interfaith families, says Shelly Freedenthal, a parent, longtime board member and now teacher. “The fact that we could find a Jewish school in this area when we had young children was life-changing, fantastic for us, and I’m so sad other families in our situation won’t still be getting that opportunity.” One Kuwaiti family even sent their son to Weizmann early on before there was a local Muslim school.

Weizmann’s programs have been groundbreaking for their time and also helped build community. Students learned to speak and read Hebrew ulpan-style from kindergarten on, which has attracted Israeli families, and everyone does a yearly science fair experiment. Upper elementary students study Shakespeare in depth for language arts and were performing a near-full-length play for the community each spring long before schools elsewhere attempted it, and it’s a highlight younger students looked forward to. In the early 1990s, Ellen Dinerman set up morning kindergarten and at the same time, a school wide art curriculum featuring major artists like Picasso or Georgia O’Keefe each year, even for kindergartners. “Art is for everyone,” she says. ”They really get it. Kids can learn anything you teach them.” All the projects were displayed gallery-style at the annual spring art and science fair, which she says is vital for students to see the value of their work.

Programming has tied the school community together. Kindergartners have 6th grade buddies, and parents of older students mentor new families. Parent and community volunteers judge science fair projects, create fundraising campaigns, help with costumes and lead lab or theater tours. The school has led services in Hebrew at area synagogues and performed concerts in downtown Pasadena in Hebrew and Ladino. Students plant and study the school garden, and they’ve created murals for it and for Pasadena Jewish Temple & Center and Eaton Canyon Nature Center. Integral to Judaic Studies are monthly mitzvah projects like making packages or serving dinner for Union Station Homeless Services and stocking the food pantry at Friends in Deed.

Outside the local community, fifth and sixth graders have joined students from other LA Jewish day schools for AstroCamp and Catalina’s marine science program. The middle school also created Weekly Expeditions for Experiential Learning (WEEL) to enrich the curriculum, says Freedenthal. “We’ve tried to do something special once a week, either out of school or in-school with an expert guest speaker.” WEEL outings range from plays and museum exhibitions to a Geniza and camping trips, all at low or no cost and with parent transportation.

Most groundbreaking has been the longstanding interfaith exchange with St. Mark’s and New Horizon, two local Christian and Muslim schools. Feldman and Cantor Wendy Bat-Sarah reached out to both to join Weizmann students for the first annual Daniel Pearl commemorative concert in 2004. “It is beyond comprehension how beautiful it was to see them singing together,” says Feldman. The next year, Weizmann and New Horizon held a joint garden learning activity and set up a kindergarten pen pal exchange before the concert. A few years later, Pearl’s parents attended the concert and Judea Pearl spoke about his son and the importance of peacemaking. The connection with New Horizon grew into Faith and Friendship days among fourth graders, with field trips and activities where students explained their traditions to each other. In 2016 and 2018, New Horizon’s middle school invited Weizmann students to join them on a foundation-funded bonding trip to Washington, DC. Freedenthal says they flew and roomed together, visited the US Holocaust Memorial Museum and met California Senator Dianne Feinstein and Representative Judy Chu at the Capitol.

The way Weizmann has handled distance learning during the COVID-19 shutdown is right in line with its community- and student-centered values. Dinerman says teachers went home March 13th expecting to return to campus two weeks later, and quickly had to figure out appropriate ways—not all online, especially not for younger students—to keep teaching their students from home for the rest of the year. Families have picked up activity and craft packets from the end of her driveway, and the online class meets at a regular but limited time each day so students feel connected without getting overwhelmed. It’s a balance larger schools with more online tools and content have fumbled. Because it was new territory for Weizmann, Dinerman says, “I asked one parent with older kids in other schools how we were doing, and she told me ‘You are the gold standard.’”

Those of us who had our children at Weizmann have a lasting connection to each other thanks to its hardworking staff, teachers, board and parent volunteers. “I’d like to thank the founders of the school. I think we fulfilled their mission,” says Bilu. “The saddest part is that we can’t get together one last time this year to do Morning Circle and sing Hatikvah.”

Many alumni, including my daughter, Abigail Schlecht, are still in touch with each other years later, thanks in part to school outreach. “When I was still at Weizmann it felt like school,” she says, “but in the years since, it feels like family.

Deborah Noble is a contributing writer to Jlife magazine.