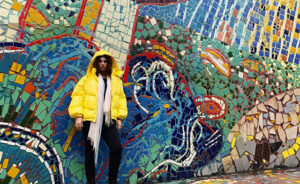 COVID-19 changed the world as we know it… for now at least. We are quarantined; we cannot see our loved ones nor can we travel. This has had a negative impact on almost everyone, especially those in the traveling and vacation business. Luckily, many of these companies and organizations thought of ground-breaking ways to keep their businesses running. This has a positive impact on consumers as well since they experience virtual trips.

One such person is Elie Haller Salomon of Edison, NJ. Salomon is the program director of Nefesh Yehudi Academy in East Brunswick, NJ, an after school Jewish studies program for Jewish children who attend the Hebrew Language Charter school nearby. Her program consists of children who are as young as kindergarten age, up until 5th grade. As Salomon states, “We are always trying to find innovative ways to help engage the Jewish identity, even more so, through virtual classrooms during this unprecedented pandemic.” Salomon saw on an educator’s forum that The Museum of the Jewish People – Beit Hatfuzot in Tel Aviv was offering virtual tours to schools who were in quarantine. Salomon reached out to them early on, and a month later they responded to her. Mr. Itamar Kremer, who is the director of the museum’s programs, gave her school a virtual tour of their museum. The students were able to catch a glimpse of the Gibburim Exhibit, which is about Jewish heroes. Salomon’s own four children, who attend the school, had seen this exhibit in person a year before, and were thrilled to “visit” again. Students and family members near and far joined in on the fun via Zoom.

Salomon says, “It was exciting for the grandparents to experience this with their grandkids. They missed being geographically close to them, but being able to see them react to the tour gave them an insight into their supplemental Jewish education that they would likely not be able to see otherwise. After this program, we invited the grandparents to participate in other virtual learning programs with us for Yom Hazikaron and Yom Yerushalayim.” Having people from all over the world enjoy the tour, gave an “appetite” for everyone to want to go there in real life at some point.

To find out more about Salomon and her after school program, please visit: http://www.nefeshyehudiacademy.com/ or visit them on Facebook at: https://www.facebook.com/Nefesh-Yehudi-Academy-421747184513686/.

To find out more about Itamar Kremer and the museum visit https://www.bh.org.il/education/team/.

Elly Bovarncik from Florida is yet another travel junkie. At just age 23, Bovarnick has had a lot of experience traveling. She traveled to Europe and Asia and was an au pair for a while. She was president of the Hillel at her school and had a passion for traveling ever since she could remember. Even with traveling virtually, Bovarnick states, “You can still feel like you’re traveling, while you’re stuck at home.” She has some helpful traveling tips on her blog called: http://www.thereshegoes.world/.

Bovarnick advises that before traveling (or virtually traveling), “you should think about what kind of vacation you would like to have, and do your best to replicate those feelings.”

Some tips she felt worth sharing were: 1- Walking: She loves walking when traveling and getting lost in unknown neighborhoods. You can walk around neighborhoods near you that are otherwise looked over when you are in a rush to get to work or school. 2- Food: Bovarnick recommends that you can go to authentic markets and cook up exotic foods, making it feel as if you are somewhere else. 3- Language: Bovarnick says you can learn a foreign language via duolingo.com, and then watch a movie in that language, making it feel as if you are in another country.

All the way on the other side of the world, in Israel, David Cherny an Australian native is a tour guide. Cherny has been living in Israel for the last 30 years and is a private tour guide for small groups of people from all over the world. He was an officer in the medical field and enjoyed traveling ever since he made Aliyah. His tours last anywhere between two days and two weeks. You can spot him driving his Rechev Eshkol (name of his tour bus), all over the country. Unfortunately, due to the COVID-19 outbreak, his last tour was given on March 13. Cherny states sadly, “I have suddenly found myself with no work.” Since then, he purchased a gimbal which is a way to stabilize a camera, making it easy to take beautiful 360-degree pictures. He markets these pictures and recordings to companies, as well as private people, and sells live virtual tours of sites around Israel. He gave virtual tours to schools in Melbourne as well as schools in Jerusalem. His latest project was giving a virtual tour of Jerusalem in honor of Yom Yerushalayim. His next venture is to give a tour of Masada to the Women’s Auxiliary Group, and he is super excited! His current motto is “Experience the magic of Israel from the comfort of your sofa.” He believes his pictures and recording can be sold to Jewish day schools as well as virtual camps for the summer.

To get in touch with David Cherny and have him show you around Israel, visit: www.holylandtourguide.com. He can also be reached at: david@cherny.org.

Rachel Stern is a contributing writer to Jlife magazine.

The Importance of Local Jewish Magazines

The Music of Our Lives