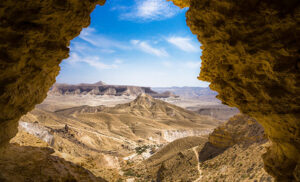 As a history buff, John Carlton, who is in the middle of his second year as the Jewish Federation of the Greater San Gabriel and Pomona Valleys’ President and Chief Financial Officer, relished the way Israel’s ancient sites are juxtaposed against a backdrop of a vibrant, dynamic and modern country. He was amazed at how much diversity there was in such a small space. All told, his recent trip, which lasted from June 18 to July 2, left him understanding more about Israel and its people, excited and hungry for more.
“I can’t wait to go back,” he said.

Carlton went to Israel on a trip organized by Cantor Judy Sofer, Jewish Federation’s Cultural Arts Program Coordinator. She has led a number of trips to Israel with her husband, who is Israeli.
Sofer, led two Shabbat services during the trip along with outside musicians, for the 33 travelers and hotel guests. It was the first trip to Israel for many of them, including Carlton.

The trip took the group all over Israel. Carlton said he enjoyed the blend of cultures—Jews, Arabs, Druze, Orthodox and secular.

“We went to Tel Aviv, which shows the incredible energy of the country with so many cranes, tall buildings, bikes and scooters,” he said. “That energy is all over the country, which is a vibrant and dynamic place.”

The group also went to Old Jaffa, Casaerea, the Ayalon Institute, the Beit Guvrin caves, Daliat El-Carmel (a Druze village), Haifa, Akko, Tzipori, the ancient walls of Tel Dan, the lush greenery of northern Israel, the Golan Heights, down the Jordan River to the Dead Sea and Masada. “We also went to Qasr el Yahud, where it is said that the Israelites crossed the Jordan River, the prophet Elijah ascended to heaven and Jesus was baptized by John,” Carlton said. “Pilgrims from all over the world come to see this place.”
Jerusalem was a major highlight for Carlton. As he said, “Yad Vashem was especially powerful, evoking deep sentiments about the Holocaust. During the Festival of Lights in Jerusalem, the walls of the Old City were covered with projections. Tens of thousands of people were there for the light shows. It was an incredible scene. We saw Bar and Bat Mitzvahs at the Western Wall and then felt the wall and prayed there.”

The group went south to Eilat and then Petra in Jordan. After spending many hours on the return trip looking at the desert landscape, Carlton observed, “The Negev is bleaker than the Mojave Desert, but people are growing date palms and other things in the middle of the desert.”

Carlton also observed that in the US, people think that Israel is a dangerous place. He believes that Israelis have gotten to the point where they are not oppressed by imminent danger. “They don’t give in to being obsessed with it,” he said.

He added, “I gained a more immediate understanding of modern Israel, a tangible feel for what Israel is. Everybody who went on the trip gained a better ability to relate to the Israel-America issue. People who are strong supporters of Israel, people who are less concerned and people who worry about the fate of Palestinians can relate to the reality of life in Israel. The trip provided more immediacy and relevance.”
Carlton concluded, “The existence of Israel is central to all Jews, whether they know it or not. Knowing that there is a homeland for Jews changes the character of Judaism by having a Jewish nation. The fact that Israel exists is central to Jewish identity all over the world.”

ILENE SCHNEIDER IS A CONTRIBUTING WRITER TO JLIFE MAGAZINE.