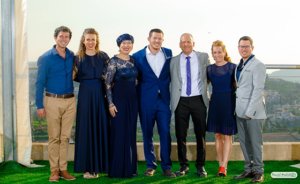 ON JULY 29 we celebrated the twentieth anniversary of our aliyah. When we first told people that we were moving to Israel, almost everyone was encouraging–aside from the four people who would now have to board a trans-Atlantic flight in order to see their grandchildren. Some friends offered us advice on the order of: Things might be very hard at first, but keep going and everything will work out.  In a variation of this, some people told us: During the difficult period of acclimation, think of your children–think of the great life you are giving them in Israel.

As it turned out, those who fretted about our start here needn’t have worried: Even our first year as new immigrants was a fantastic year. There was more to the words of those who counseled us concerning our kids, though not in the sense that successful aliyah can be predicated upon improving the lives of one’s children.  Especially for Americans (who can so easily return to their country of origin), if aliyah is going to last, it has to be as good for the parents as it is for the children. But aliyah does often put parents in a position of following the lead of their children.

As a proof-text for this column, I turn to Bruce Springsteen’s 2016 autobiography Born to Run. There are two examples in the book of the older generation dealing with something new called Rock ‘n Roll. In one case the older generation rejects the new and suffers the consequences: Thomas Appel counsels his son Mike, Springsteen’s manager at the time of his first hit album Born to Run (1975), not to accede to Springsteen’s request to renegotiate his contract.  Appel listens to his father, pockets almost all of the several hundred thousand dollars of income from the album, but then loses out on many millions when Springsteen severs their professional relationship.  In another case, the older generation embraces the new—and profits.  Irwin Segelstein, then head of CBS Columbia records, is contacted in 1974 by his son James, who was bowled over by Springsteen’s concert at Brown University.  Subsequently, however, James reads in the Brown newspaper that Springsteen is terribly unhappy about a lack of marketing support from CBS Columbia.  James calls his father to complain.   Irwin listens to his son, ramps up the publicity for Springsteen, and over four decades later, Springsteen is still with CBS Columbia.

Aliyah was our family’s new thing, and Sarah and I often had to let our children take the lead. We didn’t always get everything right, as when we ordered 10-year-old Nathan home at midnight on Lag Ba’Omer (his friends stayed up all night), or when I forced Ezra to miss a birthday party in favor of his regular judo class (a trauma for which Ezra has not yet forgiven me). But we got a lot right: We allowed our children to choose their secondary schools, we allowed (vertically challenged) Rebecca to choose basketball over track and field, and we supported Ezra’s quest as an under-age youth to milk cows on a kibbutz.  In general, our kids went where they wanted, did homework when they wanted (or didn’t), and hitchhiked wherever and whenever they felt like it.   While we might have made some of the same decisions in the States, being in Israel made us much more receptive to listening to our children.

Looking back now on twenty years of life in Israel, fittingly, one of my rewards as a parent concerns listening.  When I meet Israelis for the first time, I warn them about my terribly accented Hebrew. I tell them, “Yes, I know that I speak funny, but you should listen to my children.”

Teddy Weinberger, Ph.D., is Director of Development for a consulting company called Meaningful. He made aliyah with his family in 1997 from Miami, where he was an assistant professor of religious studies. Teddy and his wife, Sarah Jane Ross, have five children.