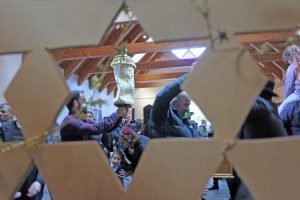 It is nothing new to observe that elitist environments often cultivate an aura of exclusivity where all but the most attuned members feel uncomfortable.
The nuances of behavior and speech that it takes to fit in within certain groups all but ensures a high level of implicit gate keeping where the vast majority of people are explicitly or implicitly left out. But what happens when certain elitist environments are, paradoxically, centered on inclusive ideals while retaining the same level of gate keeping of elitist groups in the past?
This question, one proliferating throughout wider American society, is equally relevant for our own Jewish community. As many of our Jewish institutions and organizations are embedded within the wider American social change, we must be careful not to fall into the trap of institutional gate keeping ironically centered on language of inclusivity.
Regardless of where one falls out on the American political and social spectrum, one thing is clear: People have increasingly less trust of institutions and leaders, often stemming from a sentiment that leaders and institutional insiders are wrapped up in their own elitism and disconnected from the wider populace.
This fact is, in my opinion, a detriment to wider society. Just like on a national level where we need trust in institutions—healthcare, media, universities, etc.—the Jewish institutional parallels are equally important for strong communal life. Yet trust and connection are waning, and it is a growing problem.
Shamus Rahman Khan, professor of sociology at Princeton University, has written extensively on this issue as it pertains to elite schools. Khan, in his book called “Privilege,” argues that whereas the upper and exclusive classes in the past taught specific social etiquette explicitly centered on creating insider knowledge used to weed out those on the outside, today this is no longer deemed acceptable.
Instead, Khan points out, elite education is centered on creating a feeling of “ease” in social circles where unwritten rules are both ubiquitous and heavily enforced. But this feeling of “ease,” Khan concludes, while centered on language of inclusivity and openness, is a feeling that one can gain only with years of experience and embeddedness as an “insider.” (For more on this point see “How the Bobos Broke America,” The Atlantic.)
Think about it. The constantly updated knowledge and background necessary to feel at ease in today’s progressive/inclusive institutions are ever growing and changing. To stay updated with the jargon, the etiquette, the ever-growing list of unacceptable questions or terms requires a near full time commitment, the type of commitment that only a handful of people are privileged enough to have the time and resources to absorb.
This is not to say, however, that these changes are all negative. Surely we can approach the world with enough nuance to understand that there has been much positive social change inspired by progressive environments. But as inclusivity becomes its own church, surrounded by an ever-evolving creed of insider lexicon and a growing list of heresies, it will become all but exclusive to the vast majority of individuals.
Inclusivity is surely a deep-rooted Jewish value. We must ensure that our communities are open to Jews of all types: Jews of color, LQBTQ Jews, patrilineal Jews, the list goes on. But creating a warm, open and inclusive environment is not something cultivated in mission statements, social media bios or truly any other top-down enforced model.
Rather we must continue to stress Jewish ideals of assuming good faith (dan l’kaf zechut) and being welcoming to all. And, following the lead of Hillel the Elder, work on tearing down any boundaries and walls to our Jewish community, from wherever those boundaries arise.

Rabbi Daniel Levine is the Senior Jewish Educator atOC Hillel, the Rabbinic fellow at Temple Beth Tikvah and a contributing writer to JLife magazine. He can be reached at Dlevine21@gmail.com

Recipes Summon the Past