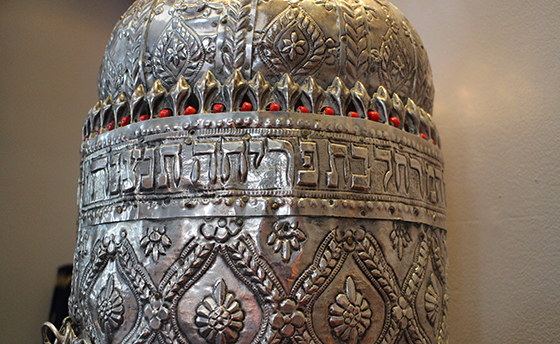 Throughout HISTORY, JEWS   have gone to great lengths to rescue their communities’ Torah scrolls in times of war or exile, and many of the scrolls in our community have stories to tell. This is one.

The Persian Torah scroll at Pasadena Jewish Temple & Center stands out immediately from the other scrolls whenever the ark is opened. Instead of the more common embroidered velvet mantle, you see a tall silver cylinder engraved with flowers and leaves, and crowned with a silver turban. This hinged case, called a tik, is typical of Sephardic and Mizrahi Torah scrolls used by Jewish communities from Morocco and Spain to Yemen, Syria, Iraq and Iran, and as far east as India.

One unusual feature is that the hard case does not come off for reading. The Torah scroll is permanently installed with one spindle set into each half of the velvet-covered wooden interior. As the two halves of the case open outward, they pull the spindles with them and spread out the Torah scroll between them. Two silver knobs on the outside of the turban turn the spindles to roll the Torah to the right place while leaving it protected.

Rabbi Emeritus Gilbert Kollin, who attended a Sephardic synagogue during his graduate study in Israel, explains some of the traditions surrounding this type of Torah.

This particular Torah scroll has had a longer and more personal journey than most.

Ray Nehdar, now in his 70s, was born in Tehran but came to Pasadena in 1957, when he was just 13 years old. His family sent him here to live with his older brother, who married into the Knell family and joined PJTC.

The story of the Persian Torah starts with their father Samuel, a leading import/export agent in Iran. He was closely connected to the government of Mohammed Reza Pahlavi and traveled widely throughout Iran. He was also devout.

Nehdar explains, “My dad had built synagogues in every province in Iran. His first wife died about 84 years ago, and in her memory he ordered a new Torah scroll from Baghdad. He had it kept in the city of Khorramshahr and every Shabbat he would read from it.”

A very prosperous port city at the mouth of the Persian Gulf, Khorramshahr was right at the border with Iraq, a natural location for international trade.

In 1968, Nehdar brought his parents to the US, and his father became a regular at PJTC. “When my dad came here, they loved having him read Torah.”

Marcia Alper recalls being astonished at Samuel Nehdar’s generosity. At about the time he arrived in Pasadena, she was made the first female member of the synagogue’s ritual committee, and she would also become the first female Torah reader. “Some of the other men disapproved of women on the bimah, and I assumed that since he came from a more conservative culture that he would as well,” she says, “but he was always very welcoming.”

Ray Nehdar’s father had left the Torah scroll back at the synagogue in Khorramshahr, but he hadn’t forgotten it. Ten years later, as the Revolution was starting in Iran, Samuel Nehdar took an audacious step by anyone’s standards and contacted the new government.

“He knew they’d go and destroy the synagogues,” his son recalls. “My dad wrote a ten-page personal letter to Ayatollah Khomeini and asked after the Torah scroll. He argued that since Khomeini was ordained he must have learned Hebrew and knew that the Torah was a holy book, so his Revolutionary Guards might have kept it. I mailed it out.”

Ray Nehdar says he didn’t think anything would ever come of his father’s letter. “But in two weeks, we received a big box at our house. They’d found the Torah scroll and sent it.”

His father’s timing was either fortunate or prescient, because only two years later, the Iran-Iraq war broke out, and Khorramshahr, the beautiful port city at the border, was one of the first casualties. Even if the Revolutionary Guard hadn’t already burned the synagogues, there might have been nothing left to find. And there were other ironies to come.

“When I opened up the box,” Nehdar remembers, “there was also a personal letter from Khomeini to my dad, but I threw it out along with all the packaging.”

Nehdar says he regrets that now. “Can you imagine? Khomeini’s letter, in his own handwriting, saying thank you for your letter and that yes he did study Hebrew as part of his religious training. But at the time, because it came straight to the house in Pasadena, I was worried about keeping anything in case Customs agents might come to the house and ask questions.”

Meanwhile, the Torah scroll itself confirmed his father’s worst fears.

“It was all black on the outside. They’d burned the synagogue. There were actually ashes on the Torah,” Nehdar says. “We took it to be cleaned, but everywhere we tried, they said, ‘we don’t do it.’ “

Finally they took it to PJTC, where Rabbi Maurice Galpert and his staff offered to take care of it. The synagogue sent it to a sofer and provided security for it.

Miraculously, the scroll turned out to be better protected than it looked, and proved the value of its beautiful silver casing. “The sofer had it cleaned, and the inside was unharmed.”

Nehdar says he became more involved at PJTC because of his father. “My dad was going to PJTC on Saturdays. I didn’t know Hebrew, but I went with him to carry the Torah for him because it was heavy.”

When Samuel Nehdar passed away, 25 years ago, Ray decided to learn to read Torah himself. “I took lessons from an Iranian rabbi and learned to read Hebrew and chant in my father’s style.”

Even though he and his wife have since moved to the West Side to be closer to their grown children, he returns every year to PJTC to honor his father’s memory by reading from the Persian Torah scroll.

Today, the Persian Torah holds a place of honor at PJTC, where, in addition to being used for Samuel Nehdar’s memorial anniversary, it is one of the scrolls brought out at the High Holidays and other special occasions. Reading from it or being called for an aliyah is like opening a door into another world. At once unusual and familiar, it reminds us not only how far it’s traveled but how far we have as well.

Deborah Noble is a freelance contributor to JLife-SGPV and a member of PJTC.