Jlife SGPV Logo
Facebook
Home April 2020 This Too Shall Pass 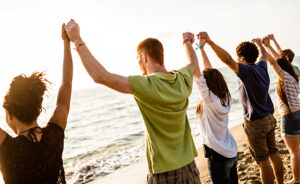 I am continually amazed at the interconnectedness of our world. This feeling of interconnectedness has really only existed, in my mind, for the last 20-25 years. Before that time, we were not as intimately aware of what was transpiring on the other side of our planet, nor do I think many people truly cared. While there may have been an interesting or phenomenal thing that was covered on the evening news, or on a news show like 20/20 or Dateline, rarely were we concerned or paid as close attention as we are right now.

Why did we not care as much as we do today? Is it because we did not believe it had any impact on our everyday lives? Probably. Did we think that it was happening to someone else so why should we care? Definitely. And yet, according to our tradition, we should have cared.

When questioned by G-d after killing Abel, Cain said “Am I my brother’s keeper?” And while this was stated as a rhetorical question, the answer is 100% yes. In Pirkei Avot, Rabbi Hillel states, “do not separate yourself from the community.” This idea is that we are responsible for one another and as such as… interconnected.

With increased ability to travel and connect with people, we can now truly see the interconnectedness of the world. The fact that an illness that started in China, traveled throughout the rest of the world is an example of this. While right now we might consider this a significant negative, it illustrates that things that happen halfway around the world could also have a positive impact on our lives. Case in point… Marie Kondo.

The KonMari method of organizing came out of Japan where Kondo lives. She single-handedly revolutionized how people organize not only their stuff but their lives. This is but one example of how we are positively impacted by ideas and innovations that came from other places in the world.

Now, on a different note, I am reminded of a Jewish folktale about King Solomon and the phrase “this too shall pass.”
“King Solomon once searched for a cure against depression. He assembled his wise men together. They meditated for a long time and gave him the following advice: Make yourself a ring and have thereon engraved the words ‘This too will pass.’ The King carried out the advice. He had the ring made and wore it constantly. Every time he felt sad and depressed, he looked at the ring, whereon his mood would change and he would feel cheerful.”

When our social distancing comes to an end, and we are able to get back to some sense of normalcy, think about how much more we are going to appreciate the simple things… spending time with friends, giving someone a handshake or a hug, hand sanitizer and toilet paper. Seriously! We have taken all of these things for granted because we have never been forced to be without them in our lives. Or in the case of toilet paper, we never realized how much we valued it…especially when we had such a difficult time getting our hands on it.
Hopefully this appreciation for the things we have to go without will stay with us for a long time. More importantly the appreciation of coming physically together as a community. Almost everything that was postponed or canceled, like the Jewish Federation’s Annual Women’s Forum, and the Jewish Food Festival will happen once again. And I want you to think about how meaningful those events will be for all of us to come together again.

This too shall pass and maybe we will all feel a bit closer to those who are part of our global community.

Jason Moss is Executive Director of the Jewish Federation of the Greater San Gabriel and Pomona Valleys.