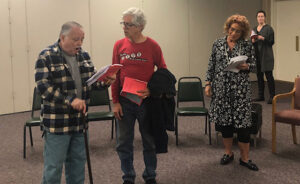 On Monday, April 29, in honor of Yom HaShoah, Holocaust Remembrance Day, which this year is May 2, the Jewish Federation’s JFed Players will present a staged reading of “The Wall.” This compelling play adaptation of John Hersey’s novel is about events prior to and during the Warsaw Ghetto uprising.
The 1960 Broadway show, written by Millard Lampell who was blacklisted during the McCarthy era, starred George C. Scott. Twenty-two years later it was made into a television movie featuring Tom Conti, Eli Wallach and Rachel Roberts.
This will be the third time that the JFed Players, known for their comedies and musicals as well as several dramas such as Twelve Angry Jurors and Twilight Zone, will perform a dramatic reading. You may recall last year’s moving performance of Judgment at Nuremberg preceded by The Righteous the year before. This year’s event, like last year’s, takes place in the main theater of this historical arts venue.
The play centers on several main characters including a baker, a peddler and a married ladies’ man. Action also revolves around three families: the Rabbi and his son and daughter, a successful businessman’s family with two daughters and two sons, and a husband and wife with a daughter. It also includes a variety of other Jewish Warsaw residents. Over the course of the reading, the audience learns about the deterioration of life, how the residents are packed into smaller and smaller places while trying to maintain their lives. They’ll hear how conditions grow more and more dire, ultimately leading to the rise of a resistance group.
In the meantime, the Germans are cracking down on the inhabitants, implementing more and more restrictions amidst daily extrications to the concentration camps—which the characters are led to believe are only labor camps. The Germans use brainwashing ploys to get Jews to leave for the camps. In 1942 they promise food and countless Jews depart because they are starving and take the Germans at their word. A sense of fear is pervasive amongst the remaining Jewish residents of Warsaw despite upbeat postcards received from former inhabitants who chose to voluntarily go to “the camps.” Speculation is rife on the part of the Warsaw Ghetto inhabitants about what is actually happening as characters witness more and more people leaving never to return.
The Warsaw residents, although not completely in denial, try to carry on their lives as normally as possible under dreadful circumstances. Romantic relationships develop. People get married and have babies. And, though schools are banned, the teaching of children continues. Hard as the Germans try to “defame, demonize and dehumanize” the Jews, they persist and find a way to make the best of things.
The Wall is broken up into three acts. Act I is spring 1940 and then six months later. The wall is built at the end of Act I. Act II also begins in the spring, and this time it’s 1941. Later in the second act it is the summer of 1942. Act III is the spring of 1943 when the rebellion occurs.
This powerful stage reading is a fitting reminder of the importance of memory, about never forgetting the six millions Jews who died in the Shoah. Our commitment to educate future generations about combating hateful ideologies that grow from ignorance is as relevant today as it was in 1940.
For more information about the Monday, April 29 Yom Hashoah staged reading and for ticket pricing and show time, please visit www.jewishsgpv.org or call (626) 445-0810.

Don’t miss this great opportunity to see the Yom Hashoah staged reading of
“The Wall.”

RONNA MANDEL IS A CONTRIBUTING WRITER TO JLIFE MAGAZINE.