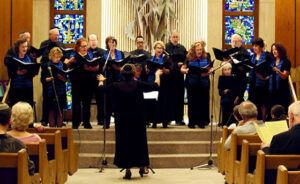 IN JULY 2008, Diane Schuster and Rita Warshaw, long-time members of the choir at Temple Beth Israel of Pomona, attended the North American Jewish Choral Festival, an annual event for singers held at a resort in the Catskills. The Festival brings together singers and choirs from across North America with a renowned teaching staff, conductors, composers and other music professionals to sing, learn and share the joy of Jewish music. At the 2008 gathering, Diane and Rita especially enjoyed listening to “new choirs” from a range of communities that had been invited to perform.  They realized that there were singers “back home” who might be interested in forming a regional group dedicated to learning and performing the kind of Jewish music they had been privileged to hear.

Around the same time, the Jewish Federation was planning its first Festival of Jewish Music—a Chanukah concert that brought together the choirs from synagogues in Pasadena, Pomona, Whittier, Temple City, West Covina and Glendale.  The excitement generated by this community event led Diane and Rita to approach Cantor Judy Sofer, then at the Pasadena Jewish Temple and Center, to find out if she would be interested in conducting a new community chorale. Judy’s enthusiastic response, along with an expression of interest from the Board of Governors of the Jewish Federation of the Greater San Gabriel and Pomona Valleys, resulted in the formation of Kol HaEmek—Voice of the Valley.

Officially adopted as an auxiliary program by the Jewish Federation in 2009, Kol HaEmek’s (KHE) goals were expressed in its mission statement:

Kol HaEmek (Voice of the Valley) is a cross-denominational Jewish community chorale comprised of singers from throughout the Pomona and San Gabriel Valleys- region of Southern California.  We sing a diverse and sophisticated repertoire of traditional and contemporary Jewish music that is exciting and fresh to singers and listeners alike. Our goals are to build community through Jewish music, provide joyful celebration of our heritage and introduce new ways of understanding a variety of Jewish musical traditions.

From the first “call for singers” in 2009—when 35 people from throughout the region showed up to learn about this new musical initiative—Kol HaEmek has met for weekly choral rehearsals, participated in the Jewish Federation’s annual Chanukah events, performed liturgical music at Shabbat services at area congregations and responded to invitations to sing at diverse venues including the University of La Verne, the American Jewish University, City of Hope, Mount Sinai Memorial Park, cantors’ concerts and the Los Angeles Jewish Choral Festival.

KHE members come from throughout the region—from La Cañada to Rancho Cucamonga. Half have been with the choir since its inception.  The group is evenly divided male and female. Many singers are synagogue members, but the group welcomes both the affiliated and unaffiliated.  While the ability to read music is not a requirement for membership, interested newcomers are expected to demonstrate through an audition that they are able to blend well with KHE’s rich and harmonious sound.

The highlight event of the KHE year is the annual Shir Delights concert, in which the chorale presents songs from its large repertoire of Jewish music:  classical and modern liturgical pieces, Israeli songs, Broadway melodies, camp tunes, jazz and blues numbers, Sephardic and Ladino songs and new works by contemporary composers. This year’s concert was held on June 4, and included some little-heard Israeli pioneer songs, an uplifting musical setting of  “i thank You God” by poet e. e. cummings, the premiere of a new composition by KHE member John Carlton and Shlomo Carlebach’s rousing Mizmor l’David (a KHE audience favorite).

Although several KHE members have attended the North American Jewish Choral Festival over the years and have been inspired by the joyful “music making” that occurs during that annual celebration of Jewish song, it was only in Fall 2016 that KHE felt it was ready to apply to perform as a “new choir.” After weeks of practice, the group prepared an audition tape that they believed would show off the musical sound they had achieved over the years. They submitted a DVD and then waited…and waited…mindful that there were several aspects they hoped would present themselves.

1) For Diane Schuster and Rita Warshaw, an invitation to perform at the NAJCF would be a true “coming home” nine years after their initial longing for a Jewish chorale in their community.

2) For Cantor Judy Sofer the chance to lead the group before a huge audience of singers and Jewish music lovers would be a moment of intense accomplishment and pride.

3) For KHE members who were willing to embark on a fundraising campaign to cover the group’s expenses for transportation to New York and the Festival registration, the opportunity to achieve a long-held goal would affirm their dedicated effort.

3) And finally, for the Jewish community of the Greater San Gabriel and Pomona Valleys, the appearance of KHE at a celebrated national Jewish music event would be a kvell of the highest order.

On January 20, 2017, the long-hoped-for email arrived from the NAJCF’s administrator, Dr. Marcia Bryan Edelman: “Congratulations!  Your choir has been invited to perform at this year’s North American Jewish Choral Festival, July 16-20, 2017.”

Tanya Schwied graduated from New York University, studied abroad in Israel, and is a contributing writer to Jlife magazine.