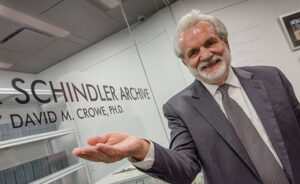 David M. Crowe is a Presidential Fellow at Chapman University and Professor Emeritus of History at Elon University. He is a specialist in international criminal law, the Holocaust, the history of the Romani people in Eastern Europe and Russia, and 20th-century China. Jlife caught up with Dr. Crowe to talk about his life’s work.

Early in your career you worked as a Russian specialist at the National Archives of the United States. The Soviet Union seeked the return of certain records. What was the significance of these documents? In the era of detente, in the mid-’70s, my role was to work with Russian delegations that were coming over to look at the files. These were seized during World War I, by the U.S., after the Bolsheviks took power. Up until October 1917, when the Czar was overthrown, the U.S. and the Russians were allies. We loaned the Russians a great deal of money, as did the British and the French, to arm the Russian military. Of course when the Bolsheviks came to power, they reneged on all these debts. So this was a key period in Russian history. You’ve got one of the most important episodes in 20th-century history: the Russian Revolution. One of the sad outcomes of World War I, is it created this whole movement of global Bolshevism and Communism. It then plays itself out after World War II in China and Southeast Asia, and in Eastern Europe. So this is sort of the nucleus of that particular period.

They wanted them back, that was the key thing. Of course, the problem as I saw it from a distance was this: If we gave these files back, we weren’t going to have access to them because the Russians’ archives were essentially closed. This was still the height of the Soviet era. What was interesting was once I left the archives in 1977 and went to Elon University, I was approached by prominent people in the Slavic field who said, “we don’t mind them having copies but the originals should not be given back.” Mainly because for scholars, they wouldn’t be accessible. They would disappear. They were never returned [to Russia] for that reason.

When you accepted a teaching position at Elon University, was this your first foray into Holocaust scholarship, or even Jewish history more widely? No, actually, I was raised in Miami, and one of our closest neighbors was a Holocaust survivor. Of course, this was the time, even after the Eichmann trial, when survivors still didn’t talk about it, but she took me under her wing. In terms of Holocaust studies, this was very early, even before Yad Vashem started their “Righteous Gentiles” program, so I really got in at the ground floor. I was raised in sort of a mixed Jewish-Catholic environment in Miami. I had attended Synagogue sometimes with friends, so I’d already had a comfort zone with Jewish History and Jewish Studies. By the time I got to Elon [University], the Jewish topic was very fertile for me. I started teaching courses on the Holocaust when I got to Elon but there were no resources. What transformed that, of course, for me and I think for the world, was the opening of the museum in Washington [D.C.] in ‘93. Yad Vashem is just so far away, even though it is the premier Holocaust memorial institution and organization, that there’s a limit to access.

You’ve taught at universities in Budapest, Heidelberg, Geneva, and Bucharest. What was it like teaching the Holocaust in a part of the world that was on the frontline of the war? Could you still detect any lingering guilt or shame about complicity in the Holocaust? There’s more of a generational gap. For older people, there’s still a lot of residual anti-Semitism there, all over Eastern Europe. I was lecturing in Romania last summer and they have a very dynamic school. I speak about the Roma during the Holocaust, and that’s sort of a new field over there, because there’s so many Roma. There’s a much younger generation who are very receptive to this, because they’re generations removed from the war. So they don’t take it personally. And this is not true for the older generation, they’re defensive and a lot of them won’t even talk about it. But among the college students I worked with, they’re willing to look honestly and openly at what happened. A chapter of a book I’m writing now deals specifically with German theft of Jewish property. It ends with the fact that Poland is the only country in Eastern Europe that has refused to pass reparations and restitution laws. Their fear is that they’ll have this flood of claims. That’s extremely expensive, and if you talk to many survivors, they don’t want their property back anyway, particularly in Poland.

You’ve studied and published extensively on the history of the Romani peoples of Europe. Does the U.S. National Holocaust Museum adequately pay tribute to both Jewish and Roma losses in the Shoah? When I was on the educational committee at the [U.S. National Holocaust] museum there was an ideological battle being waged between the Jewish survivors and the handful of Roma representatives. There was certainly room for a conversation about Roma losses. But some of my colleagues, who were Roma themselves, began to come up with these fantastic figures of Roma deaths. The problem, I kept saying was, “you can’t fabricate figures.” In my own work, I estimated that at least 100,000 Roma died in the Shoah, and the reason was that most of the Roma lived, during World War II, in countries like Romania and Bulgaria. These were Nazi-allied states but they were not occupied by the Germans. People need to understand that because they were so few in number—there were maybe 50,000 in Germany and Austria—they were really not viewed as the same type of socio-economic threat as the Jews.

How were the Roma viewed by the Nazis? The Roma like the Jews, were deemed “unfit to live” by the Nazis. They used to say the Jews were hated because they were well-to-do and prosperous, and the Roma were hated because they were poor and lowly. The Roma violated one of the core German ethics against itinerancy. This centuries-old prejudice exists today. You still have these really horrible stereotypes, almost worse than the Jewish stereotypes because they don’t come with a flipside of grudging admiration.

Was the decision to hold the event commemorating Kristallnacht at Chapman’s Fish Interfaith Center intentional? Is there a universal message that the event is meant to impart, rather than a memorialization of a uniquely Jewish tragedy? My perspective is this: The room [to house the archives] is

part of the Sala and Aron Samueli Holocaust

Memorial Library which underscores the collection’s Jewish connection, but the event [was] held in the Interfaith Center in order to share the eternal and universal lessons of the Shoah. And that’s why we do this. If we only shared knowledge about the Shoah from the perspective of a uniquely Jewish horror, then what do we learn from it?

You are credited with writing the definitive biography of Oskar Schindler. How does your book differ from the dramatized account by Spielberg? I think [Schindler’s list] is wonderful. If it hadn’t been for Spielberg, I never would’ve written the book. After I wrote it, my editor said to me, “You know, there are parts of the book that contradict the film. It’s ok…you know, we like controversy. It sells books.” And I said, “I don’t like controversy and I’m not going to attack Steven Spielberg, because I admire him too much.” This was a different genre, his was a film. It was a different dynamic, and I can easily understand why he did what he did. The body of facts he was working with in the ‘80s was much less complete than what I had access to in the ‘90s and early 2000s. By then these countries were no longer Communist. But in terms of the film, the speech that Schindler delivers to the factory workers at the end is totally different. He was very self-assured about reminding the Jews that he wanted them to know what he’d done for them. The woeful, crying scene where he laments, “Why couldn’t I do more?,” that didn’t happen.

As an authority on one of the darkest chapters of human history, have there been any recent political developments that alarm or give you pause? I think, certainly, what frightens me is what came out at certain points in this [Presidential]campaign. When someone makes public statements that are mysoginistic, or prejudicial to minorities, and that person isn’t held accountable—and in fact, in many ways, it seems to be these very statements that are ensuring that person’s success—I find that very frightening. It has a tendency to legitimize those prejudices. I’m also idealistic enough to still think we live in the greatest country in the whole world. I also know way too many people—scholars, friends, and acquaintances—who don’t accept these sorts of things. So I think we’re going through a frightening period in American history, but I’m heartened by other things I’ve seen, and I think it behooves us to speak out against injustice. Prejudiced statements cannot be accepted as the norm, and we have an obligation to voice opposition to these sentiments. If their voice grows louder and ours weaker, then we’ve lost that battle and we can’t do that.

Thank you so much for your time. No problem, thank you.

Perry Fein is a writer and contributing editor for Jlife.

Coinciding with this event, Chapman University’s Holocaust Education Program received a transformative gift: The world’s most complete collection of papers and archival materials on Holocaust-rescuers Oskar and Emilie Schindler.

Author and Scholar David M. Crowe, Ph.D., donated his collection, assembled during many years of research on his definitive biography of Schindler.

Once Catalogued, the Oskar Schindler Archive will be open to researchers and students.

Two States are Not a Solution