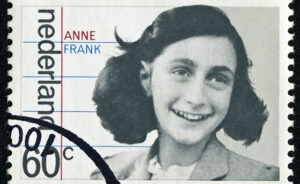 The Jewish Federation of the Greater San Gabriel and Pomona Valleys and the Pasadena Playhouse continue their collaboration and partnership in commemoration of Yom HaShoah with the National Jewish Theater Foundation Holocaust Theater International Initiative—Remembrance Readings by staging this year’s reading on Monday, April 20 at 8:00pm. Under the direction of Cantor Judy Sofer, the Jewish Federation’s JFed Players will be presenting The Diary of Anne Frank, a play written by Frances Goodrich and Albert Hackett. This play is based upon the diaries of young Anne Frank chronicling her experience hiding with her family during the Nazi occupation of the Netherlands during World War II. Her diary was found and kept by Miep Gies, one of the people helping the Frank family and four other Jews to hide, and given to her father, Otto Frank, after the war. He was the only member of the family to survive. First published in Amsterdam in 1947, the diary has subsequently been published in more than 70 languages.
The family’s journey into hiding began on July 6, 1942, a day after Anne’s older sister, Margot, received a summons to report to a Nazi work camp in Germany. On that day, Otto Frank, his wife, Edith, children Anne and Margot, and the van Pels family—Otto’s business partner, Hermann, his wife, Auguste, and their teenage son, Peter—went into hiding in a sealed annex of upper rooms in Otto Frank’s company building. Soon after, they were joined by the van Pel’s dentist, Fritz Pfeffer. The families were assisted by Miep Gies and Bep Voskuijl, both employees of Frank’s company, who brought food and other supplies to those in hiding, until August 1, 1944, when the families were discovered.
Anne received a blank diary for her thirteenth birthday, June 12, 1942. She began writing in it two days later. The original diaries that spanned the two years in hiding were written in three volumes. Generally, as families were discovered, any written information was confiscated by the Nazis and destroyed. Anne had rewritten a version of her diaries for posterity, as a manuscript on loose papers, which were found strewn across the floor in the annex. The papers were found by Geis and Voskuijl after the family’s arrest, but before the Nazis ransacked their rooms. Geis hid the papers until the end of the war, planning to give them back to Anne after the war. Tragically, Anne did not survive, so the papers were given to her father.
Far from being solely focused on living in constant fear, The Diary of Anne Frank is the story of an unusual girl thrust into an unusual environment, experiencing the emotions of a girl maturing into adulthood. As Michael Berenbaum, former director of the United States Holocaust Memorial Museum wrote, “Precocious in style and insight, it traces her emotional growth amid adversity.” We read about Anne and her blossoming feelings about Peter, the young man who, along with his parents, shared the annex with the Frank family and the dentist. This, juxtaposed with her feelings of fear, watching Nazi soldiers march in the street below the annex. Moreover, perhaps ironically, this is a story of hope. One of the most poignant quotes from the diary is “In spite of everything, I still believe that people are really good at heart.” This is evidenced by Miep Gies and Bep Voskuijl, who risked their lives hiding the Franks, van Pels, and Fritz Pfeffer, the van Pels’ dentist and bringing them supplies.
The Diary of Anne Frank is an inspiration to us all. It is a testament to courage, tenacity, and hope. As an example, earlier this year, Princess Kate (nee: Kate Middleton), began a project to commemorate the 75th anniversary of the liberation of the Auschwitz-Birkenau concentration camp. For her project, Princess Kate took photographs of two Holocaust survivors and their grandchildren, allowing the survivors to share their stories, making sure that their horrific ordeal is not forgotten. Her inspiration for this? As she said in a statement regarding this project, “One of the most moving accounts (of the Holocaust) I read as a young girl was The Diary of Anne Frank, her sensitive and intimate interpretation of the horrors of the time was one of the underlying inspirations behind the images . . .”
Plan to be at the Pasadena Playhouse on Monday, April 20, 2020 at 8:00 p.m. for the staged reading of The Diary of Anne Frank. No matter how many times you have heard the story, seen the movie or a stage adaptation of this literary work, there is still something important to be gleaned from the words penned by a teenage girl, hiding in an upstairs annex, during one of the most horrific chapters in history.