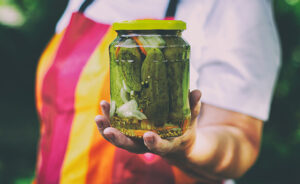 Dr. Elliot Weinstein has a love affair with pickles. Ever since he discovered an old family recipe for making them, Weinstein’s become something of a pickling evangelist. This spring, he’ll be bringing his expertise to the new Jewish Food Festival and teaching a pickle-making workshop, and he couldn’t be more excited about the prospect.

Weinstein’s love for pickles ironically began because of software. Weinstein once owned a software company that specialized, among other things, in fonts. He got the idea to make a cookbook using some of the fonts, and started looking for recipes. “I collected all the family recipes, and included in that was a family recipe for pickles,” said Weinstein. He printed a bunch of copies of the book, and the pickle recipe has lived on ever since.

“Pickle making, for me, was initially just making pickles for my family,” said Weinstein. “Out in the Inland Empire – you tell me where there’s some good old-fashioned Jewish delis. You tell me. There’s not any around here anymore.” So Weinstein felt that instead of driving to LA to get his pickle fix, he’d brine them himself.

Word of Weinstein’s pickling prowess soon got around town, and he was asked to lead a pickle making workshop at Temple Shalom in Ontario, where he’s been a longtime congregant and lay leader. To Weinstein’s surprise, nearly 30 people showed up for the event. “Everybody was so excited about it,” said Weinstein. After that, he started doing workshops more frequently.

Weinstein sees the popularity of pickles, at least among Jews, as inextricably linked to culture. “As delis became important in Jewish cuisine in America, this is something that people would purchase from the deli. The deli would make it in big, big vats usually.” Pickles became part of the fabric of American Judaism.

Pickles go back quite a long time though. “Even as far back as 4,000 years ago they were making some form of pickled vegetables,” Weinstein explained. “It’s essentially an old form of preserving the vegetables.”

“These bacteria will then make an acidic environment, and that environment gets to the point where the acid and the salt make sure no other bacteria’s going to grow in it, which is how it gets preserved.” That acidity is also what gives the pickle its sour taste.

Weinstein is excited to show off the process of pickle making and talk about its history at the Food Festival. Pickles, he says, are universal. “Essentially pickles go throughout all different cultures,” said Weinstein. From German sauerkraut to Korean kimchi, pickling techniques pop up in societies around the globe, and Weinstein is happy to share his own experience with the community at large. “I think having a positive cultural experience for the people is a great idea.”

People will have a chance to purchase and taste Weinstein’s pickles after the workshop, and Weinstein hopes some of them will take up the art of pickle making themselves. “It’s like making your own bread… you could have gone to the store and bought bread… but you make your own bread and it makes you feel good.” Pickles just make the world a better, happier place.

What’s in a name?