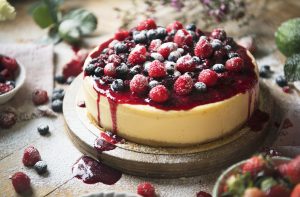 You may have heard Shavuot referred to as the cheesecake holiday, but how did the tradition of eating dairy for Shavuot begin?

“The use of dairy to celebrate Shavuot is not mentioned in the Talmud,” said rabbi and food historian Gil Marks, the author of the “Encyclopedia of Jewish Food” (Wiley, $40). “Shavuot coincides with the weaning of the animals, so you have a surplus of milk at that time and therefore cheese, yogurt and dairy products. Once you have a tradition, you will find biblical reasons for it.”

Almost 6,000 years ago herdsmen discovered that when milk separated, it coagulated into curds – the first fresh cheese – which not only tasted good, but lasted longer than milk. (Cheesecake would come much later!)

“Remember, until pasteurization, it was dangerous to drink milk straight,” Marks noted, “so people ate fermented forms like yogurt, cheese and butter, which have a longer shelf period.”

More importantly, Shavuot, which begins at sunset on Sunday, May 16, commemorates the giving of the Torah at Mr. Sinai. “One of the new laws concerned keeping kosher, and since their utensils and any meat products they had produced before were no longer kosher, for the first Shavuot they ate dairy products,” Marks explained.

For an international take on the holiday, why not try this paneer and peas curry by Chef Rachana Rimal of Nepal from “The Kitchen Without Borders: Recipes and Stories from Refugee and Immigrant Chefs” (Workman, $24.95) by Eat Offbeat, a New York catering company that hires immigrants and refugees, bringing authentic tastes from war-torn and distressed areas of the world. “Our company was born out of the desire to give life to the special food memories our chefs brought with them,” write founders Manal and Wissam Kahi of Lebanon. Their purpose was two-fold: to provide safe and steady employment to refugees, and to introduce New York, the food capital of the country if not the world, to cuisines that may be less familiar: Napali, Iraqi, Syrian, Sri Lankan and Eritrean, to name a few.

Chef Rachana was the first Offbeat chef. She left Nepal, with its unstable government, and emigrated to New York in 2006, bringing her expertise and love of Nepali and Indian cuisine with her. The star of her vegetarian curry is paneer cheese, which is made by curdling heated milk with acids like lemon juice, vinegar, etc. It has less fat and fewer calories than regular cheese.

Cheesecakes are actually a form of custard, combining eggs, cheese, sugar and a host of extras over some sort of crust. According to Marks, the ancient Greeks made the first cheesecakes by pounding cheese with flour and honey and cooking the mixture on an earthenware griddle.

Some claim this recipe came from Lindy’s, the iconic New York restaurant and Broadway hangout – the original location operated from 1921 to 1957 –which was immortalized as Mindy’s in “Guys and Dolls.” Is it really their recipe? Who knows and who cares? I’ve even won two cooking contests with it. (Well, in truth, one was at my friend Joanne’s house party where I gleefully beat out her husband, Gerry, and the other was an office party, but still….) I have greatly simplified the traditional crust preparation – there’s really no need to roll it out, the only daunting process in the original recipe. I usually whip the leftover heavy cream with a tablespoon of sugar and pipe it around the cake for even more dazzle. (Note: If you want to avoid cracks, “at room temperature” means at room temperature!)

Yield: 4 to 6 servings as a main dish

You can purchase paneer cheese fresh or frozen at any of Orange County’s international markets, specialty grocers or online, where you’ll also find the other ethnic ingredients.

Note: If using frozen store-bought paneer, soak it in hot water for 2 minutes to defrost. Pat dry before using.

Butter, for greasing the pan