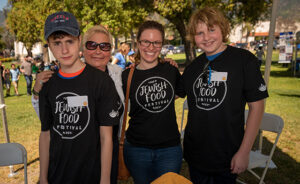 Three words, Jewish, food, and festival may be fine on their own. But when combined into Jewish Food Festival you have an event that evokes thoughts, tastes and smells from your childhood, the High Holy Days, or your last visit to Langer’s. The goal of this past April’s Jewish Food Festival—organized by the Jewish Federation of the Greater San Gabriel and Pomona Valleys—was to do just that and more. This celebration of Judaism through food saw over 2500 people attending. In fact, it proved so successful and delicious that it will be back again in 2020, rather than 2021 due to popular demand. So mark your calendars now for Sunday, April 26, 2020. Just thinking about it makes my mouth water.

We know the international influence of Jewish food is profound so what better way to expose people to different types of foods than at a festival? While the entry is free, guests can purchase tickets to try the assortment of Jewish cuisine that ranges in price from $3 to $10. Some of the food offerings last year included something for everyone, from a slice of homemade gefilte fish to kugel to a bowl of matzoh ball soup to cholent. It’s also nice to be able to buy just a small portion to sample something you’ve been reluctant to eat. For me, that would be stuffed dolmas. And the best part, a portion of the proceeds goes to support the Jewish Federation so they can continue to organize wonderful community opportunities just like this.

Last year’s event featured 17 food booths and nine artisan booths. Expect many more in 2020, after last year’s response. This year’s event will still have a dairy side, a meat side, and expanded Kosher options. The layout of the festival’s Kids Zone has been redesigned to incorporate it more into the event’s location whereas last year it had been separated. Back again are the wide array of community partners and organizations making for a well-rounded festival where there’ll be no food duplication. Local restaurants will also be on hand to supplement the festival fare.

What was the reaction to the first Jewish Food Festival you may wonder? One volunteer commented, “Well, kudos on a VERY successful event! I think the crowds surprised all of us. WOW!” Another said, “who would have thought that a food fair in Monrovia could be so successful??!! Congrats. I don’t know how it was put together, who were your principal helpers, but they were amazing. As a Jew, I was proud that it was done well.” Speaking of volunteers, the Jewish Federation needs you! They’re looking for volunteers to help leading up to the festival and on the day of the festival. The more the merrier so please call 626.445.0810 if you’d like to get involved.

In addition to the delightful dining experience, the Jewish Food Festival will feature food demonstrations, and a beer and wine garden. Mission Wines of Pasadena and Hangar 24 Craft Brewing out of Redlands donated last year’s alcoholic beverages, something we can look forward to again in 2020. The Jewish camps will have a presence so parents can get a jump start on planning for summer activities. Everyone can attend with confidence. Not only will there be a First Aid Station, the Jewish Federation is once again working with the Monrovia Police to ensure a safe festival.

There’s no doubt that Jewish food is something our community can get excited about. Guests can expect this year’s festival to build upon last year’s huge success. “I want people to be proud of being Jewish,” says Jewish Federation of the Greater San Gabriel and Pomona Valleys’ Executive Director, Jason Moss.
The second annual Jewish Food Festival at Monrovia Library Park will run from 11am until 3pm giving attendees plenty of time to sample the offerings, schmooze, and visit the artisan booths, too. Food tickets can be purchased in advance or on the day of the event.

Ronna Mandel is a contributing writer to Kiddish Magazine. She can be reached at goodreadswithronna.com.

November 2, 2022
Using Intention to Make Art More Meaningful My 9-month-old son is way too young for real arts and crafts projects. He’s still at the point...

Sarah Sassoon and Her World of Cardamom Tea and Date Cookies