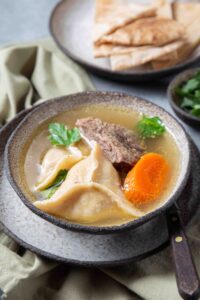 When it comes to Jewish holidays, we either feast or fast. The last few weeks have brought us a trifecta of feasting opportunities: Rosh Hashanah, Break the Fast of Yom Kippur and most recently Sukkot, a week-long harvest festival celebrated this year from sundown Oct. 9 to sundown Oct. 16.
Before we built our room addition, our kitchen opened onto a screened-in patio, and our family tradition each year was to turn it into a “sukkah” of sorts and host family and friends potluck style. My husband would string wire across the patio roof and insert palm fronds through the wire; then we would hang seasonal fruits and vegetables.
Because the Sukkot table is farther away from the kitchen, traditional dishes for this holiday are easily transportable one-dish stews and casseroles. Stuffed vegetables are a popular choice, particularly in Israel, where every Sephardic and Oriental culture has a favorite recipe.
“Turkish cooks are masters of the stuffed vegetable,” noted Clifford A. Wright, author of “Mediterranean Vegetables” (Harvard Common Press $29.95) in a telephone interview, “but you find stuffed vegetables very popular with Arabs, too.”
Wright includes delicious recipes for stuffed artichokes, eggplant, grape leaves, mushrooms, onions, chard and yellow peppers. Subtitled “A Cook’s ABC of Vegetables and Their Preparation in Spain, France, Italy, Greece, Turkey, the Middle East, and North Africa, with More than 200 Authentic Recipes for the Home Cook,” my food-splattered edition of “Mediterranean Vegetables” has become an invaluable resource. From the esoteric acanthus-leaved thistle to the more common zucchini, Wright lists each plant’s characteristics and varieties, its botanical and etymological origin and instructions for growing, buying, storing and preparing them.
Most fascinating is the history of each vegetable through the ages. In Sicily, ingesting eggplant was once thought to lead to insanity, and it was called “mad apple.” The ancient Romans used cabbage to prevent a hangover, and the Egyptian Copts placed cucumber leaves mixed with salt on women’s breasts to promote milk production.
Interestingly, “Mediterranean Vegetables” does not mention Israeli cuisine. “I don’t believe there is such a thing,” Wright told me. “Its origins in the Mediterranean are mostly in the Arab world. Jews who came from Arab countries – Iraq, Tunisia, Libya, Syria and of course Spain, too – brought with them their cuisine. There really is little difference between Jewish cuisine and the local cuisine in which it finds itself.
“What makes it different is it is almost exclusively connected with holidays and the self-realization on the part of the Jewish community that these dishes are special to those holidays.
“And to those who think the Arab-Israeli conflict is hopeless, remember, Arabs and Jews lived together for thousands of years, and this conflict actually began historically only recently,” added Wright, who began his career in the field of international affairs and is a former executive director of the American Middle East Peace Research Institute.
“Look at the Spanish Jews who were expelled during the Inquisition. Although some went to Germany, the majority went to Muslim lands. Why in the world would they escape to Muslim lands if there were not welcoming hands to greet them?”
When it comes to stuffed foods, my family’s favorite are kreplach, those savory meat-filled dumplings that go together with chicken soup like meatballs and spaghetti, apples and Brown Betty, Sacco and Vanzetti…you get the idea. But few have the patience or skill to make them at home. Pity.
I remember as a young bride trying to make kreplach in our Parsippany, New Jersey, apartment. I don’t remember where I got the recipe, but the little dumplings exploded in the boiling water—and with them my confidence. That experience created a fear of all things rolled—a dough phobia, if you will—that spilled over to pie crusts and pastries of all sorts and lasted over 30 years.
“I’m just not a dough person,” I would lament, until testing recipes for my cookbook forced me to face my fears (and without a support group yet).
This is a wonderful dough—a very pliant, elastic, and forgiving little lump, as fun to knead as Silly Putty. If you can roll out sugar cookies, you can do this. The food processor cuts out all the work. And as for the filling, next time you make brisket, measure out some slices for kreplach and freeze them until the mood hits. I think kreplach-making parties should become pre-holiday family affairs, the way Christmas tamale-making parties are in the Mexican American community.

1. Cut off stem end of eggplant and save this as a “lid.” Hollow out eggplant by removing seeds and flesh, being careful not to puncture skin. Reserve eggplant pulp to make another dish such as eggplant fritters. Place hollowed-out eggplants in bowl or stew pot filled with salted water and let them leach their bitter juices for 30 minutes. Drain and pat dry inside and out with paper towels.

2. Heat ¼ cup of the olive oil in skillet over medium heat and cook onions with ½ teaspoon of the salt, stirring, until onions are translucent, about 8 minutes. Add drained rice and pine nuts and cook, stirring frequently, until  rice is well coated with oil, about 2 minutes. Add ¾ cup of the water, the chopped tomato, currants, pepper, allspice, mint, and dill. Stir, reduce heat to low, cover skillet, and cook until rice has absorbed liquid but is still a little hard, about 15 minutes. Sprinkle with sugar.

3. Stuff eggplants with rice, not too lightly, not too loosely. Replace “lid” of eggplant, and arrange stuffed eggplants in deep casserole, side by side. Divide remaining 1 cup water, ½ cup olive oil, and ½ teaspoon salt among the 3 stuffed eggplants, cover, and cook until eggplants are soft but still maintain their shape, about 1¼ hours. Let eggplants cool in casserole. Serve sliced at room temperature.

Source: “A Mediterranean Feast” by Clifford A. Wright

1/8 teaspoon black pepper, or to taste

Outside of the Box

November 2, 2022
Using Intention to Make Art More Meaningful My 9-month-old son is way too young for real arts and crafts projects. He’s still at the point...

Sarah Sassoon and Her World of Cardamom Tea and Date Cookies