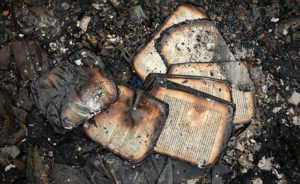 WHEN WE THINK  of all we lost during the Holocaust, six million of our people, and along with that their art and talents – it comes as no surprise that the Nazis also attempted to rob us of our books. Rabbi Mark Glickman has followed up his remarkable book about the Cairo Geniza with this epic story about the largest collection of Jewish books in the world—tens of millions of books that the Nazis looted from European Jewish families and institutions. In his book  “Stolen Words: Nazi Plunder of Jewish Books”, Glickman recounts how Nazi soldiers and civilians emptied Jewish communal libraries, confiscated volumes from government collections, and stole from Jewish individuals, schools, and synagogues. Early in their regime the Nazis burned some books in spectacular bonfires, but they saved most of them, stashing this literary loot in castles, abandoned mine shafts, and warehouses throughout Europe. It was the largest and most extensive book-looting campaign in history.

Glickman was motivated to research and write this publication when he purchased a book from eBay – a volume of Jewish law called Hilkhot Alfasi, published in 1764. “Inside the front cover was a bookplate from an organization I’d never heard of, – ‘Jewish Cultural Reconstruction.’” said Glickman. “When I looked into it, I discovered that Jewish Cultural Reconstruction was a group of historians and other scholars that determined what to do with heirless Jewish books and cultural material that the Nazis had looted during the war.” The idea that there were looted books intrigued him. “I had thought that the Nazis burned their stolen Jewish books; I was surprised to learn that they’d actually saved most of that material,” added Glickman. He wanted to know more.

“I worked on the book for about three years,” said Glickman, “poring through research already done on this story, as well as archival material, Holocaust memoirs, and other accounts of the looting, discovery, and return of the plundered material.”

According to reviewer Philip K. Jason, “Perhaps the most interesting material in Stolen Words has to do with the role of U. S. military forces and of specially established institutions for the rescue, repatriation, and allotment of Jewish books as part of rebuilding Jewish community life after WWII.”  Rabbi Glickman details the heroic efforts of particular members of the military who oversaw projects that included books of such important figures as Judah Leon Magnes, Cecil Roth, and Hannah Arendt.

While there has been a great deal of work done on the looted art from the Holocaust, there has been relatively little has been written about the books. “It is a largely untold chapter in Holocaust history,” commented Glickman,” one that is important for us to understand if we are to get a full picture of Nazi atrocities. The murder of millions of people was far more heinous a crime than the plunder of their books, of course, but this is part of the overall story of the Holocaust.”

Glickman reminds the reader of a comment by the German poet and essayist Heinrich Heine: “Where men burn books, they will also burn people in the end.”

Books are among the few physical relics we have of the world that the Nazis destroyed. Understanding what happened to those books helps strengthen our connections with the victims of the Holocaust and their rich cultural world.
Florence L. Dann, a fifth year rabbinical student at the Academy for Jewish Religion in LA, has been a contributing writer to Jlife since 2004.