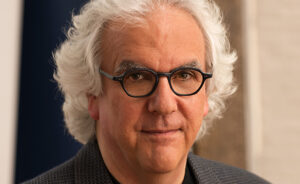 Stephen Fried has been writing about mental health issues for most of his adult life, so when he decided to tackle early American history, one man stood out in the crowd. Benjamin Rush was a signer of the Declaration of Independence, a doctor, intellectual, and the man many call the father of psychiatry in America. In Rush, Fried found himself the perfect subject for a new book, Rush: Revolution, Madness, and the Visionary Doctor Who Became a Founding Father. On Saturday, December 1, Fried will be appearing at the Jewish Book Festival to talk about the life of the doctor who changed America.

Fried was inspired to write about Rush because no one could explain his importance to him. “I’d always been told that he was the founding father of American mental health care,” said Fried, “though no one who told me that knew why.” Fried saw it as something of a challenge. “I was astonished that no one had written a book about Benjamin Rush that you would read on purpose.”

When Fried set out to delve into Rush’s story, he soon realized that he was delving into the history of his own city, Philadelphia. Rush had lived and worked in Philadelphia, and while many of his letters were kept in the city, Fried was forced to search far and wide for sources. “Many doctors love Rush’s history,” said Fried, “so many of them collected Rush things personally, and then would donate them to their favorite schools. So Duke has a big collection that a doctor collected… Indiana University has things.” The reason Rush’s documents had traveled so far had a lot to do with how he lived his life. “Rush trained the first 3,000 doctors in America, and those doctors went all over the country, and the people that they taught learned about Rush,” said Fried.

Fried searched all the nooks and crannies for Rush material, and soon found a fascinating man taking shape. “Not everybody who’s smart is a good writer. Rush was a very nimble writer. He kind of wrote in a very populist style,” said Fried. “Keep in mind the best known thing he was involved in was that he convinced Thomas Paine to write Common Sense, and edited Common Sense.” Rush was one of the youngest signers of the Declaration of Independence, and a confidant of everyone from Washington to Jefferson.

So how did such a deft writer, and a fascinating man come to be less well-known than some of his contemporaries? According to Fried, it wasn’t an accident. Rush’s family, friends, and colleagues actually worked to suppress much of his writings. Because Rush was a physician, some of his correspondence with the other founding Fathers included some extremely sensitive medical discussions. “Adams and Jefferson were afraid that people would see their most personal letters to Rush,” said Fried, who described how one letter from Jefferson included graphic details about his battle with diarrhea.

Rush also made the mistake of writing an anonymous letter to Patrick Henry criticizing George Washington during the Revolutionary War, and parroting the complaints of several generals about Washington’s leadership. Henry didn’t know who’d written the letter, but passed it on to Washington, who recognized Rush’s handwriting. “He was crushed that his friend Rush had bought into this,” said Fried of Washington, who never forgave Rush.

Rush’s letters show him to be something of a unique voice among his generation. Rush, who was raised Presbyterian in a city full of Quakers and Episcopalians, was more concerned than most about religious liberty. “Rush was actually a Christian who insisted on religious freedom in America,” said Fried. “Many of his patients were Jewish. He actually is known for writing some of the earliest descriptions in colonial America of a Jewish wedding and a Jewish bris.”

Rush had been discriminated against as a young man who wasn’t part of the dominant churches in Philadelphia, and so he understood what it meant to be different. It’s partly what made him such a good doctor, and one of the first American advocates for mental health care. When Rush came onto the scene, things were quite dire for the mentally ill in Philadelphia. They were chained in the basement of the hospital, where local townspeople could actually pay money to come and gawk at them. Rush instituted such novel changes as banning the public from the cells, and actually giving the mentally ill heat – something that hadn’t been done before his time.

Rush was one of the first to believe that mental illness was a medical problem. Rush believed madness was an illness, and not brought on “because people were not religious enough, and… because people weren’t trying enough. This was shocking to people,” said Fried.

Rush’s own son, John, was touched by mental illness and so the matter was personal for him. When John was in the Navy, he killed his friend in a duel. “In the months after,” according to Fried, “he had a complete psychotic breakdown – tried to kill himself many times. The doctors in New Orleans were embarrassed to report back to the great Doctor Rush that they couldn’t treat his son.” So Rush became a doctor to his own son.

More than anything, Rush believed in dignity and equality for all people, including the mentally ill. “The thing that runs through his writing about race… gender… religion… mental illness,” said Fried, “is that there should not be prejudice against people because of their color, because of their religion, because of their sex, because they have a different type of disease that you don’t understand as well.”

Rush’s core concern, which still resonates today, was “how do you balance science, religion, liberty, and good government?” Fried found Rush’s response to the problem impressive. “What I like about Rush is that he’s a doctor,” said Fried. “He’s a doctor who expects that in each generation these things are going to have to be treated.”

In the end, Fried hopes people see Rush as the multi-layered, and brilliant man he was. “I loved his complexity,” said Fried. “I mean, if anything, I think we sometimes read biographies where the writer is so intent on making the person superhuman that they want to ignore the things that are complicated. And I love the things about Rush that were complicated. One, because it’s true, and two because it’s actually a better story.”

Jonathan Maseng is a contributing writer to JLife magazine.