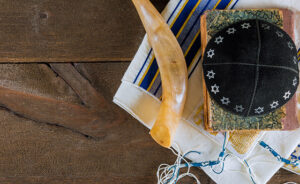 Last year at around this time, I was in Tel Aviv with my daughter Rebecca, 31, and some of her “baller” friends and the topic of fasting on Yom Kippur came up.

None of the women are religious but some fast on Yom Kippur and some do not. One friend, Michal Epstein, 39, said, “Why should I fast? I haven’t done anything wrong.”

I knew that Michal was kind of joking, since I do not believe that she thinks that everyone who fasts on Yom Kippur does so because they feel that they have done something wrong; however, she piqued my interest and I followed up recently by interviewing her on the topic.

Michal is a native Israeli, born to secular Jewish parents who made aliyah from New York in 1976. Michal was on Israel’s national basketball teams in high school and then as an adult. She played basketball professionally both before and after playing in a small New England college on an athletic scholarship, retiring from the game six years ago.

Michal owns two restaurants in Tel Aviv, and several years ago she became something of a celebrity by making it to the semi-finals of Israel’s “Master Chef” competition.

To begin with, Michal says that there is a big difference between the Israeli and the American Jewish experience. “In Israel, we do not deal with being Jewish. There is a difference between Israeliness and Jewishness. The first time that I was asked if I was Jewish was when I was 20 years old, in college in America. I didn’t even understand the question. I answered that I am an Israeli.”

Michal acknowledges that “if I were to live in America, as both my parents’ extended families do, I would speak more about being Jewish. In Israel, I never had to wrestle with my Jewish identity; it’s not part of the discussion here. I know that things are different in the States. A lot of Israelis who move there feel a need to connect to Jewishness because it reminds them of home. You feel like you are a stranger in the U.S. Suddenly, it’s important to hear Kiddush on Friday night.

“When I was in college in the States, I, too, felt this. Growing up in Israel, there was never Kiddush in our home, but on Friday nights in college I would go to secular Jewish friends’ [homes] who said Kiddush before dinner. Sometimes, I would even go with them to synagogue (something I never had done in Israel), and I enjoyed it—not in a religious sense but in terms of connecting.”

During the High Holidays when she was in college in the States, Michal says that she knew that her coaches would honor whatever she decided concerning religious observance, even if this meant not playing in an important game.

Michal says that she is a spiritual person but that “Spirituality does not have to be religious. I don’t have to believe in something specific. I believe in life and in karma, and in raising a family with good values. I am spiritual but it’s the Israeli spirit. It’s an energy that accompanies me, an instinct.

“To be Israeli in the best sense is to have a lot of warmth, a lot of good chutzpah, to be outgoing, to be together with the gang, to not be afraid to live your life to the fullest. It has to do with spirit and not religion.”