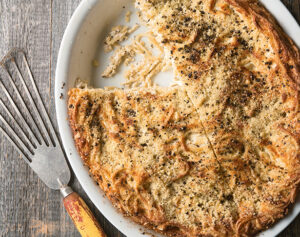 Leaving a prestigious career when you’re at the top of your game, with no real plan in mind, takes guts. “What does success mean if you don’t have the time or energy to enjoy it, if you work 100 hours in six days?” asks award-wining chef Missy Robbins in ”Breakfast, Lunch, Dinner…Life!” (Rizzoli, $35), the cookbook/memoir of her year-off and personal journey to find a healthful lifestyle and reconnect with her family, friends and her own self.

As executive chef at A Voce (both Manhattan locations), she was named one of America’s Best New Chefs in 2010 by Food & Wine magazine, her contemporary spin on multi-regional classical Italian cuisine earning both restaurants a Michelin star. But she knew she needed a break.

“At some point it became clear that it was time for me to reassess, so in May 2013 when I left A Voce, it wasn’t just the sense that I needed to leave my current job for a different one. It was that I didn’t even know if restaurants and cooking were the right answers anymore.”

Growing up, Robbins traveled with her family and dined out often. “Food was always a central part of my family, being so close to Manhattan, having all those opportunities,” she told me by phone.

Robbins grew up in a kosher home. “My mom makes a killer brisket and chicken soup and is an incredible entertainer. We had big Seders and Rosh Hashanah lunches after services. Her flowers were on the table that she did herself. The china was beautiful. She used her best linens. It was very polished.”

Overweight and unhappy, she knew she had to make some changes. “Olive oil, cheese, pasta, ice cream, pizza – these were my major food groups. I was always so busy or stressed or surrounded by enticing food that I brushed it aside for too long. I mean, delicious food was my job, right? There were lots of excuses and some mortifying experiences along the way, including one bottom-of-the-barrel moment when a fellow subway passenger presumed I was pregnant and offered to give me her seat. If I wanted to lose weight, I had to reexamine my diet and workaholic lifestyle.”

Robbins was well into her year off and still overweight when a friend told her he had lost 15 pounds in four weeks on Weight Watchers. She decided to try it. “Weight Watchers is all about portion control and choices,” she said. “Pasta with broccoli became broccoli with pasta. One slice of pizza is now accompanied by a salad instead of seven other slices. If someone had told me five years ago that I would measure my gelato and olive oil before eating it, I would’ve thought they were insane.”

From an early age Robbins had never eaten breakfast. “I had terrible eating habits and never ate until I got to work,” she recalled. “On my days off the last thing I wanted to do was cook. When I started my quest to be healthy during my time off, I learned that eating breakfast was kind of required if I wanted to successfully lose weight and balance my appetite so that I wasn’t gorging later in the day. Now it’s become so ingrained into my morning routine that if I don’t eat breakfast, I end up angry, hungry and prone to an afternoon binge.”

Working in her tiny apartment kitchen, she also developed a love of vegetables. “It was not until I changed my diet dramatically that I needed to make vegetables my best friend,” she writes. “I went from a pizza-, carb-laden, and meat-fueled world to cherishing every vegetable I could get my hands on. I challenged myself to make them taste as good as a bowl of pasta with butter and cheese. My stomach has felt better, my skin has improved, I never feel bloated, and I know I am doing something good for my body.

“As a chef who particularly enjoys carbonara, baked ziti and steak, portion control and food discipline were kind of foreign concepts. Not only is food my livelihood, it’s my passion, so my social life revolves around food too. When I had tried to diet in the past, it was mostly through plans to cut out carbs and sugar, kind of a ridiculous prospect, given that my calling is Italian food. As I’ve changed my diet and adapted to healthier eating, fish, along with vegetables, have become a centerpiece of my meals. Ironic that the few food groups I detested most as a child are what I can’t live without today.”

Robbins has used her creativity as a chef to find ways to enjoy her favorite foods, eaten mindfully, while adhering to her healthful eating plan. “The addition of cheese makes most vegetables better,” she suggests. “A little pecorino or Parmigiano-Reggiano goes a long way in adding the creamy, salty unctuousness that can make vegetables craveable.”

Her favorite Caesar salad had to get a makeover. “Unfortunately, it is loaded with cheese, egg yolks, and olive oil, ingredients that were not welcome on my newfound path to healthy eating. It was important for me to find an alternative to one of my go-to comfort foods, so I discovered that using yogurt instead of oil and eggs still allowed me to keep the garlicky, anchovy flavors of this wonderful dressing without ruining my diet.”

Make no mistake: this is not a diet cookbook. Portion control is key, she said. Known for her Italian cuisine, she created this savory kugel. “One of the best parts of taking time off from work was getting to attend holiday functions with family and friends,” she writes. “I came up with this dish for a Yom Kippur breakfast. It takes my Jewish heritage and love for Italian food and combines them in a traditional kugel with the flavors of cacio e pepe, a traditional Roman spaghetti dish. The result is a super simple dish packed with tons of pepper and the creaminess of pecorino, creating an indulgent comfort food from two cultures meeting in the middle.”
Cacio e Pepe Kugel

FOOD EDITOR JUDY BART KANCIGOR is the author of “Cooking Jewish” (Workman) and “The Perfect Passover Cookbook” (an e-book short from Workman), a columnist and feature writer for the Orange County Register and other publications and can be found on the web at www.cookingjewish.com.