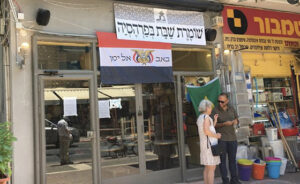 If Shabbat is Israel’s national weekly day for rest and relaxation, does it mean that all Israelis to some extent observe Shabbat? In thinking about this issue, I have reached the following surprising conclusion: The line between a recreational activity and a Shabbat activity that exists in America disappears in Israel.

In America, in order for a recreational activity on Saturday to become a Shabbat activity, one must first participate in activities that are specifically Jewish—such as lighting Shabbat candles, saying Kiddush, having a Shabbat meal and going to synagogue. For example, take a family that regularly goes to the movies on Saturday afternoons after a Shabbat morning synagogue service and Shabbat lunch. It could be argued that this family uses part of its Shabbat to relax at the movies. Without the Jewish framework, however, going to the movies on Saturday afternoon loses its Shabbat context and becomes a profane leisure activity. Consider, in this context, vegetarianism. Do all vegetarians keep kosher? Clearly not; while all of their food is indeed kosher, they themselves only “keep kosher” if they lead a Jewish life (with “keeping kosher” part of that life). Outside of Israel, only if one lives with a Jewish framework, do ordinary activities (i.e., activities that are not particularly Jewish) become part of that Jewish life.

In Israel, on the other hand, an atmosphere of Shabbat is provided by the state: All government offices are closed, all banks as well as schools are closed, there is no mail, there are special Shabbat programs on television and radio, etc. All leisure activities are thus subsumed into a context of Shabbat activities without the individual having to do anything specifically Jewish. Everyone in Israel, therefore, does have a Shabbat (whatever they choose to do on this day). Though I personally have my traditional ideas as to what constitutes an appropriate Shabbat activity, thousands of Israeli Jews have other ideas—and enough goes on (or fails to go on) in Israeli society on Saturdays to make it apparent to all that this leisure day is Shabbat.

Because Israel is a majority Jewish culture, I believe it is the only place in the world where it is possible to maintain a secular Jewish identity over the generations. One’s choice of Shabbat activity in Israel, for example, says nothing about one’s commitment to Jewishness (whereas the same cannot be said for Jews in the Diaspora). Having said that, many thoughtful secular Israelis do not want Israel’s Shabbat to become what America’s Sunday has become. The boundaries for what should and should not be permitted in the Jewish State on Shabbat are constantly being pushed and tested. A current case before Israel’s Supreme Court is a fascinating case in point.

Yehonatan Vadai, owner of the Bab al-Yemen restaurant in Jerusalem’s Rehavia neighborhood, has petitioned the Supreme Court for kosher certification. He is arguing against a long-held position of the Chief Rabbinate, which automatically eliminates a restaurant from kosher certification if that restaurant is open on Shabbat. The Rabbinate makes an exception for hotels, and Mr. Vadai argues that this constitutes unfair discrimination against restaurants. He says: “Absurdly, an Israeli backpacker can roam around the world and almost anywhere can find a Shabbat meal with the payment arranged before or after the Sabbath. In Israel and in Jerusalem, its capital, young people have no option like that. Ironically, instead of helping fill the vacuum, the Chief Rabbinate creates it.” In his lawsuit, Mr. Vadai stresses that he is only asking to be certified to do what Jewish law allows him to do: Warming (not cooking) of food on the Sabbath and serving it to customers (similar to what hotels are allowed to do). Will the Supreme Court grant Mr. Vadai his petition? Stay tuned.

The Importance of Local Jewish Magazines

The Music of Our Lives