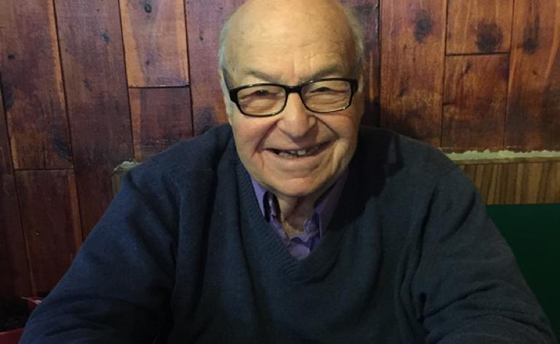 My father Leonard (Lenny) Weinberger (89) had been in and out of the hospital over the past year for congestive heart failure. We got the call early Tuesday morning October 22. There is often a need to delay a U.S. funeral for arriving relatives from Israel due to the long travel time, but my father’s situation was an exception: He had died in New York on the night of the second day of the Simchat Torah holiday, which is regular time in Israel. I thus flew to New York on a diaspora Jewish holiday, a day when there are no burials.
The funeral was held Wednesday morning Oct. 23 at 9:00 a.m. at Boulevard-Riverside Chapel in Hewlett on Long Island, with burial afterward at the huge Beth David cemetery in Elmont, NY. My father now lies next to his own parents.

Through the shiva and now moving forward, the Jewish mourning process has been doing what it is supposed to: taking the mourners (in this case me, my mother, two sisters, and brother) out of regular time to mourn, and then gradually reintegrating them back into society. What was especially impressive to me and Sarah was the extremely large number of family and long-standing friends who came to the funeral and shiva. Perhaps this could only happen in America’s largest city. On my father’s side, I have 13 first cousins, all of whom live in the general New York metropolitan area, and with just one exception, I saw all of them at the funeral and/or shiva. Indeed, I, and my sister Marissa, are the only ones of the cousins to have made adult lives outside of New York. A similar situation holds true with New York friends. All throughout the shiva my sister Jessica, at whose home in North Woodmere I “sat,” was visited by many friends whom she has known for over four decades. And peripherally I have also known these friends for that long. There is something deeply rewarding in being with a friend with whom you go way, way back.

Sarah, whose first cousins are spread out across the country, was envious: “After 120, when I am in this position for my own parents, I will consider myself lucky to see just a few people, family or friends, who know me for 40 years.”

It was impractical, sadly, for any of my children, all of whom were close to my father, to come in for the funeral or shiva. Given Israeli society, this was all the more disappointing: in Israel’s pro-family culture, the funeral of a grandparent is a major lifecycle event, and it is accepted and even expected for grandchildren to play a significant role in the shiva, helping out and welcoming visitors.

Among our Anglo friends in Israel, there are three practices concerning shiva for a parent who is buried abroad: 1) sitting the whole shiva abroad; 2) sitting abroad, but then flying home and inviting friends over for a night when they can visit with you; 3) sitting abroad for part of the shiva, then flying home to Israel and sitting the remaining days of shiva in one’s own home. My sister Marissa and my brother Everett went back to their respective homes in Potomac and Manhattan on Saturday night Oct. 26. I chose to sit the entire time with my mother and sister Jessica, feeling that the long trip to Israel would be too disruptive of my shiva. As far as option #2: after experiencing the full and exhaustive shiva, I was not up for an 8th day in Israel; plus, my good friends have found ways to contact me.

My daughter Rebecca wrote the following in honor of my father, and it was read at the funeral by Sarah: “Anyone who knew our grandfather knew of his generosity. Grandpa never cared about fancy cars or jackets, but he would invest every penny he had to bring us all together on a family vacation. We didn’t get together very often due to the distances, but the feeling was that home for our family wasn’t a house or a country. Home for us is the feeling when we all get together and our hearts are filled with joy, love, and happiness. Grandpa, you made us appreciate each other and cherish every moment we spend together. We will always miss you Grandpa, but we have so many wonderful memories to hang on to; your guidance and love will carry us through many, many more years. We all wish we could be there, but we know you would also get mad if you heard how much the tickets cost.”