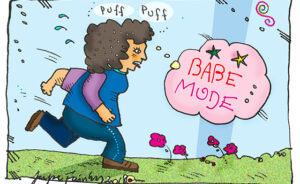 A RELATIVELY TERRIFYING medical test occurred at an ungodly hour because the hospital owns one MRI scanner. In the middle of a freezing winter night, testing for potential diagnoses that one does not want to hear uttered and I went alone. My husband, a man who never goes anywhere and never has anything to do if it doesn’t involve me, was suddenly obligated to take care of a family matter in London. I survived the sterile tunnel wearing earplugs, singing every word I could remember from the shows “Mame” and “West Side Story,” and remembering that there are women who are battling illness every single day, fighting for additional time on this planet. Resisting the near-irrepressible itch to press the panic button, I struggled to feel grateful for receiving First-World medical care for free. Because I live in Israel.

Unrelated to the aforementioned event, two days later I visited the lipid-specialist. The word “lipid” apparently comes from a Jewish requirement to give every medical professional a little lip as they tell you that it’s amazing you’ve reached the age of 62 without having a heart attack, “. . . . what with your numbers, just sayin’ . . . .” I was prescribed a two month statin-cocktail (intended to show the government that I have the required discipline to follow a medication regimen) and an application was submitted for enrollment in an experimental program requiring me to drive to Tel Aviv every few weeks for an injection. “You are the right age and your numbers are sufficiently terrible. It’s a pity you haven’t already had a myocardial infarction. We could have gotten you in right away.” Who says Israeli physicians lack bedside manners?

This get-a-grip-on-your-health-department does not come naturally to me. For my entire life, I’ve related to personal infirmity as isolated and aberrant. That double-knee replacement thing was—after recovery and seemingly endless physical therapy—surprisingly vague. Why? Because I have photographs that document my running the Jerusalem Marathon twice and videos of performing death defying stunts for a reality television show. It would take years of recognizing that my inability to join the women’s dancing circle at weddings reflected a dearth of cartilage between the femur and tibia. Post-surgery both times, the doctors warned me that it would take six-weeks to even consider working. Which is why I was back in my studio both times, drugged and defiant, in three.

My husband would have to find me face down on the imitation Afghan-carpet to even suggest that I have a flu which is why I’m truly grateful to our G-d in Heaven that – with the exception of an uneventful lumpectomy, some unmentionable hemorrhoid work, the excising of an unattractive mole and ejecting human beings from my body in a typically female manner – my hospital visits have been few. Hypochondria is the one neurosis I’ve been spared.

Morning walks, gym/pool membership and a mostly vegetarian diet have raised my awareness that “attitude” coupled with “action” should keep me in “babe-mode” for decades to come.

New York native Andrea Simantov has lived in Jerusalem since 1995. She is a contributing writer for Jlife magazine.

Together We Can Make an Impact