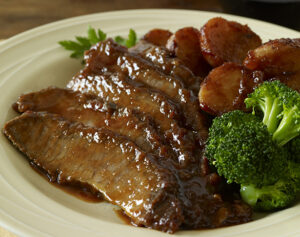 What’s ON YOUR table for Rosh Hashanah? Chances are it’s brisket, and not just any brisket – it’s your family’s treasured recipe, because, as we all know, your grandmother’s was the best, right?

How did brisket become Jewish food anyway? “The earliest Jewish recipes for brisket were mostly from Ashkenazi Jews from Germany.” writes Stephanie Pierson in “The Brisket Book” (Andrews McMeel, $29.99) “What these recipes lacked in creativity, they made up for in familiar satisfaction and bulk. Askenazic food habits ultimately became known as ‘typical Jewish food.’”

We Jews do not have a monopoly on brisket, however. “The Brisket Book” showcases recipes from such far-flung places as Cuba, Ireland and Korea, not to mention dozens of barbecue preparations from Texas, Kansas City, New York and New Orleans. Yet, Pierson points out, the ascendancy of brisket in Jewish kitchens can be attributed to the kosher laws, our love of tradition and economics. Since according to kashruth only the forequarters of the cow may be eaten, brisket is acceptable. And for those who could afford it, back in the old country, brisket was served on the Sabbath or holidays, wrapping it in loving memories of family and community. “Brisket will never be a meal for one,” Pierson quips.

“Economics has always played a part in who eats it, who doesn’t, and why someone would choose Oysters Rockefeller instead,” she writes. “It started as a rare indulgence and is a rare indulgence again today, for two reasons: today’s rising prices…and the fact that rich, fat-marbled red meat is now anathema to pretty much everyone except for a devout Atkins dieter.”

What is the difference between brisket and pot roast? Brisket is a cut of beef requiring slow cooking; pot roast is what you make with it (or with other cuts). In the Russian version featured here, a perennial favorite with my family, brisket is marinated in lemon juice, which tenderizes it and provides the sour backdrop for the sweet and tangy chili sauce that comes later. What makes it Russian is a more difficult question to answer. I doubt they had chili sauce in Minsk!

No matter what you serve for Rosh Hashana, the majestic round challah is a staple. For recipe developer and writer Linda Capeloto Sendowski, author of “Sephardic Baking from Nona and More Favorites” and the brains behind theglobaljewishkitchen.com, making her mother’s challah for Rosh Hashana each year brings back memories of her idyllic childhood in Seattle where her Sephardic family had emigrated from the Isle of Rhodes. “My great-great-grandparents had a bakery and baked for the sailors on the fishing boats,” she recalled. “My mother was always baking. On Friday after school you would get home and there were hot borekas (savory pastries) and bunuelos (cookies) for Shabbat and little rolls called panezikos. And there weren’t any machines. Everything was done by hand. I still have the special crockery bowl she used. She always sprinkled the bread with sesame seeds. Sephardic people love sesame seeds.”

For Rosh Hashana Sendowski continues her family’s tradition of serving certain ceremonial and symbolic foods. “We do almost a Seder-like thing for Rosh Hashana. We have to have certain foods, and there’s a blessing on each item. All Sephardics do it. Depending on which bunch you’re with, they have different items on the list. We have dates and leeks – I make leek patties with ground beef and tons of steamed, finely chopped leeks and breadcrumbs, fried meatballs called kufte de prassa. We have squash or pumpkin, so I make little pumpkin borekas.

For the beets I usually do some kind of salad. Then you have to have fish, so I do a salmon with tomato sauce. And of course, you need the head of the fish – everyone goes ‘eeew!’ For the spinach I bake vegetarian spinach muffin cups. Of course, we have honey and apples. For the black-eyed peas I make a kind of cholent. And for the pomegranates I make a pretty salad with little heirloom tomatoes. steamed beets and pomegranate seeds and serve it in a margarita glass. All these are served both nights before the main course, which could be pomegranate chicken or maybe a rib roast with some kind of pomegranate sauce. And we have the usual desserts – my mother’s special honey cake and baklava. You’ve got to have baklava!”

2  Place 3 cups flour in large bowl. Add yeast mixture and eggs. Combine using wooden spoon or your hands until very smooth. Add additional 2 ½ cups flour, salt, and anise. Work dough until a ball forms. Remove dough to lightly floured work surface. Knead dough with your hands, sparingly adding flour as needed. You may not need to use the entire 6 cups. Dough should be soft but not stick to your hands.

3  Place dough in large oiled bowl, loosely cover with plastic wrap, then cover with tea towel. Place bowl in warm, draft-free place. Let rise about 1 ½ to 2 hours or until at least doubled in size.

4  For two round, coiled challahs, divide dough in half with knife. Roll 1 piece of dough into long cylinder or rope about 4 feet long with one large and bulbous end tapering to the opposite end. With bulbous end in center make tight coil, tucking tail in and pressing to secure it. Repeat with second piece of dough.

3                 Rinse lemon juice from meat, and sprinkle both sides liberally with pepper and garlic powder. Place brisket, fat side up, in large roasting pan.

4  Pour water to depth of about 1 inch around meat, and sprinkle I envelope of the onion soup mix, brown sugar, about ¾ of the chili sauce, and the garlic over meat. Cover pan tightly with aluminum foil and roast 2 ½ hours.

5  Add ½ cup water to remaining chili sauce in jar, shake, and stir mixture into liquid in roasting pan. Add some of the remaining soup mix to taste. Add potatoes and baste. Roast, uncovered, until potatoes are fork-tender and caramelized, 1 hour. Liquid will reduce to a rich, caramelized sauce. If too thick, stir in hot water, ¼ cup at a time, until it reaches the desired consistency.

6  Remove meat from pan, slice diagonally across grain, and serve with potatoes and sauce.