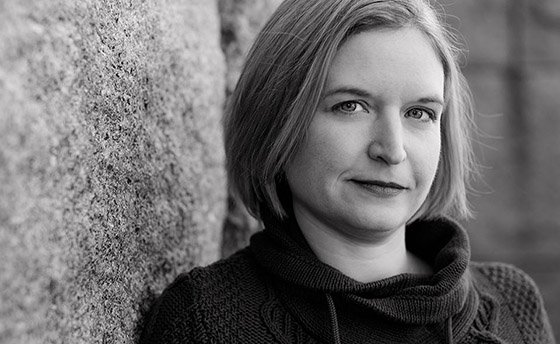 Rebecca Erbelding, whose work has appeared on The History Channel, National Geographic, NPR, PBS and the BBC, is a curator and archivist at the US Holocaust Memorial Museum in Washington, DC. Her first book, “Rescue Board: The Untold Story of America’s Efforts to Save the Jews of Europe,” won the 2018 JDC-Herbert Katski National Jewish Book Award.

What drew you to study the Holocaust professionally?
I’m from a really small town in upstate New York that had no Jewish community to speak of. I came to the Holocaust Museum in DC in 7th grade with my Girl Scout troop the year after it opened, in 1994, and I thought it was the best museum I’d ever been to. I saw it the way you do when you’re 12, like, I can figure this out, I will understand the Holocaust, how it happened and why it happened…I went home and read everything I could find.

In college I got an internship at the Holocaust Museum and I basically never left. For 12 years as an archivist I was responsible for helping people navigate the process of donating family papers to our collections. While I was working, I went back and got my masters and then my PhD in American History. For my dissertation I talked to colleagues, I looked at books and realized nobody had written a history of the War Refugee Board, which was the official US response to the Holocaust. I tried to find out as much as I could about the Board on my own time while still doing my regular museum work.

Why wasn’t the War Refugee Board better known, and where did you start?
Historians had written a little about the War Regugee Board, but they were mostly relying either on the Board’s summary of its work from the summer of 1945, or they would use the Board’s papers, which in some places are divided into topics: “Our Work in Turkey,” “Our Work in Sweden,” “Our Work in Switzerland,” but not in any kind of chronological order, not in a great deal of order at all.

From the very beginning I thought, that takes away the element of time.

I started at the Holocaust Museum–they have microfilm of a lot of the Board’s papers from the FDR Library. I took pictures of everything I found. It ended up being 120 boxes just of Board papers, and then I added in State and Treasury Department papers and ended up with about 43,000 different documents. I gave them all long filenames with dates and what archive and box I found them in, and then I sorted and read chronologically.

Now there were things I could piece together that we didn’t know before. The US actually launders money into Sweden to get refugees out of Lithuania, Latvia and Estonia through a Goodyear tire factory—I pieced that together from one or two documents each from three different archives, You’d have to have access to all of them to see that it’s happening.

The concept of rescue really changes a lot in 1944. Who you have access to, what imprisoned populations you have access to, changes before and after D-Day as Romania and Turkey leave neutrality and join the Allies. That really changes where the War Refugee Board can work and what they can do. There are simultaneous things happening in different countries, but you see in the book that everything that happens before D-Day, happens before D-Day. Everything before the arrival of refugees at Fort Ontario happens before that. What’s happening in the war, what information the War Rescue Board has at any given moment, affects what they decide to do.

Your book has the full story of how the State Department blocked US aid for Jewish refugees, but few people know the Treasury Department created the War Refugee Board to get around them. How did John Pehle come to lead that?
Pehle was in his mid-30s, and had already been in charge of US economic sanctions at the Treasury Department. So a really significant job held by a really young person who was managing a staff of 1500 people. The State Department obviously should not have blocked the Riegner telegram from them. When he and his colleagues came to Treasury Secretary Henry Morgenthau and said this is a serious problem, we need to do something, Morgenthau trusted him.

Why did it take so long to set up?
You see where the War Refugee Board is trying to get information out to Switzerland or wherever, and the State Department really drags their feet. It gets better over time but it’s never perfect.

We also need to remind ourselves that you’re sending things by telegram, often coded telegrams, so these things take a lot of time. There’s often erroneous or delayed information. Sometimes that’s the fault of the State Department or the War Department, but often it’s just the fault of wartime communication in 1944.

Pehle doesn’t have a strong personality to write about; he’s not abrasive as Hirshmann could be, he’s not as funny as DuBois could be. But I found a letter that Pehle sends to a priest at his former college in Omaha. The priest basically said, “the Jews are hard to work with, and if they had kept their skirts clean this would all have been easier for them.” Pehle writes back and strongly rebukes the priest in very modern language. It’s the most personal thing I ever found written by Pehle but it gave such a great view of who this man was and how quietly and steadily dedicated he was to this work.

When did you branch out to talk to the families of the major players?
I first approached the families in 2012-13 when I was almost done with my research. I didn’t want to waste anybody’s time with silly questions about historical facts, I wanted to ask them what their dad was like. Did he collect pipes like John Pehle did? What did he think of this? All of these little details, that is the fun part, trying to find out what it was actually like.

So much is dependent on relationships. In August 1943, John Pehle’s second son is born, just around the time he’s discovering children are being taken away from their parents and being sent alone on trains to Poland. I couldn’t prove this because Pehle never talked about his feelings in interviews, but it must have affected him.

It must have startled Pehle that his boss, who was Jewish, wanted to tread cautiously.
Morgenthau is consistently nervous about appearances, and it really takes the prodding of his non-Jewish staff to push him into action. Morgenthau is a close personal friend of Roosevelt. As the only Jewish cabinet member he’s also very sensitive to doing anything that will hurt the president.

FDR is a politician, not a humanitarian. By 1944, the creation of the Board actually solves a lot of problems for him: the conflict between State and Treasury, the congressional bill calling for some kind of rescue effort, and at this point he hasn’t committed to running for a fourth term. And this part is crucial: the Allies are winning. One reason the Board is successful is it can negotiate with neutral governments—Switzerland, Sweden and Turkey—and convince them to do more. In 1942 it would have been a lot harder.

How pivotal was the declaration Pehle crafted for FDR to give, that the Nazi genocide was a crime and that after the war the US would punish anyone who collaborated with it?
One of the fundamental problems of psychological warfare is that you can’t count the number of people dissuaded from action. It’s one of those arrows in the dark. But I did find an interview with an elderly German man who remembers finding that statement in a potato field, dropped by an Allied plane. He was 13 or so, a member of the Hitler Youth, and this was the most information he ever got about the Holocaust, and he believed it. It’s really hard to say what effect that statement had but it was a very strong statement.

At one point, the War Refugee Board attempts an exchange with the Nazi regime, 400,000 Hungarian Jews for Allied supplies. Did the Board really think that ransom was viable?
Yes. The Joel Brand deal failed, but the Nazis see that the Americans are at least considering it, so they offer to negotiate. Roswell McClelland and Saly Mayer manage to string along a group of high-ranking Nazis for six or seven months. They eventually get more than 1600 Jews out of Bergen-Belsen as a good-faith gesture on the part of the Nazis. The Jews of Budapest are never deported en masse and many survive, in part because they’re being held by the Nazis as collateral. So it’s not nothing.

Did you find parallels to modern times?
I wouldn’t say parallels, but you at least see an example of what could be done. I have found that staff at the State and Treasury departments now are really interested in this because the Board was confronting a lot of the same challenges we’re confronting today, bringing in refugees in an age where national security is a huge concern. They’ve been really interested in this book, because they didn’t really remember this part of their agencies’ history.

What was your reaction to finding you’d won the National Jewish Book Award?
I found out in January that I had won, and won specifically for archival research. I was dancing around my house and went to the dinner, and it was like a dream come true.

Rebecca Erbelding will speak as part of the Jewish Federation’s Jewish Book Festival at the annual Kristallnacht Memorial Lecture held at the University of La Verne on Sunday, November 10. For more information or to RSVP, visit www.jewishsgpv.org or call (626) 445-0810.
Deborah Noble is a contributing writer to jlife magazine.