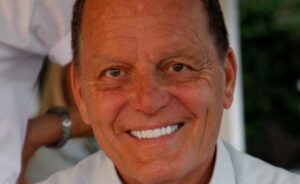 I spoke with nine-time Emmy Award-winner David Lee to discuss the revival of “Ragtime: The Musical” coming to the Pasadena Playhouse in February. The Jewish Federation will host a community night on Thursday, February 7, at the theater for that evening’s performance so I wanted to find out more about the show, Lee’s involvement, and the musical’s relevance for today’s audiences.
The story opens circa 1900s New York. It focuses on newly arrived Jewish immigrant, Tateh, his daughter, a white affluent Christian New Rochelle family including Father, Mother, Mother’s son, and her Younger Brother and how their lives intersect with those of Ragtime musician Coalhouse Walker, Jr., his love, Sarah, and their baby. When Mother discovers an abandoned African-American baby on her property, evidence leads to the local maid Sarah. Mother takes Sarah and the baby into her home forever changing the family’s life. Happenstance eventually brings Mother and Tateh together, another turn of events adding to the show’s enduring appeal. Characters interact with historical figures such as Evelyn Nesbit, Harry Houdini, J.P. Morgan, Emma Goldman and Henry Ford, providing breaks from what is primarily a pretty heavy story.
Lee, who always loved the show, came on board serendipitously. “Danny [Feldman, Producing Artistic Director] at the Pasadena Playhouse one day said, ‘I wanna do Ragtime,’ and I went, ‘I’ll do that.’ That was what went into that decision,” despite it being off his radar at the time. The show is a huge production for this historic venue and Lee is loving it. “It’s not without its challenges, but sometimes when you do a large production in a smaller theater, it gains a lot because of the closeness of the audience, the contained nature.”
Lee found an interesting way to put his touch on this new production. “When I first started thinking about the show, I was going, ‘Okay, it has to be smaller scale but there’s a lot going on,’ but generally I started thinking about a podcast that I listen to called The History of the World in 100 Objects. Basically … it tells the history of the world but it does it by concentrating on some found object from history like a stone statute from Greece. Then it concentrates just on that and what was going on around that time and why that came to be kept in a museum or something.” Lee wondered if you could tell the story of Ragtime in 100 objects inspiring his concept of history stored away and forgotten.
I asked if Mother is the lens through which we as an audience should watch the musical. Lee responded, “… They have a lot of lenses to look at it through … The story of Mother is about a woman in a male-dominated society having a revelation about herself and her place and what she’s capable of doing and doing it … That’s a great lens to look at it through because I think there’s a lot of resonance around that today. There’s also looking through the lens of Jewish immigrants. This particular story is about going from the worst conditions (getting off the boat) and follows it through this particular character becoming a success in Hollywood. Then there’s the Coalhouse Walker part … That’s the tragedy of this piece, looking at the black experience and violence and prejudice and bigotry.”
When Ragtime was first published, Lee said he thought, “How smart to set something in 1906 that had relevance in 1975. When the musical came out 20 years later I thought, ‘Oh, sadly this is still relevant.’ Now that we’re doing it 20 years after that I’m going, ‘Oh, sadly it’s still relevant.’” Audiences will agree. “This is a show that’s about the problems that immigrants have, them being oppressed upon their arrival. They’re being treated worse than dirt, then struggling to find their place. It’s a show about violence on black people, about ‘is violence in response to that a proper response?’ As I said, it’s a show about women finding their voices and acting with strength and determination after living in a society in which they were basically second-class citizens. I don’t think you have to be a member of one of those groups to actually be able to look at the show through all of those lenses, because all the … Anti-Semitism is rampant again. Women trying to find their voice and their place as equal members of society is everywhere today. Certainly, as I said, police violence against African Americans is seldom out of the news.”

On the character of Younger Brother Lee says, “I think if this show were written today he would be the guy who still lives in his mother’s basement, or in this case, sister’s basement, and spends all his time either gaming or online on porn sites, but is still desperately trying to find some cause in his life, and he gloms onto something that he’s found online and makes that his righteous journey. It’s a character that really seems vivid to me. I know who this guy is, only because … I know who those types of people are now…” Lee noted how the revolutionary spirit got worked up in Younger Brother. “One of the things that I love about this show is that it’s in and out of metaphysical things at the drop of a hat. At the end of the night that [Emma] Goldman spoke at Union Square where he’s talking about stumbling upon this woman giving this speech and it changed his life, the last line is, as she turns to him and says, ‘I’ve been waiting for you.’ All of a sudden you go, ‘Well of course the world has been waiting for him.’”

I asked Lee about imagery in Ragtime especially pertaining to the Jewish immigrant. “…when you first meet Tateh he just says, ‘I’m an artist.’ Then the next thing you find out is he has figured out a way to make his drawings move by making them flip-books. That catches the eye of, in this case, a train conductor, and he realized, ‘I can sell these moving images.’ Later when you find out, after some absence, that he has gone to Hollywood and become a pioneer in the film industry you go, ‘Well of course that’s where that comes from.’ There’s great imagery all the way through, but the second number of the show is Father leaving to go on his exploration of the North Pole just as Tateh is arriving on a passing ship. That imagery of two ships passing each other, one going from, one coming to America, and each person having pity for the other one. Tateh has pity for Father, ‘Why would you leave such a wonderful place as this?’ Father is saying, ‘Oh, you poor wretch about to land on these shores. Well, too late for you.’”

Will people leave with hope for the future? “Ultimately,” says Lee, “that’s why I really wanted to do this, because the show crosses a lot of rivers of despair during its two and a half hours, but it finally does leave you with a little bit of clarity and … hope. Personally I could use a little bit of that right now.

RONNA MANDEL is a contributing writer to Jlife magazine. you can find her blog at goodreadswithronna.com