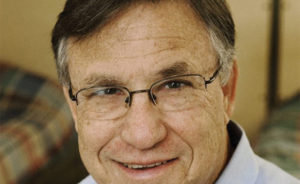 He was a longtime PJTC member. His children celebrated their bnot mitzvah at the temple. A few weeks before his death, he had an aliyah, and facilitated a discussion of social justice in Jewish tradition, during High Holidays. He chaired PJTC’s Social Justice Committee since its founding in early 2017. Under his leadership, the committee has been a vibrant force in the temple and in the wider community, attracting new PJTC members and energizing existing members through its work on a variety of issues.

At the funeral and shiva services at the temple, Marv’s family, friends and colleagues testified to his personal integrity, scholarship, dedication to his family, sense of humor, and deep commitment to social justice. Rabbi Laura Geller, who attended Hebrew Union College-Jewish Institute of Religion, the reform rabbinical school, with Marv, recalled how he was the biggest male advocate for the ordination of women at a time—in the 1970s—when that was highly controversial. Pasadena Mayor Terry Tornek said that Marv, a good friend, could be a tough advocate for policies to promote racial, economic, and housing justice. Several speakers noted that despite his health and physical hardships, Marv never felt sorry for himself and never complained. He believed he was lucky to have been able to use his intelligence and talent to serve others.

Most Pasadenans knew Marv as the CEO of Union Station Homeless Services. Under Marv’s leadership, Union Station dramatically expanded its operations, from 22 employees and less than $1 million budget when he took the reins in 1995 to a 90-person operation and an $8 million budget, providing emergency services and shelter, counseling, and transitional housing for people without homes, when he retired in 2016. Thanks in large part to Marv’s efforts, Pasadena is one of the few cities in Southern California where the number of people without homes has been on the decline. The staff, volunteers, and guests at Union Station loved Marv for his kindness, empathy, and sense of humor. He was also a damn good fundraiser, employer, and administrator.

Marv grew up in Evanston, Illinois and attended Amherst College. During his college years, he spent a year living and working on Kibbutz Givat Chaim in Israel, an experience that cemented his strong ties to that country for the rest of his life. After graduating from Amherst in 1970, Marv spent several years as a community organizer for the Jewish Council of Urban Affairs in Chicago, a group dedicated to addressing poverty and racism, and building bridges between the Jewish and Black communities. In that job, he coordinated a ground-breaking conference on the mortgage and insurance industry and organized residents of minority communities against bank redlining (racial discrimination) and slum housing. That work helped lead to the passage of the Community Reinvestment Act by Congress in 1977, the nation’s anti-redlining law. A fervent peacenik, Marv also worked as an organizer for the Vietnam Veterans Against the War.

Marv worked on several campaigns for progressive candidates and considered pursuing a career in politics but instead he decided to become a reform rabbi. He attended HUC-JIR in New York and Jerusalem. While in rabbinical school, at the request of the State of Israel, he spent a month in the Soviet Union, helping rescue Soviet Jews so they could emigrate and escape anti-Semitism. After he was ordained in 1976, and served as the rabbi for Congregation Sherith Israel in San Francisco (1976-79) and Temple Sinai of Glendale (1979-86), and as an executive with the Jewish Federation of Los Angeles (1987-94). He also served as the Social Action Chair of the Board of Rabbis of Southern California, as Co-Chair of Clergy United for Prophetic Action, and as a leader in the campaign for the nuclear freeze. He was also active in the Jewish Labor Committee. In 1986, he worked as the deputy statewide field director for Sen. Alan Cranston’s re-election campaign.

Although Marv retired from Union Station in 2015, he never retired from the struggle for social justice. He was a key figure in the successful campaign for a $15 municipal minimum wage in Pasadena. He was a founding board member of Pasadenans Organizing for Progress (POP), which brought him back to his community organizing roots. Although Marv didn’t have an official pulpit after 1986, his congregation was the movement for social justice. That included his many appearances at Pasadena City Council meetings, rallies, and protest marches for immigrant rights, police accountability, workers’ rights, tenants rights, and racial justice. Those causes became the centerpiece of Marv’s leadership of PJTC’s Social Justice Committee. Driving around Pasadena, you’ve surely seen some of the many lawn signs that read, in all capital letters, “Immigrants & Refugees Welcome” along with a quote from Leviticus: “We Must Not Stand Idly By.” That was Marv’s idea and it became a project of the Social Justice Committee. Last January, Marv inaugurated PJTC’s first Social Justice Sabbath, an interfaith service between PJTC and Pasadena’s First AME Church, timed to coincide with Martin Luther King Day. Marv officiated during the service and Rev. Larry Campbell gave an inspiring sermon. (We intend to make this an annual event, including one on January 17 next year). In October, Marv was honored by the Pasadena NAACP for his community activism and for his commitment to building bridges across racial lines.

Organizations like Union Station are often viewed as a form of charity, where better off people provide aid and comfort to people suffering from disease, poverty, or some other affliction. Marv believed in charity. But even more, he believed in social justice. He wasn’t a do-gooder. He was a radical. For example, he believed that housing was a human right and that everyone deserved a living wage. He was inspired by the teachings of the Jewish prophets and the examples of Jewish activism in labor, civil rights, and other progressive causes. So he played a major role advocating for changes in public policy in order to prevent homelessness and lift people out of poverty.

Many Pasadenans were impressed by Marv’s warmth and sense of humor, his passion for justice, and his strong Jewish identity. He was an iconic and beloved figure. He didn’t have an ounce of hypocrisy in his being. Even people who disagreed with Marv’s progressive political views respected his dedication to the poor and disadvantaged. After he retired from Union Station, Marv helped mentor young executives at several non-profit organizations, so they could benefit his experience.

Marv was surely a hero, but he wasn’t a saint. Injustice made him angry and he could occasionally lose his temper when people in positions of authority lacked compassion or abused their power. You didn’t want to be on the other end of Marv’s temper.

In the past year he was also thrilled to officiate at his grandson’s bar mitzvah and his daughter Becky’s wedding, to welcome his new granddaughter Anisha, and to start co-hosting a new radio program with Rev. Hannah Petrie, “POP Talk,” that explored issues facing everyday people in Pasadena. He was also an enthusiastic sailor, an avid reader, a committed baseball fan and a generous friend.

The PJTC Social Justice Committee, Union Station, and POP will be cosponsoring a community celebration of Marv’s life and legacy in February. His memory will be a blessing!

Peter Dreier teaches politics at Occidental College and worked with Marv through the PJTC Social Justice Committee and Pasadenans Organizing for Progress.