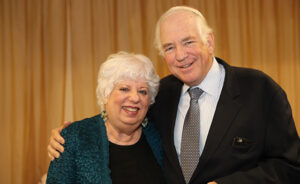 RABBI ALAN LACHTMAN will be honored for his 42-plus years as Temple Beth David’s spiritual leader and for the tremendous contributions he has made within our community at the 2018 Honoring Community Leaders brunch, on Sunday, October 21, 2018.

JLife SGPV had the opportunity to sit down and speak with him on a wide range of topics ahead of his receiving the Jewish Federation’s honor and as a chance for him to reflect back on his career that has spanned five decades in the community.

You have been in the community for over 40 years…. What do you remember most about when you first started as a rabbi in our community?

It was an overwhelming experience for me. This was really only my second pulpit and I was 29 years old when I was elected Rabbi at Temple Beth David, after being the Education Director of a Reform congregation in Berkeley. I was a young rabbi of a very mature congregation. I had to not only get to know my congregation, but also the different personalities of the other six or seven congregations and the community as well. While I was enamored with the challenges and there were quite a few at the time, I was definitely overwhelmed.

Over the years, you must have seen a lot of changes in the community. Are there a few that stand out as the most significant?

When I first got to the community, one of the things I noticed right away was the lack of a Jewish preschool and Jewish Day School. Thank goodness we had the support enough to be able to work for both B’nai Simcha and Weizmann to be able to make those dreams a reality. I remember when we didn’t have any bagel stores. I remember when, in terms of good things, when six congregations got together for a Purim carnival and we got together for Midrasha. I remember those joint community exchanges and how wonderful it was to meet the leadership. And then as a young rabbi, I got the chance to meet some of the senior rabbis in the community and I was most impressed with Rabbi Maurice Galpert and him taking me under his wing, as a Reform rabbi himself. Although he was not leading a Reform congregation, he had lots of wonderful ideas he shared with me, programs that we could implement together. And so that was really nice and it is very different now… the challenges are different and the face of Judaism has changed as well. You know the ethnic changes have enriched us in many, many ways. We are no longer the Eastern European-looking community we once were; we are now more reflective of the social and cultural dynamics of our community.

What have been the most valuable things you have learned during the course of your time as Rabbi in the community?

How important it is to share our diversity and accept new traditions. How important it is for Judaism to not just emulate the past but to have its own character so that we can better fulfill the needs of the next generation. I think about how I have survived three prayer books, how the liturgy has changed, and how some of the customs have changed. In my congregation, when I first started, I was discouraged from wearing a yarmulke, but I did so anyway because I felt that was the way Judaism can make coming to synagogue special.

What hopes do you have for our community moving forward?

Well, I hope that as we pass the baton and the leadership roles to the next generation, they take part of the message, part of the values, part of the goals and dreams that were worked hard for and help to shape the future. We always look back, but we are not limited by the previous generation. I wasn’t limited by the previous generation, although we had to fight to make our changes. Each generation puts its own stamp, its own mark, and its own emphasis on the coming generations. I hope that the legacy we leave behind is a building block for the future. I hope that our congregations will do more programming together and reach out to one another in more significant ways and that the community will be diverse and not splintered, but united without trying to be uniform.

What do you wish people, outside our community knew about our local Jewish community?

How wonderfully warm and diverse our community is and that our heart is usually open. And while we don’t have as many Jewish institutions, people can have a vitally Jewish life here through participation with our synagogues and the Jewish Federation. Without our diversity, we will not grow and without diversity, we will not be able to move forward. Without the diversity, we are sort of stuck in a rut. I remember as a young rabbi, the amount of roadblocks and stumbling blocks put before women who wanted to be a part of the rabbinate and be part of the cantorial society. I am thrilled that there are more women being ordained as Rabbis and Cantors for our community and that speaks well for the future and for the diversity that we seek and the egalitarian approach that we seek in our lives that should be reflected as well in the traditions of our faith moving forward.

In September’s JLife, there was an article about the value of connecting to a community. What has it meant to you and your family to be a part of the Jewish community? And, how do you think people benefit by being a part of the community?

I have often used the expression that Jews are like coupons in a coupon book. They are void if detached. Our lives are enriched by affiliation, relationships, and when we share ideas and ideals. We are not a uniform community but we are a united community. We cannot live life in a vacuum and if we don’t have the sense of community then we are not as effective. I think that by being connected one to another by working on projects… whether it’s for political, social, economic or environmental areas, that we are stronger as a community… not as individuals. When we work for the hunger campaigns or when we work for the animal shelters, when we do it as individuals, it is not as powerful as when we stand up together with a united voice.

What has been a couple of your most memorable experiences in our community?

One of the most memorable experiences goes back almost 40 years when Temple Beth David was attacked by two arsonists and the sanctuary was devastated and we really didn’t have a place to hold our services. The outreach and offerings from our community were substantial, not only just from the Jewish community but the non-Jewish community who reached out to us with cards, letters, financial aid. How the Knell family stepped forward to help us with supplies when they were running Ollies. The meaning there is that when someone is in trouble, people didn’t say, “That’s too bad.” Instead they said that is “part of my responsibility too.” That was a real testament of what our community meant to all of us. When we took in the boat people, it was a significant mitzvah for all of us. You know, sending our children to Washington, DC, to learn how to lobby and speak about social issues that often go unaddressed and having people in our community in our congregation support that, such as the Kohl family, has made a tremendous difference for children and our scholarships for sending children to camp have really made a difference. It is because our congregation and our community cares. You know, we don’t have a fancy building but we have a big heart. That big heart has been reflected by other congregations and by other religious groups. I am just so grateful for the decades that I have been able to be here and try to be Jewishly warm, caring and relevant for my congregants and the non-Jewish community looks upon me as well. And I am grateful for my congregation allowing me to pursue my degree as a Marriage, Family and Child Therapist and to also let me serve our country as a United States Army Chaplain for 29 years. Many congregations would not have shared the rabbi for personal and career growth and my congregation has been very indulgent.