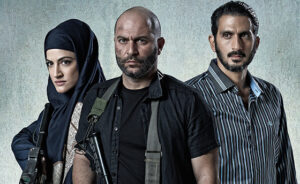 If you were in Israel at the end of 2019 and the beginning of 2020, you couldn’t miss the huge billboards advertising the third season of Yes television’s Fauda (“chaos” in Arabic). Each billboard featured a close-up of the grim, bloodied, unshaven face of Lior Raz, the star of the series, with three English words transliterated into Hebrew and indicating the setting for the new season: “Velcome to Gaza.” Fauda has been a runaway hit on Netflix (which is expected to air Season 3 this Spring), and so you will understand my special delight at three Passover commercials produced last year by the Supersol supermarket chain starring Lior Raz.

Each commercial opens with Lior doing something connected to Passover. In one, an average Joe (“Yossi” in Israel) happens upon Lior as he is scraping something off his home’s front window, and Yossi says, “Lior Raz, you clean for Passover”; in another, Yossi sees Lior in a Supersol store and says “Lior Raz, you shop for Passover?”; and in the third, Lior brings out a tray of baked salmon to his seder guests, one of whom asks him, “you found such a fine salmon?” In all three commercials, Lior then says “Why, what are you thinking?”—and the scene in each instantly shifts.

In the first commercial, two large white vans screech to a halt in front of Lior’s home, and a wet-suited SWAT Pesach-cleaning team emerges, some using high-pressure water hoses and some rappelling down the front of Lior’s house to squeegee the windows. The second commercial has Lior hopping on a motorcycle in the supermarket, directing in this case a SWAT Pesach-shopping team. The third commercial has Lior jumping out of a plane without a parachute, diving deep into a river, and snaring a salmon bare-handed, as wild bears look on from the shore. In all three commercials the action scene abruptly ends and the viewer is returned to the opening scene, with Yossi saying: “oh, nothing—can’t a guy ask a question” (the third commercial ends slightly differently). Lior then wishes Yossi “Happy Holiday,” and the commercials conclude with this voice-over: “Getting ready for Passover? No need to make a drama out of it. This holiday is ‘all’ Supersol’s” [playing on “kulo,” a key word of the beloved Mah Nishtana segment of the Passover Haggadah].

It’s hard to overstate the importance of such commercials for connecting Israeli identity with Jewish-holiday observance. In this case, the three commercials normalize cleaning and shopping for Passover in Israeli society. The incredible power of these commercials comes from playing off the surprise of “catching” Lior Raz preparing (or having prepared) for Passover with the imaginary “action” scenes. The punchline here is of a fortiori nature: If in reality even the star of Fauda cleans and shops for Passover, then so should I.

In a Jewish majority culture, the holidays of Judaism are the country’s national holidays. Because of this, business and advertising firms will utilize Jewish culture for their own interests, such as causing Israelis to feel that it is only natural to prepare for Passover. Not that Supersol or anyone else could convince Israelis that shopping and cleaning for Passover is fun (there are limits after all to advertising genius), but that Israelis are made to feel: this is what is done here.

This Too Shall Pass