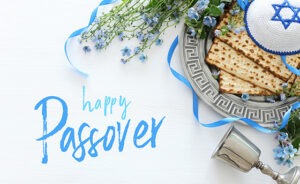 Passover means something different to anyone you ask; a European Jew has different customs than a Jew from a Middle-Eastern country, and Orthodox Jews’ customs differ slightly from someone who is Conservative. A Passover Seder presents the opportunity for engagement and education in a fun and interactive way. Families incorporate a variety of traditions which allow everyone to be part of the experience. Some families set up a scavenger hunt for the afikomen, others sing songs with percussion instruments, some perform plays from part of the Hagaddah, some use puppets and/or props for the plagues, some make animal sounds for Chag Gadaya, and some even use green onions as slave whips as they march around the table singing. When our children grow up learning their family’s traditions and seeing how we value their participation and engagement, they are motivated to continue the traditions into the future. One thing is for sure: We all celebrate when sitting together and looking at the beautiful seder plate with all the various foods representing our freedom. Back then, we all experienced harsh slavery and today we remember this by eating special foods to commemorate those days.
Growing up, we had a very traditional Ashkenazi seder at our house. I come from a small family, so it was just five adults and myself. Being the youngest in the house, I sang the Ma Nishtana, my grandfather read from the Haggadah, and we all followed, we drank the four cups of wine, had our meal, I hid the afikomen, then gave it back when I was promised a present, and then we sang some songs. We concluded with me opening up the door for Elijah the Prophet and then we sang “Next year in Jerusalem!” I knew that this was how Passover was done, and this was what I was taught at school. We never went away for the holiday and only had my uncle as a guest. As I got older, I would discuss with my friends how their seders went at home, and they all had the same story of what events took place. It was not until I was 20 that I started experiencing different types of seders.

Unfortunately, my grandmother was very sick and passed away back in 2008, a few days before Passover. We did not even think of Passover at that time since we were busy visiting her at the hospital daily and knew it was only a matter of time until she would pass. Our neighbors were nice enough to invite us to their house for Passover and even though we were sad and heartbroken, we still found it interesting to see how another family celebrated the holiday. We really enjoyed seeing so many children gathered around the table and all the chaos involved, I was truly amazed, coming from a small family and not having any siblings. The family seemed so lively and happy and I fell in love with their soup. Even though it was the same soup that we made annually, they added yams to it, which to me made a world of difference. To this day, when I cook matzah ball soup, I add yams to it for extra flavor.

The year after that, we went to a Chabad House to celebrate. We were still sad over my grandmother’s passing and did not feel like celebrating at home quite yet. The majority of the people there were Russian and since we do not speak Russian, we found it intriguing to see how they would read the Haggadah and what type of food they would serve. They read the Haggadah in Hebrew which we understood, and then translated it into Russian for those that did not speak Hebrew. The Rabbi’s children served the people, and again, it was nice to see so many children part of this beautiful holiday, all taking a part in it and helping out the younger siblings.

It was not until 2010 when my husband, who was my boyfriend then, invited me to come celebrate Passover with him and his family in Seattle. Some of his siblings are married to Middle Eastern Jews, so this was the first time I joined in on something that I never was part of in the past. The family read the Haggadah in Ladino and translated it into Hebrew and English. They offered a few different types of haroseth, and even though my husband and I are adventurous eaters, we stuck to what we knew and felt comfortable with. But, the rest of their dishes were delicious.

Since then, we created a family of our own and even though we have been celebrating Passover with our kids for a good number of years, our customs always slightly change from year to year. Our children teach us what they learned about Passover that year, and then we incorporate that into our traditional seder. We now have lots of toys, games and activities on the table that have to do with the seder. Our kids sing to us the songs that they learned in school and teach us what they were taught. Sometimes it is completely new information, and other times it is material that we learned from our own parents and grandparents growing up. The one thing that all seders have in common is being with people you love and sharing those precious moments together, and hoping that one day, your children will pass on these traditions to their future kids.

RACHEL STERN is a contributing writer to JLife Magazine.