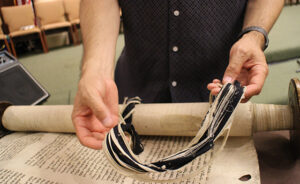 The Czech Torah scroll at Temple Beth Israel in Pomona holds a place of reverence in the congregation’s hearts. In 1983, five b’nai mitzvah families, the Ambroses, Joneses, Lawrences, Selznicks and Shaletts, banded together to sponsor its adoption through the Memorial Scrolls Trust, which was set up by Westminster Synagogue in London as an independent organization to care for a large collection of Holocaust Torahs rescued from Prague.

Sharon Lawrence, the mother of one of the b’nai mitzvah, recalls, “I had been to another synagogue that had a Holocaust scroll and I went to our rabbi at the time, Earl Kaplan, and said wouldn’t it be great if we had one for TBI. My ex-husband and I had been in England and heard about Westminster Synagogue’s program. So we went to London and either we picked out a scroll or they picked one for us, and they sent it to LA by boat.”

The Memorial Scrolls Trust’s letter of transfer dates this scroll to the mid-19th century, and identifies it as one of three from the Tábor Synagogue, but it’s not clear whether it was from Tábor or was brought there on the way to Prague. Like many other rescued scrolls, TBI’s Czech Torah was quite fragile and deemed pasul, too damaged to restore to kosher status for reading.

“There was discussion as to how we should welcome it into the congregation,” says Cantor Paul Buch. “Should we put it in a display case, should we mount it on the wall? Rabbi Kaplan’s point of view was that it needed to be in the Aron Kodesh (the ark) because even though it may not be kosher, it had an equal or greater holiness and therefore needed the honored position.“

The Czech Torah quickly became an integral part of all the b’nai mitzvah services. “We talk about its history and each bar or bat mitzvah carries it through the sanctuary before switching to a kosher Torah scroll for reading,” says Rabbi Jonathan Kupetz. Because of its fragility, it’s opened for viewing only on special occasions such as the anniversary of its dedication.

As he and Cantor Buch explain, nearly everything about this scroll is unusual. The Czech scroll is the tallest scroll in the ark, yet it’s the lightest. The wooden rollers are very light, the parchment itself is thin enough to see your hand through, and the columns are very wide, so the scribe used fewer sheets of parchment. “But as far as we can tell, it is complete,” Buch says.

Rabbi Kupetz lifts the Czech Torah out to show the dedication plaque underneath and brushes off some black dusty bits. “The black is actually ink that comes off the scroll,” he grimaces.

He and Cantor Buch lay the huge scroll on top of the grand piano as gently as possible and unroll it. Inside, one parchment section is mostly sharp and clear, but the next one’s letters are faded hollow where the ink is cracking off, and some whole letters have disappeared, leaving yellow ghosts.

But restoring it to kosher status would have meant replacing nearly all of the original parchment, wiping out most of its character and history in the process. This Torah has further secrets to reveal.

Cantor Buch and Rabbi Kupetz quickly get caught up pointing out unusual features. It’s not a “vav” scroll–the modern Ashkenazi standard starts most columns with that letter—so it’s almost certainly over 100 years old. The columns are as wide as a sheet of typing paper. It’s too big to fit into a Sephardic Torah case and the letters are mostly standard Ashkenazi script, but many are missing their tagin or crowns, and others are genuinely odd.

In addition to the familiar stretched and compressed letters, some older scrolls contain otiyot l’fufot—curlicued nonstandard letters and decorations. Sometimes they identify a particular scribe, but more often they highlight a message or local tradition.

“The pehs with the peh inside of them are very common in Prague,” Rabbi Kupetz says as he points to a fancifully ornamented phrase, pakod pakadti. “It was a sign of mystical or kabbalistic understanding.”

But they only appear in select phrases. The scroll opens at the break between Genesis and Exodus, and just after, in Shemot 3:16, G-d instructs Moses to tell the Israelite elders that “I have taken notice” (pakod pakad’ti) of what is being done to his people in Egypt. At the end of Genesis, up at the top of the column, two more sets adorn the related phrase pakod yifkod, twice, as Joseph tells his brothers that G-d will take notice and redeem them out of Egypt, and to take his bones with them back to Israel. An old tradition links the two by inferring that Joseph repeated pakod yikod as a secret password by which the Israelites would recognize the person sent by G-d to deliver them from slavery.

Chairman Jeffrey Ohrenstein says the Trust doesn’t set the Czech scrolls to any particular passage, but that many congregations display passages like this or Amalek in reference to the communities destroyed in the Holocaust. At the Memorial Scrolls Trust, they found a note tucked into one scroll, “Please G-d help us in these troubled times.”

Susan Boyer, the Trust’s US curator, explains that in most places, the Nazis just destroyed Torah scrolls and ritual objects, but in Bohemia and Moravia, archivists from the Jewish Museum of Prague convinced someone in power to let them store and catalog these objects centrally. “I think in the early years the Czech Jewish community didn’t realize how bad it was going to get,” she says.

Jews were conscripted to record community names for each Torah, but their efforts to save the scrolls did not save their lives for long, and only two survived the camps. In Tábor, the desecrated Jewish cemetery became a park and the synagogue was a warehouse until 1977, when it was torn down for a parking lot with a memorial plaque. The scrolls sat abandoned for years.

In the early 1960s, the new Communist government, strapped for cash, tried to sell them to Israel, which refused, stating the Czechs should donate them as reparations. Then in 1963, London philanthropist Ralph Yablon bought all 1564 scrolls and brought them by train to the newly-formed Westminster Synagogue for safekeeping and restoration. The congregation formed the Trust and hired a sofer, David Brand, to inspect and repair the scrolls. It became his life’s work. Ruth Shaffer, a synagogue member, was the Trust’s archivist for over 40 years, and in her eighties she learned how to use a computer to update the catalog from index cards.

Shortly after TBI received its Czech Torah, Lawrence says she went back to England and met Mrs. Shaffer again. “She was thrilled to death that she had found the original wrapping for our Torah.” Even though it was only a shred of tallit, she says, “We brought it back on our persons, not in the suitcases!”

Since 1964, the Trust has distributed Torahs on permanent loan to communities worldwide, more than 1000 in the US and over 100 in Southern California. If a participant closes its doors, the scrolls must be returned, though, as Boyer and Ohrenstein point out, some communities have forgotten their scrolls’ origins after decades, and one actually brought theirs to Israel for burial. Today Boyer helps the Trust track them, connect participants online and give local communities more appreciation for the scrolls in their care. Don Bloch, who has also visited Westminster Synagogue, has represented TBI at two Czech Torah reunion events with other congregations at Leo Baeck Temple and the LA Holocaust Museum.

The loans carry one more responsibility, Lawrence says. “If a temple is ever erected in the town of Tábor, our Torah gets shipped back to them. I always say it would be my greatest pleasure to take it back.

Deborah Noble is a contributing writer for jlifesgpv.