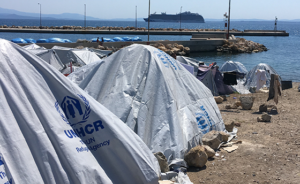 I’VE RECENTLY CONCLUDED my third trip this year to Chios, a dazzling Aegean island on which over 3,000 refugees now find themselves trapped in conditions described by international media as the worst in Greece. There I was accompanied by eight fellow members of the Southern California Jewish community, aged 18-76, who’d joined with me to volunteer with the Chios Eastern Shore Relief Team (CESRT), an international volunteer initiative. Our group shared a common humanitarian desire to face the crisis first-hand, hoping to make a difference for people who—until recently—could no more have imagined themselves as refugees than we could.

For Gail Dratch and Haley Broder, 22,  the trip represented their second tour volunteering in Greece. Carol Marr, a pediatric nurse, joined her cousin Gail. Sisters Lauren (21) and Rachel (18) Silverman, were first-time participants. Rabbi Miriyam Glazer and her husband Rabbi Anthony Elman learned about the volunteer opportunity through LA’s IKAR Refugee Support committee. Jacob Kagon, 20, also discovered the trip through IKAR which had helped connect me with would be volunteers.
Together with CESRT, we found ways to contribute in an atmosphere of crisis that can only be described as complete chaos. We acted as humanitarian first responders at refugee landings, taught English, staffed a children’s center, and provided tea and recreation for Souda camp residents. We distributed formula for infants, as well as clothing and other items for adults and children alike. We provided emergency assistance for refugees living on the streets, denied even the minimal shelter offered by the overcrowded camps; and we helped feed 600 at-risk Chios residents each week, in an effort organized by a delightful Greek-Orthodox priest.

Volunteering on the front-lines of the crisis is life-changing and transformative, but also difficult. Volunteers regularly witness traumatic events. Driving late one night, I encountered a young refugee carrying his older brother, who had just attempted suicide. I drove them to the hospital over six miles away.

Still, despite such challenges—or, perhaps, because of them—volunteers derive great personal meaning from their experience. Jacob tells me, “I met incredible people from Syria, Iraq, Somalia, Afghanistan, Yemen, Gaza, Morocco and more. I learned that a kid from Malibu and one from Aleppo can bond over shared love of [soccer team] Real Madrid. I learned who the refugees are, and most of them are just like us: they just want to live a normal life.”

Lauren explains her experience this way: “I’ve always felt a personal obligation to help [refugees]. I only hope that if my people were in a humanitarian crisis once again, the rest of the world would respond.” She continued, “Refugees are amazingly resourceful people. The best thing you can do is simply ask them if they need anything and when they don’t, just be a friend.”

The explosive conflicts and inevitable human fallout in today’s headlines are happening continents away. Yet this counrty is also home to hundreds of resettled families. Ask them and you’ll invariably find that along the way they received critical material and emotional support from volunteers like Lauren.

Volunteers defy the refugees’ unrelenting suffering to make a lasting impact, forming close friendships with one another in the process. Jacob, echoing the wisdom “You realize that you’re not going to end the crisis. But helping a few people makes a huge difference in their lives.”

Jackie Menter is a non-profit fundraiser , professional cellist, and activist on behalf of refugees. She travels to Greece volunteer in refugee camps, and continues to assist refugees from her home in Southern Callifornia. You can email JackieMenter@gmail.com with questions about how to support and volunteer with refugees locally or abroad.