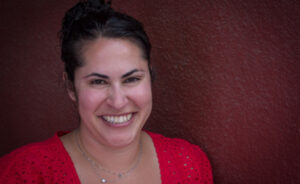 Rabbi Aimee Gerace was born and raised in the San Fernando Valley before going on to study Jewish Studies and Spanish at Tulane. Coming from a family of educators, Gerace knew she wanted a life in education. After earning her undergraduate degree in – and in the process, falling in love with – New Orleans, she went on to be ordained at Hebrew Union College. When asked what led to her to become a Rabbi, she explained that she wanted the background and credentials to show people how Judaism can be “a great framework for living an everyday 21st century life.”

As Education Director at Pasadena Jewish Temple and Center, Gerace works closely with the clergy and other professional staff to provide a meaningful, warm, and relevant Jewish education experience for children between pre-K and 7th grade. Her ultimate goal is “for children to see themselves as lifelong learners.”

In January, the Pasadena Jewish Temple and Center will be putting together a B’nai Mitzvah Information Experience, in which families will be able to visit and experience a mock-Shabbat morning service.

Originally from New York, Florence Dann received her Bachelor’s Degree in English from Brooklyn College. After teaching English for several years, she entered the world of educational publishing, later moving to California to write and produce educational videos and collateral materials. As an active member of University Synagogue in Irvine, Florence taught in Religious School and sung in the choir during High Holy Day services. She served as Vice President of the West Coast Region of the Jewish Reconstructionist Federation.  Florence is the recipient of the JRF Ira Eisenstein’s Service award.

As Director of Beit Sefer [Temple Beth Israel’s religious school] Rabbi Florence is responsible for developing the curriculum, hiring and guiding the teachers and working with the parents as well. All aspects of education for K-7 are her responsibility, and of course working with the Cantor to help prepare students to become bar or bat mitzvah.

On October 1st, Temple Beth Israel is having a Sukkah building and decorating event for families and any members who wish to attend. The following Wednesday there will be a dinner in the sukkah followed by a special service.
Gal Kessler Rohs

Gal Kessler Rohs was born in Israel before moving with her family to England at age ten. She spent her developmental years in Israel, which made leaving the Jewish state especially hard. After earning her Bachelor’s degree from Tel Aviv University she achieved a Master’s in Education from Columbia. Rohs eventually made her way to California and became the Parenting Program Developer and Early Childhood Religious School Teacher at the Pasadena Jewish Temple and Center before moving to her new position at Temple Beth David.

As the Education Director at Temple Beth David, Rohs sees her goal as fostering a strong Jewish identity in children. She also strives to facilitate the social-emotional growth of her students, facilitating them to “take one step out of the ‘me, myself and I” and achieve healthy relationships with “the immediate other,” being friends and family, as well as the larger community.
Upcoming Events
at Temple Beth David

On November 8th, Temple Beth David will host a Jewish Federation Book Festival event, which will feature a discussion about author Stanley Ginsburg, The Rye Baker: Classic Breads from Europe and America. The book presents a comprehensive history of bread in an easily digestible (haha!) form. The discussion will be accompanied by a sampling of traditional breads.

Perry Fein is a contributing writer and editor to JLife SGPV.