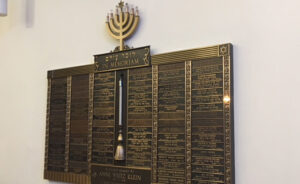 With the hundreds of names carefully etched in gold on beautiful black plaques, the memorial board at Beth Shalom of Whittier is a site to behold—it stretches more than 24 feet.
For the synagogue’s members, past and present, the board is a sentimental landmark paying tribute to the congregation’s history.
It’s been there since the synagogue opened its doors more than 60 years ago. But now congregation leaders are going to have to take it down. It’s a difficult but necessary part of their next step — leaving the building they’ve known in order to keep the congregation alive.
“It’s heartbreaking just to look at it and realize we are not going to be here after all this time, because for most of us we’ve been here most of our lives,” said Lila Held, president of Beth Shalom’s board of directors. “It’s very traumatic honestly.”
Beth Shalom of Whittier opened its doors in 1955, and at its peak boasted more than 400 member families. Now, with less than 50, the congregation has had to make the difficult choice to sell the building and move in order to keep the synagogue afloat.
“Our membership has been declining,” Held said. “A few years ago we had to make a decision as to what we were going to do. We were not bringing in money to keep us going.”

With the sale of the building, the congregation now has enough to keep them going for a while. They’ll soon be moving into an interim space at First Friends of Whittier church while they look for a building to lease.
Though the situation isn’t ideal, Held said she’s happy that the congregation will be able to stay together and the synagogue won’t have to close completely.
She said they’re trying to make the new location feel as much like home as possible. Many of the member families have been coming to the synagogue for multiple generations.
“While we are doing as much as we can to bring as many familiar things as we can with us we just can’t bring the whole building,” Held said. “It’s so emotional.”
Held attributes the declining membership to a demographic shift in the area, and the temple’s existing members aging. The Jewish community has been moving out of Whittier. Jason Moss, executive director of the Jewish Federation of the Greater San Gabriel and Pomona Valleys, said he has seen many move further out, into the Inland Empire and other more affordable areas.
“Their demographics have shifted dramatically,” Moss said. “Before there was a nice sized Jewish community in that area and as time has passed, younger people are not moving into Whittier the same way they are into other communities.”
And, of course, there’s the issue of attracting younger members to join, a problem many other synagogues are also facing.
“I think people are finding different ways to engage Jewishly than what was traditionally done through synagogues,” Moss said.

Synagogues are having to find other ways to involve people, he added, noting the Jewish Federation’s success with the PJ Library program as an example.

Held said Beth Shalom plans to create a more modern experience to get interest from young families in the area.

“The first priority is to give the people who have supported the synagogue for as long as they have a place to go so they don’t have to gout in their 80s and 90s and look for a new place,” Held said. “A strong second is we do want to push to be more modern, do more advertising on social media, trying to get out to younger people and network and try to let them know we are here.”

“I am very happy they have gone through the process they have, because I think that if we were to lose a synagogue as a whole it would be a loss to the community,” Moss said. “A synagogue is not just a building, it’s the people that make up the community.”

LAUREN GOLD IS A CONTRIBUTING WRITER TO JLIFE MAGAZINE.

What’s in a name?