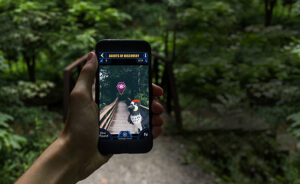 OCTOBER’S THEME OF Welcoming the New Fall Season inspired me to reach out to Mary Clark, CEO of Agents of Discovery to find out how, with autumn’s arrival, parents and children could seamlessly switch from pools to parks. Clark’s company, “an educational technology platform that facilitates the gamification of information,” is a mobile gaming app designed to get kids enthusiastic about exploring nature’s wonders. With Agents of Discovery and their SoCal Explorer Campaign, the infinite pleasures of the great outdoors are just waiting to be enjoyed.

How long has the Agents of Discovery app been around and what influenced its creation?
We created Agents of Discovery in 2015 in response to the wave of evidence supporting the capacity of game-based learning to incentivize activity, engagement, and discovery.
You’ve corraled nine wonderful and impressive partners for the app including the City of Los Angeles Department of Recreation and Parks, the U.S. Forest Service, and Western National Parks Association. What kinds of activities or sights can the young explorers expect to encounter at these various locations during their Missions?
You mentioned that we’ve got some great partners, and we couldn’t agree more. As part of the SoCal Explorer Campaign, our nine partners have created fantastic site-specific Missions at 19 parks across Southern California. Kids assume the exciting role of an Agent on a Mission as they immerse themselves in nature. At Ken Malloy Harbor Regional Park, for example, kids learn about the park’s role in water stewardship as they explore the avian diversity in the area.
Please describe a sample mission explaining exactly what children using the app will be doing.
Kids become “Agents” on a “Mission” as they explore the park. The Challenges (questions) are geo-triggered so kids have to move in order to get to the questions. The questions are created by the park interpreters so they’re specific to each park’s ecosystem. Challenge types range from image multiple choice to detective sound matcher (match the bird with their specific sound), augmented reality catch and scavenger hunt, memory match and much more. Here are some sample questions from Griffith Park’s Mission:
– Multiple Image Choice: Which of these is the Griffith Park Ranger hat?
– Multiple Choice: There is a mountain lion named P22 in the park. He is sometimes seen but is wild and mostly avoids people. What are some other names for mountain lions?
What are your thoughts about using technology and electronics to get kids out of the house and into nature?
The way kids use technology is continually evolving, and I think that it makes sense to connect them with important historical, ecological, and STEM-based content in a way that resonates with them. It’s also important that we have conversations with our children around using technology in a mindful and productive way.
What age range is appropriate for the app?
The app is primarily meant for kids ages 6-15 years, with kids on the young end of that spectrum usually needing a little direction from their parents or teachers. We’ve also received enthusiastic feedback from families that have completed Missions; it’s an excellent way to explore a park together!
Do the young park explorers whom the app calls “Agents” engage alone or with parents, and must adults be technologically adept?
The app is extremely user-friendly, and kids tend to be pretty technologically adept these days! The app is built to appeal to a wide age range, and so younger Agents tend to need a bit more support.
What incentives does the app reward participants with?
We currently have fun digital and embroidered badges, as well as beach balls, backpacks, and day passes to Lake Perris.
The SoCal Explorer Campaign runs until December 31. Can the app still be used after the campaign ends?
Together with our partners, we created the SoCal Explorer Campaign as a fun way to generate awareness and build excitement around all the excellent Missions in parks across Southern California. The Missions will still be live after the campaign ends, although parks often change their Missions regularly to keep them fresh for returning park visitors. The content of Missions can vary based on events and seasons. At the end of the SoCal campaign, Agents will no longer be able to earn badges and prizes.
Where else has Agents of Discovery been used around the country or world?
Agents of Discovery has partners across North America, as well as a few in the UK. The great thing about our platform is that it’s highly flexible and really easy to use for educators or anyone interested in imparting knowledge. We currently offer the app in Spanish and text-to-speech for the visually impaired.
Is there anything you’d like to add about this outdoor oriented initiative?
Young people are the future of our public lands, and the more time they spend in our parks and historic sites, the more they’ll be called to value and protect them. More than anything else, we want kids to leave parks engaged and excited to return, so get outside and start exploring!
I’d also like to add that Agents of Discovery is completely free and importantly for parents, doesn’t contain any in-app purchases or advertisements. Agents and their parents can download the app and Missions on Google Play or the app store. Since most sites do not have WiFi, download the app and Mission before you head out. Once downloaded, the app does not require any data or WiFi to run.
With over 150 Missions across North America, agentsofdiscovery.com is sure to have a Misson in your area. Check out the map on their website to find a Mission near you. Participating parks here in SoCal include: El Cariso Trail, San Juan Loop Trail, Cabrillo Beach, Ken Malloy Harbor Regional Park, South Los Angeles Wetlands Park, Kenneth Hahn State Recreation Area, Stoneview, El Pueblo de Los Angeles Historical Monument, Griffith Park, Echo Park Lake, Reseda Park, Hansen Dam Recreation Center, Vogel Flat, Eaton Canyon, Chilao, Grassy Hollow, Santa Rosa Plateau Ecological Reserve, Lake Perris, and City of Carson.

Ronna Mandel is a contributing writer to JLife. You can find her blog at goodreadswithronna.com.