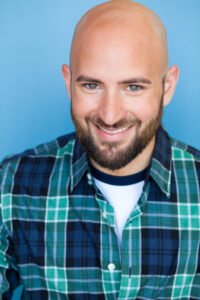 If you by mistake, change the first “s” in Mesches to an “n”, you get Menches and then remove the “es” at the end, you get the word Mensch, probably one of the most oft used Yiddish words in the popular vernacular and you get the most apt description of the phenome who will rock our family Hanukkah concert on Wednesday evening, December 1. You may recognize him; Jason Mesches has twice entertained our community at Monrovia’s Library Park. A whirlwind of energy, excitement and enthusiasm, Mesches’ unadulterated passion for music and its ability to connect with people, is his life’s driving force.
He is proud of his New Jersey roots and credits Jewish summer camp with the formation of his love for Judaism, his creativity and all things music. His association with the URJ camping movement from ages 9-20 is a source of great pride for Mesches. “Jewish summer camp is where I learned how to be a leader.”  He spent his college years at Syracuse University where he was a Musical Theater major. Later he joined the Screen Actor’s Guild and had bit parts in several television sitcoms. When that work hit a downturn Jason showed up at Wilshire Boulevard Temple where his youth and energy garnered him a job where none existed before. He became the tour guide for the students of the Religious School for the museum-like setting of this historical structure. His success at engaging his students led to a 12 year stint as the Song Leader for every class of students that entered the doors. As a matter of fact he was the only member of the staff to work with kids ages 6 months to 18 years. Jason calls it a “Happy accident that shaped the rest of his life.”
After resigning from WBT last year, Jason has been touring nationally with his music. He teaches a daily Parent and Me Music Class called Jason Mesches Music, for which there is a waitlist well into March. He says he really loves what he does. “We have a responsibility to not dumb things down for kids. They are more capable than we give them credit for!”
If you have seen Jason on stage you would not be surprised by the fact that Elvis Presley was one of his most profound influences. Jason’s gyrating hip movements and pulsating guitar playing are modeled after this icon. On the other end of the spectrum, 1920’s American Jazz play a huge role in how Jason writes his own music. The educator in Jason, sees his work as a “…beautiful opportunity to instill Jewish values, share them with families and help parents re-fall in love with Judaism.”
Join us for A Rockin’ Bright 4th Night of Hanukkah Family Concert on Zoom featuring Jason Mesches, on Wednesday, December 1 at 5 pm. Sign up by November 10 and you will receive a special concert surprise in the mail.

Debby Singer is the PJ Library and PJ Our Way Program Director and a contributing writer to Jlife magazine.

Stocking up for the Holidays