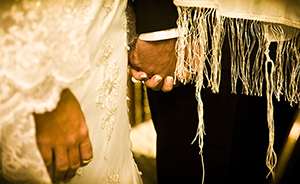 VERY FEW AMERICAN Jews marry before they finish college. And even high school sweethearts are usually prepared to wait–or are convinced by their parents to do so–until they turn 21. In Israel, with university coming after a lengthy post-high school period (including army service, travel, making up for screw-ups in high school, and then studying for and taking the university entrance examination), a matriculating bachelor’s student is typically in their mid to late twenties. Obviously, teenagers aren’t going to be expected to wait that long, and this is especially true in the national religious community, with very conservative sexual mores the ideal. Whereas in America the only Jews getting married at 21 or younger are ultra orthodox, here in Israel if a national religious couple is in love by their late teens, you can’t exactly tell them to wait until they finish college.
Not all couples who marry young have known each other for very long. Because national-religious culture is accepting of early marriages, a pair of 19-year-olds who both feel ready to take the plunge might reach this decision after having known each other for just a few months. Often what binds the pair is their religious commitment and not necessarily a sense that they are each the other’s bashert. As long as this religious commitment remains in place (and for most people it does), these marriages are successful. This being the case, I suggested to my friend Rabbi Lior Engelman, who himself married at 19 when his wife was 18, that perhaps the national religious community should adopt a system of arranged marriages just like the ultra orthodox. Such a system would solve a growing problem for the national religious: Alongside those who marry young are those who find themselves single as they approach–and sometimes pass–the age of 30. Rabbi Lior said that not every young person is ready for the demands of married life, which often need to be juggled with parenthood (the sector’s conservatism extends to birth control), army service, work and university studies. So there went that idea.
Coincidentally, a few days after my conversation with Rabbi Lior, my former study partner, a Karlin-Stolin hassid, closed the deal on a shiduch for his 18-year-old son. Before the arrangement was finalized, his son met with the girl twice (the “extra” second meeting was held at the young woman’s request—apparently at the first meeting the boy hardly uttered a word). At the “l’chayim” held to toast the couple, the new chosson was asked if he was worried. He said “no” because he does whatever his mother tells him to do. He did however ask to be reminded of the bride’s name.
Sarah and I have five marriageable children, ranging in age from 22 to 29. I am happy to say that Elie, our youngest child, became engaged to Hadar Arpeh in December; the wedding date is set for March 26. Not coincidentally, Elie is our most traditionally religious child (he and Hadar believe in complete physical abstinence before marriage). Elie is still doing his mandatory military service, but there are already three other religious young men in his elite combat unit who have married. Once Elie has broken the ice/glass(!), his siblings will hopefully not be too far behind. Mazal Tov!

Teddy Weinberger, Ph.D., is Director of Development for a consulting company called Meaningful. He made aliyah with his family in 1997 from Miami, where he was an assistant professor of religious studies. Teddy and his wife, Sarah Jane Ross, have five children.