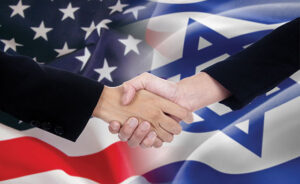 Donald Trump’s stunning Presidential victory—coupled with the Republican Party retaining control of the Congress—presents Trump with the opportunity to restore America’s tarnished reputation and integrity by affirming he will honor the commitments made to Israel by President Bush in his letter dated 14 April 2004—overwhelmingly endorsed by the then Congress by 502 votes to 12.

Those Bush-Congress commitments were seriously undermined by President Obama and his two Secretaries of State—Hillary Clinton and John Kerry—just one of many American disastrous policy failures in the Middle East during Obama’s term of office.

The Bush-Congress Commitments were crucial to:

• Israel’s unilateral, unconditional and complete disengagement from Gaza in 2005 and

• Israel’s agreement to resume negotiations with the Palestinian Authority as publicly declared by Israel’s then Prime Minister Ehud Olmert at the international conference called by President Bush in Annapolis in 2007.

“In the course of the negotiations, we will use previous agreements as a point of departure. U.N.  Security Council Resolutions 242 and 338, the road map, and the letter of President Bush to the Prime Minister of Israel dated April 14, 2004.”

Israel has expressed concern that President Obama and current Secretary of State John Kerry might be planning to further undercut the following Bush Commitment at the United Nations or in the international arena during the period leading up to Trump and the new Congress being installed into power on 20 January 2017.

“… the United States remains committed to my vision and to its implementation as described in the roadmap. The United States will do its utmost to prevent any attempt by anyone to impose any other plan,”

Obama and Kerry have not leapt to defend Israel’s refusal to take part in an international conference currently being planned by France in December—designed to depart from the clear negotiating guidelines laid down in the Bush Roadmap and Bush’s 2004 letter—as subsequently clarified at the Annapolis Conference.

Obama has remained mum on using America’s power of veto at the the UN Security Council to resist any efforts to depart from the terms of the Bush Roadmap or substitute some different negotiating process outside the Roadmap and the Bush-Congress endorsed commitments.

President-elect Trump made his views clearly known on America upholding commitments to its allies during the election campaign:

”… your friends need to know that you will stick by the agreements that you have with them. You’ve made that agreement, you have to stand by it and the world will be a better place.”

Senator Marco Rubio – who unsuccessfully challenged Trump for Republican Party Presidential nominee but who has now been reelected to the Senate for a further term by a large majority, pledged during that campaign:

“I will revive the common-sense understandings reached in the 2004 Bush-Sharon letter and build on them to help ensure Israel has defensible borders,”

Trump has been withering in his criticism of Obama’s conduct toward Israel:

“Israel, our great friend and the one true democracy in the Middle East has been snubbed and criticized by an administration that lacks moral clarity.”

Moral clarity demands that Trump immediately inform Obama that no action should be undertaken by Obama between now and January that would in any way depart from or undermine the  commitments made by former President George Bush and the Congress to Israel in 2004.

Trump also needs to unequivocally state that his Administration intends to fully uphold those Bush-Congress commitments.

Draining the swamp and making America great again will be given a huge impetus if Trump makes these policy declarations without obfuscation or delay.

David Singer is a contributing writer to Jlife magazine.

Two States are Not a Solution