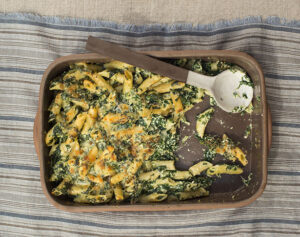 WHAT LAKTES ARE to Hanukkah, what honey cake is to Rosh Hashanah, what matzoh – and all its permutations – is to Pesach, so is cheesecake to Shavuot.

“It is no coincidence that we like dairy foods for Shavuot, which falls during the micro season of May-June,” notes Amelia Saltsman, author of “The Seasonal Jewish Kitchen” (Sterling Epicure, $29.95). “That two-month window is also the time when milk is especially plentiful after the spring calving. Milk tastes more like spring at this time when goats, cows and sheep are all grazing on green grasses rather then dry hay.”

While we know it as the holiday that celebrates the giving of the Torah at Mount Sinai, Shavuot is the time to focus on fresh cheeses, she says. “We can’t all have access to fresh milk from the dairy, but we can certainly focus on fresh cheese, like ricotta, fresh mozzarella – the kind that comes in water – and fresh goat cheese, not long-aged cheeses, but fresh, bright cheese, which is perfect for this time of year for some sort of cheese tray. Goat cheese, chèvre, ricotta and cow’s milk mozzarella or even burrata – these creamy flavors are perfect for Shavuot, and you can pair them with either a sweet accompaniment or savory.”

Pair ricotta or chèvre with California cherries, Saltsman suggests. “It is not coincidental in California – which is not a big cherry producer – that our cherry season is May and June. Pair cherries with ricotta and maybe a little honey, perfect for the holiday as symbolically honey is placed on a child’s tongue at this time as an introduction to the Torah. Add some black pepper, because pepper and mild cheese and cherries are great accents, or even balsamic vinegar, which is very Italian.

“Serve some crusty bread or little toasts, and guests can schmear it themselves, kind of like a deconstructed cheese blintz. The quintessential foods for Shavuot are cheesecake, blintzes and kugel. That’s a lot of work, but you can certainly come up with these kinds of pairings.”

For savory pairings Saltsman suggests ricotta with a fabulous olive oil, pesto or even marinated sundried tomatoes. “Or try ricotta with maybe pistachios on the side or asparagus, snap peas, lemon zest – things of late spring with their bright colors.”

Spinach too is at the peak of the season at this time, she notes, and is a key ingredient of the Pashtida featured here. “Pashtida Is the Israeli word for a noodle or egg casserole. The most popular are dairy-based and served during Shavuot. Today Israeli pashtidot are typically crustless, and every cook has a few handy recipes up his or her sleeve.”

All this talk of fresh cheese and honey pairings brings to mind my favorite pairing of all with fresh Black Mission Figs, so no wonder I’m drawn to the Sweet Cheese and Fig Strudel from “Little Book of Jewish Appetizers,” a darling new collection of 25 unique appetizers by Leah Koenig (Chronicle, $18.95). If you’re like me, I sometimes prefer these little palate teasers to the main course. “They are like the comedian who warms up the crowd before the featured act and ends up stealing the show,” she writes.

“For centuries strudel was considered the national dish of the Austro-Hungarian Empire, and it continues to maintain its powerful hold over Central European palates today,” Koenig explains. “Enjoyed by the wealthy and humble classes alike, the process of hand stretching the dough to impossible thinness, then rolling it with sweet (apple, cherry, poppy seed) or savory (cabbage, mushroom, potato) fillings became a regional art form. According to Gil Marks’s Encyclopedia of Jewish Food, ‘The ultimate quality of the housewife’s culinary skills was judged by her ability to make strudel ausgezogen (pulled by hand).’

“While not difficult to make, this dish takes a bit of advanced planning. But the combination of cinnamon-perfumed cheese and wine and honey-poached figs encased in crackly, butter-rich phyllo makes it undeniably worth the effort. Serve the strudel as is or with a dollop of sour cream and an extra drizzle of honey.”

2 Wash spinach well; drain but do not dry. Stem spinach. Heat wide pot over medium heat; swirl in 1 tablespoon of the butter. Working in batches if necessary, add spinach, season with salt and pepper, and cook until spinach has wilted and released its liquid, 2 to 3 minutes. Transfer to sieve and drain, pressing out as much liquid as possible. Finely chop spinach. You should have about 1½ cups.

4 Heat remaining ½ cup of butter in medium skillet over medium heat and cook, swirling pan occasionally, until foam has subsided and butter is fragrant and nut brown, 7 to 10 minutes. Lower heat as necessary to keep milk solids from burning. Stir half the browned butter into spinach mixture.

5 Just before pasta is ready, scoop out about ½ cup of the cooking water and reserve. Loosely drain pasta and return to pot. Add spinach mixture and pasta water and mix well. Scrape into prepared baking dish, top with remaining Parmigiano-Reggiano, and pour remaining browned butter evenly over top. (Dish can be prepared to this point and refrigerated several hours.)

6 Bake casserole until top is golden brown, about 30 minutes. (If baking a cold casserole, allow extra 10 minutes or so in oven.) Serve hot.
Source: “The Seasonal Jewish Kitchen” by Amelia Saltsman
Sweet Cheese and Fig Strudel

1 Spoon ricotta into center of clean dish towel; squeeze out as much liquid as possible. Transfer to bowl; Stir in cream cheese, egg yolk, sugar, vanilla, cinnamon, and salt until smooth. Refrigerate.

4 Melt butter. Lay piece of parchment paper on flat surface and place one piece of phyllo on top. (Cover remaining phyllo with damp dishtowels so they do not dry out.) Using pastry brush, brush sheet of phyllo all over with thin layer of melted butter. Top with another sheet of phyllo and brush with butter; continue until you have a stack of 8 sheets of buttered phyllo. Reserve remaining 8 sheets.

5 Spoon half the cheese mixture in a thick line along a short end of phyllo stack leaving about ½ inch along edge. Layer half the fig mixture on top of cheese mixture. Use parchment paper to help roll dough around filling, tucking filling inside and ending up with long, stuffed cylinder. Brush top with more melted butter; carefully transfer to prepared baking sheet. Repeat with remaining 8 sheets and butter, and remaining cheese and fig mixtures.

6 Bake until golden, 20 to 30 minutes. Let cool. Use serrated knife to cut into thick slices. Serve at room temperature.

Source: “Little Book of Jewish Appetizers” by Leah Koenig
Jlife Food Editor Judy Bart Kancigor is the author of “Cooking Jewish” (Workman) and “The Perfect Passover Cookbook” (an e-book short from Workman), a columnist and feature writer for the Orange County Register and other publications and can be found on the web at www.cookingjewish.com.