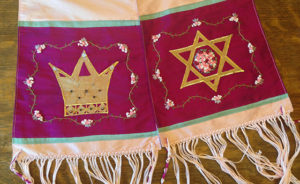 WHEN LINDA ROURMAN, took up needlework at the suggestion of a friend from her choir nearly thirty years ago, she never imagined that she’d become an expert at making tallitot. This month her impressive body of work is being honored with an exhibition at the offices of the Jewish Federation of the Greater San Gabriel and Pomona Valleys. For Rourman, it marks a milestone in a career that’s brought happiness to dozens of families through beautiful, custom prayer garments.

“It used to take me a couple of weeks to embroider the full blessing for putting on the tallit, but it only takes me about three or four days now, because I know it by heart,” Rourman said, flipping through an album of her tallitot in her home in Temple City. “I’ve probably made close to two hundred tallises over the last twenty years, maybe more.”

“It’s extremely personal,” Rourman said, discussing the process of creating a tallis for a client. “If it’s just a plain tallis with just the blessing on the neck and no embroidery on the corners, it can take me about two weeks to do the whole business,” Rourman said. “The elaborate ones… these can take probably a couple of months… because it also takes a tremendous amount of thought.”

Unlike many artists, who create works based on their own desires and preferences, Rourman often works for a client who has their own wants and needs. “I do my best work, whether I agree with what they want or not,” Rourman said. She draws the line at creating a tallis that’s in poor taste, and cringes when a Bar Mitzvah boy asks for a sports theme, but beyond the blasphemous, Rourman is open to most ideas. There was the tallis with a space theme that she made for a graduate student studying physics, and the tallis she made for a Bar Mitzvah boy who insisted upon having a black bird incorporated into his design.

“It’s very fulfilling, it’s very meaningful,” Rourman said. Crafting tallitot is something of a religious experience for her. “It’s really important to me to feel the spirituality going into it.”

Rourman doesn’t do the work for the money. “I’m never going to get rich doing this,” she said. “I can’t charge what it would cost by the hour… otherwise if I charged what it’s really worth, they’d be paying thousands and thousands of dollars, and I can’t do that conscionably.” Rather, Rourman does it for the reactions of the people who ask her to make them a special garment. “To get to see it in person – I live for that when they go, “oh, look at that!” The happiness of her customers has sustained her both through constant new work, and gratitude.

Rourman belongs to a group called the Pomegranate Guild which was founded, in Rourman’s words “for the purpose of teaching people to make new (Jewish) family heirlooms.” It was through the Guild that Rourman first learned to do the needlepoint techniques that she has now mastered. “I’ve become an expert in silk ribbon and in blackwork, so that when Pomegranate Guild has conventions, they always hire me to teach those classes.”

Rourman’s even “gone into a side business of restoring and repairing Torah covers.” She’s done work on multiple pieces. “I’ve done repair work on all different kinds of Judaica,” Rourman said. Much of that work has come through her local chapter of the Pomegranate Guild. “They always have something going on, always a project to handle.”

The idea for Rourman to display her work came from one of her old customers, Cantor Judy Sofer, the Cultural Arts Program Coordinator at the Jewish Federation. “Judy Sofer is one of the most amazing people I’ve known in my entire life,” Rourman said. “She’d been bugging me for a long time, she wanted me to bring my Tallises to be artist-of-the-month (at the Jewish Federation).” Rourman resisted a little at first, but finally relented.

The task of gathering her best tallitot for the exhibition wasn’t always easy. Some of her clients had moved away, and it wasn’t always possible to find some of her favorite works, but in the end, she put together a near-dozen pieces she was proud to hang. There are even three tallitot that are part of the exhibition that are for sale to the public.

“I’m shuddering to think if people touch them,” Rourman admitted. Though she also acknowledges that “It’s nice to be honored.”

Rourman remains grateful for the career that’s brought such joy to the latter part of her life. “I know this sounds really corny,” Rourman said, “but it’s an absolutely fact for me – when I’m sitting and doing the embroidery, I’m thinking about the customer the whole time. I’m thinking about the religious experience they’ll go through, whether it’s an adult or a child.” That’s what makes her smile.

Jonathan Maseng’s work has appeared in LA Weekly, The Press Enterprise, The Jewish Journal, and the Jerusalem Post. He also writes regularly about the New York Mets for SB Nation’s Amazin’ Avenue.