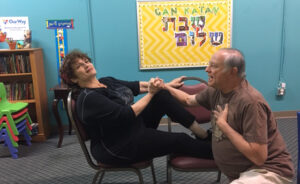 Mistaken identity. Jealousy. Confusion. Laughs. In October, Jewish Federation’s JFed Players will present “Lend Me a Tenor,” a farce by Ken Ludwig, directed by Joanne Karr, which includes all these elements, as well as slamming doors, costumes and a little opera music. Despite the title and premise, our version of Lend Me a Tenor is not a musical, although the action focuses on a self-absorbed opera singer.
It is 1934, Cleveland. The Cleveland Grand Opera Company has invited the great Tito Merelli to guest star in their fundraiser, a performance of Pagliacci. Max, assistant to the opera company manager, is an aspiring opera singer himself and the fiancé of the company manager’s daughter. Tito is given an extra-large dose of sleeping pills in an attempt to relax him before the performance. When he does not wake up to go to the theatre, insanity ensues. Someone MUST go on in his place, after all, $50,000 worth of tickets have been sold (that would be about $950,000 in 2019). It should be easy. The audience WANTS to see the great Tito Merelli they want to brag about having seen him, and because the character of Pagliacci is played in traditional white clown face and costume, who will know if Merelli is really behind the makeup?.
The play has wonderful ironic parallels—Tito’s wife is the jealous type and so is the character Tito plays in the opera. An analysis could be written about the use of suspension of disbelief that goes on in the theatre which allows an audience to truly believe what happens on stage. But who cares?!? What Ken Ludwig really wants the audience to do is laugh, which they do as these characters—who also include a singing bellhop and an extremely ambitious opera diva—run in and out of the multiple doors of the elegant hotel suite where the play takes place.
Author Ken Ludwig, himself the son of a doctor and a former Broadway showgirl, developed a love for the theatre at a young age. He earned a music degree at Haverford College, and then went on to obtain a law degree at Harvard. Even as he worked his way toward a legal career, it was the stage that drew him. While studying at Harvard Law School, he joined a master class in music composition taught by Leonard Bernstein. Lend Me a Tenor, his first Broadway play, which Frank Rich of the New York Times called “one of the two great farces by a living writer,” won three Tony Awards and four Drama Desk Awards. It ran 500 performances on Broadway in 1989-1990. The revival in 2010 played another 150 plus performances. Ludwig’s work has been performed in more than 30 countries in over 20 languages. He’s written close to 30 plays, six of which have had Broadway runs and seven of which have had London West End runs. If you are a fan of musicals, you may know he wrote Crazy for You. If you are into Shakespeare, you may have read his book, How to Teach Your Children Shakespeare. And if you are an Agatha Christie fan, you may have seen his stage adaptation of Murder on the Orient Express, written specifically at the request of the Agatha Christie estate.
“There’s something in comedy that deeply pleases us,” says Ludwig. “A shared humanity, perhaps.” Come and see this rib-tickling farce, guaranteed to keep you laughing throughout the performance!
“Lend Me a Tenor” opens on Saturday, October 19 at 8:00 pm at Porticos Art Space.
Our cast:
Max………Jacob Bash
Maggie……Hannah Levin
Saunders…..John Carlton
Tito…….. Neil Brown
Maria………Idrea Lippman
Bellhop……..Michael DiRosa
Diana………Wendy Friedman
Julia………..Lori McKenna
You can find more information regarding the play and a link to purchase your tickets on www.jewishsgpv.org.
The JFed Players are excited to announce SEASON TICKETS! For the first time in JFed’s history, it is offering a season ticket package which includes tickets for the Fall production of Lend Me A Tenor, opening on Saturday, Oct. 19, its Spring Production of A Little Night Music by Stephen Sondheim, opening in May and the Festival of Jewish Music, the annual celebration of music featuring Kol HaEmek Community Chorale and the Jewish Youth Orchestra, Sunday, Dec. 15. Please visit www.jewishsgpv.org for details. You can also follow the JFed Players on Facebook and Instagram.