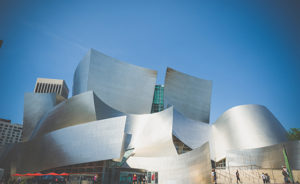 Jewish sleepaway camp has been a summer ritual for millions of American Jews across the 20th and 21st centuries – but as adults we sometimes struggle to find ways to connect Jewishly during the summer in the same way. That’s why we’ve put together a handy list of ten ways to connect with your Jewish side this summer. From sports to the symphony, we’ve got you covered from Los Angeles to Claremont.

1. Catch Indecent at the Ahmanson Theater in its final week.
Pulitzer Prize winner Laura Vogel’s Tony-Award-winning play Indecent is now in the final week of its run at the Ahmanson Theater. Indecent tells the true story of a censorship scandal that plagued the Broadway production of Sholem Asch’s play God of Vengeance, whose story about a Jewish brothel owner trying to marry off his daughter led to obscenity charges against the cast and producers. So run out and grab tickets before it leaves town next weekend.

2. Grab some Dodger Dogs at Jewish Community Day
Sunday, July 7, marks the extremely popular annual Dodgers Jewish Community Day. Head out to Chavez Ravine to see some baseball and celebrate Jewish culture. There’s even a special ticket package that will net you an exclusive Dodgers kippah.

4. Take in the LA Jewish Symphony at Disney Hall
LA’s own Jewish Symphony will be participating in a special program this August at Disney Hall. The program, called Friendship and Harmony will see the LAJS partner with the Los Angeles Korean-American Musicians Association and the AJU Choir for a performance of Grammy Award winner Lucas Richman’s newest piece “Symphony: This Will Be Our Reply.” For more information visit www.lajewishsymphony.com.

5. Audition for the JFed Players
The JFed Players will be holding auditions at the end of July for their newest production: Ken Ludwig’s Lend Me a Tenor. The comedic play tells the story of a production of Verdi’s Otello that suffers from Murphy’s Law, as everything that could go wrong does go wrong. Those interested in auditioning should keep their eyes peeled to www.jewishsgpv.org for more details. Cantor Judy Sofer, who runs the Players, also runs Kol HaEmek, the Jewish community choir, which will begin fall rehearsals on August 21st and the Jewish Youth Orchestra, which is looking for more kids to join. She can be reached at jsofer@jewishsgpv.org.

6. Fashion lovers can check out the new Rudy Gernreich exhibition at the Skirball
The Skirball Cultural center is currently hosting an exhibition that looks back at the career of Rudy Gernreich, a Jewish refugee who fled Nazi persecution in Vienna and came to America, where he pioneered everything from women’s pantsuits to the monokini. The exhibition, which features over eighty of Gernreich’s ensembles is open now through September 1st.

7. Visit the Newly-Michelin-Recommended Langer’s Deli
Langer’s Deli has been a Los Angeles institution since the 1940’s, but it only recently was named to the prestigious Michelin Guide’s Bib Gourmand list of affordable restaurants with high quality meals. As if you needed any more reason to chow down on some of the best Pastrami this side of Montreal – maybe now’s the time to get your fix in.

8. Get out and Volunteer
Is there any better way to get involved Jewishly than by engaging in Tikkun Olam? There are a number of great organizations looking for volunteers this summer. Project Angel Food, the LA Opera League, and the City of Pasadena are just a few of the places with volunteer positions open. You can also contact the Jewish Federation who will be happy to help refer you to organizations that need help.

9. Check out the many concerts with bold Jewish names in the Pasadena POPS summer series
This summer’s Pasadena POPS schedule is chock full of concerts with Jewish themes. On July 13, Michael Feinstein will conduct an evening called Rhapsody in Blue which is described as “The Gershwin Era meets the energy and excitement of the Jazz Age.” On August 3, Feinstein will step behind the microphone to sing selections from Cole Porter, and on September 4, Feinstein will conduct an evening of MGM Movie Classics that will particularly highlight the Wizard of Oz on its 80th anniversary. The Wizard of Oz’s music was, of course, composed by the very Jewish team of Harold Arlen (son of a cantor), and Yip Harburg, who grew up speaking Yiddish.

10. Celebrate Shabbat
It may seem like a no-brainer, but summer is a wonderful time to get out an celebrate Shabbat. Whether you host a dinner outdoor and under the stars, head to synagogue, or just take a day of rest and relaxation, celebrating Shabbat is a wonderful way to connect Jewishly this summer. The Jewish Federation calendar has a great listing of services around the SGPV, and if you’re a younger person, the organization OneTable can even help you with a micro grant to host your own Shabbat dinner.