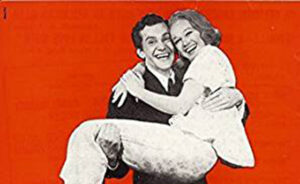 THIS SPRING THE Jewish Federation of the Greater San Gabriel and Pomona Valleys’ Jewish community theater ensemble, the JFed Players, are bringing Sheldon Harnick and Jerry Bock’s “She Loves Me” to the local stage. Fresh off a recent Tony-winning Broadway revival, the play “She Loves Me” is a timeless romance and crowd-pleaser that’s been thrilling audiences since its Broadway debut in 1964.

“It’s considered one of the most charming stories in musical theater, said Cantor Judy Sofer, the Cultural Arts Program Coordinator for the Jewish Federation in a recent phone call. Sofer has been the driving force behind the JFed Players since its inception. The group is now in its seventh season and Sofer is excited to tackle “She Loves Me.”

Sofer, who worked in musical theater before becoming a cantor in her late 30’s and has always enjoyed being involved in theatrical productions. The idea to form a community theater group for the Jewish community came to her while she was serving at her former pulpit in Pasadena. “A lot of people that didn’t want to come to services, that weren’t religious, but like the idea of being connected to the Jewish community, would come and get involved in the shows” that the synagogue put on,” she said. The JFed Players was formed to fill that niche.

While the actors are unpaid members of the local community, many have acting backgrounds. “A lot of our people are people who did more professional work when they were younger, in their 20’s, then went away and became lawyers and doctors,” said Sofer. “We have people that come in all the way from Rancho Cucamonga.”

The JFed Players present two productions every year, a musical in the spring, and a straight play in the fall. Past productions have included “Damn Yankees,” “Rumors,” “Once Upon a Mattress,” and even an adaptation of “The Twilight Zone.”

“In most cases, if they were musicals, the composers and the lyricists were Jewish,” said Sofer. In the case of the straight plays, writers like Rod Serling and Neil Simon were chosen for their Jewish roots. “You don’t have to be Jewish to be involved” in the production though, said Sofer, noting that several non-Jewish actors have participated in the past.

Doing community theater presents its own unique challenges. “We are very, very inclusive… not everybody gets the parts they want every time, but we try to bring everyone in in some way; maybe not on the stage, but behind the stage,” Sofer said.

While the musicians and directors used for the shows are pros, and they received some set-building help from people like Frank Jones of the Candlelight Pavilion, much of the crew is composed of volunteers as well. They’re always looking for people who want to help.

“These people are so dedicated. They’re so dedicated. I’m seriously amazed by it,” said Sofer. “We’re a family. We see each other a lot. We’re safe. It’s a safe place to be. I think that’s really important.”

The dedication of the JFed Players has even caught the eye of places like the Pasadena Playhouse, which invited them to do readers theater at the Playhouse for Holocaust Memorial Day.

“She Loves Me” is in many ways the perfect sort of musical for a community theater, according to Sofer. “First of all, it’s not a huge cast, and it doesn’t need a really big ensemble.” It’s also light on difficult choreography, which makes it easier to concentrate on the singing and acting, which Sofer always hopes to raise to the highest level.

Sofer’s long term goal to one day purchase a facility for the JFed Players, which would allow for more performances and more productions in the future. She hopes there’s someone out there in the community with a love for theater who might help make that happen, though she’s always happy for any help they can get, financial or otherwise. “If they want to underwrite part of the show… they can do that, and we will put it in the program,” Sofer said.

“Being in a show, in my opinion, is about the journey,” said Sofer. “The performance is the cherry on top, you want to do a great job, you want everybody to love it, but when you’re working on a show for three to four nights a week for two months, it’s about the journey.”

Jonathan Maseng is a contributing writer for Jlife magazine. His work has appeared in The Jerusalem Post Magazine, LA Weekly, The Press Enterprise, and The Jewish Journal. He also writes regularly about the New York Mets for SB Nation’s Amazin’ Avenue.