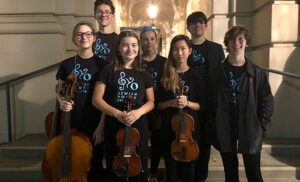 Have you ever thought how much fun it would be to play Klezmer music? The exuberant melodies just make you want to dance! Or to play Israeli folk songs around the campfire while everyone joins in, either in song or instrument? Sharing the traditions of our people is what brings us together: food, holidays, and music—especially music. That’s what happens in the Jewish Youth Orchestra of the Jewish Federation of the Greater San Gabriel Pomona Valleys—a rich cultural experience for our young musicians.

One of only a handful of Jewish youth orchestras in the United States, the JYO was founded by Janice Mautner Markham and Leeav Sofer 8 years ago with a mission to teach and enhance musical skills to Jewish youth whilst providing an education in the enormously diverse range of music by Jewish composers. Through classical music training, interwoven with Jewish cultural education, the young participants are provided an opportunity to learn about and perform pieces from different Jewish musical styles and traditions, thereby broadening their musical repertoire and enhancing their Jewish education and connection to the community. As Rabbi Adolph Jellinek once said, “The inner history of a people is contained in its music.” It is just that music on which the JYO focuses.

The members of the JYO not only learn about Jewish instrumental musical tradition, they solidify their connection to their Jewish heritage and community by participating in local events. “It was especially meaningful to me when JYO played at City Hall for a Holocaust memorial commemoration. Having people hear our music as part of a memory was important for us, and I think not only for the older people there, but the kids in the audience as well. It let them know that we have the power to keep our culture and spiritual life alive,” Raina, age 16. Music is an integral part of life and culture. It has been present throughout time in religious and secular celebrations and life cycle events. The ability to learn and perform sacred and secular melodies is vital to keeping the Jewish culture alive. “JYO gives us a chance to learn about the different types of Jewish music, especially Klezmer! I love that we can relate the music we learn to other cultural experiences we have,” Raina.

These young musicians also form friendships with one another that will last for a lifetime. As Maya age 15, states: “JYO is, and has always been, important to me because I get to enjoy what I do alongside the people I love, while also capturing the Jewish culture through music… but I also have gained so much wisdom already with respect to serving the community . . .”

The future is with our youth and the ability to provide young musicians in our community with a program that can nourish their musical souls as well as underscore their Jewish heritage is crucial. The JYO gives these young musicians the opportunity to “. . . play Jewish folk songs and Shabbat music that we wouldn’t usually get to play outside of JYO,” Czeska age 14. The fact that they also build strong relationships with each other while building confidence in their musicianship is an added benefit. “It’s rare to have the opportunity to perform traditional Jewish music with friends. JYO provides this, and it’s always a highlight of my year,” Damien age 15.

Since its inception, the JYO has been a regular guest at the Jewish Federation SGPV’s annual Festival of Jewish Music in December and at Shir Delights, the Kol HaEmek Jewish Community Chorale’s annual Spring concert. In January of this year, they performed an emotionally moving set on the steps of Pasadena City Hall as part of Every Person Has a Name, the Jewish Federation’s 25-hour Holocaust vigil commemorating the UN International Holocaust Remembrance Day. The orchestra has also performed at this year’s Jewish Food Festival, the Skirball Cultural Center, the Pico Union Project, and other venues throughout Southern California. In 2020, the JYO has been invited to perform as part of the Violins of Hope Concert series, a collection of concerts celebrating a collection of over 60 stringed instruments resuced from the Holocaust and restored.

If you have not already done so—or even if you have—please check out the next performance of the JYO. You will be amazed at their passion and musicianship. New members are always welcome! Please contact the Jewish Federation office for more information.

LORI MCKENNA IS A CONTRIBUTING WRITER TO JLIFE MAGAZINE.

The “UNITED” States of America