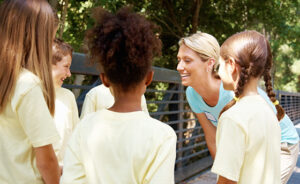 STATISTICS SHOW THAT the Jewish summer camp experience has a tremendous effect on children and their Jewish identity. The impact of Jewish camp is immediate. When I returned from camp I encouraged my mother to start lighting Shabbat candles – something we didn’t do as a rule. As it is written on the website, jewishcamp.org, “It has been shown that children who have Jewish camp experiences are more likely to become adults who value their Jewish heritage, support Jewish causes, and take on leadership roles in their communities.”

While there has been far less research done on Jewish day camps – results have been seen. According to Eileen Price, Founder and Executive Director of In the City Camp, “Jewish day camps can also provide a summer experience that produces a strong, positive connection to Judaism, the Jewish community, and Israel. It also seems there is plenty of room for additional Jewish camping options.”

“According to the Foundation for Jewish Camp, of the 750,000 camp-age Jewish children in North America, 75,000 attend Jewish overnight camp each summer,” adds Price. “We know another 100,000 attend JCCA day camps. Even if we estimate that 50,000 kids attend independent Jewish day camps like In the City Camp, that still leaves 525,000 camp-age Jewish kids who are not attending a Jewish camp. The foundation also confirmed that, due to lack of capacity, many popular Jewish overnight camps have to turn campers away each summer.”
Jewishcamp.org reports that over the last couple of years “day camps reported 62% of campers were returning children and 38% were new to the day camp. The stable and high numbers of returning campers can be seen as a healthy sign, pointing to the ongoing demand for Jewish day camps in the marketplace.”

For those campers who are turned away because of lack of room as well as for those who may not be ready for overnight camp, Jewish day camp is just the answer. My parents sent me to overnight camp from the age of 5 for eight weeks every summer. There was only one visiting weekend and when my parents had to leave I cried. Now I didn’t want them to take me home, I wanted them to stay “up the road”. So even though I was quite young and missed my parents, I was obviously having too good of a time to want to go home. I believe a day camp would have been less traumatic, but I was in beautiful camp in the mountains – living out my father’s fantasy.

For those children in the San Gabriel and Pomona Valleys, the Jewish Federation’s “Camp Gan Shalom runs two distinct programs simultaneously: Kehilla for entering Kindergarten through 5th grades, and Manheegim for those entering 6th through 9th grade,” writes Aaren Heller, Camp Gan Shalom Director. “Both programs offer the community’s Jewish youth an opportunity to live Judaism, not just learn about it.”

“Gan Shalom brings Judaism and fun together in the summer,” says Rabbi Jonathan Kupetz of Temple Beth Israel in Pomona. By doing this, “Gan Shalom helps shape a positive and joyous Jewish identity. My children loved Gan Shalom and attended until they started going to Jewish sleep-way camp.”

As one of the two synagogues where the program is held, Kupetz has seen for himself the children enjoying the activities and participation in Jewish life. The programs are held from June 18th – July 13th in Pasadena at Pasadena Temple & Center; from July 16th to August 3rd in Pomona at Temple Beth Israel.

There are several advantages for parents to send their children to Jewish day camp. One is that “Gan Shalom brings together Jewish kids from the area who otherwise would not know each other,” remarked Kupetz. This can create long lasting friendships.

Gan Shalom, like many other day camps offer short (one or two weeks) and flexible sessions so a child can try the experiences without a heavy financial burden. Parents also have the opportunity of hearing about the child’s experience every day.

“At Camp Gan Shalom, young people will develop new skills and explore new spaces,” adds Heller. “Most importantly, it is a place where they will create new memories and relationships that go beyond the summer and last a lifetime.”

Rabbi Florence L. Dann, Beit Sefer Director of Temple Beth Israel of Pomona has been a contributing writer to Jlife since 2004.